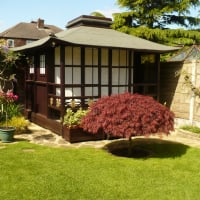 Doghouse Riley South ManchesterPosts: 347
October 2021 edited October 2021 in Wildlife gardening
As my mention of "our" fox on another thread promoted some interest I thought this might have a wider appeal.
I took all the photos through the glass of our French windows with a little Lumix camera on "zoom." As some were taken at dusk the quality of those isn't good.
This is "Fiona" as we called her having a drink from our, "frog pond." 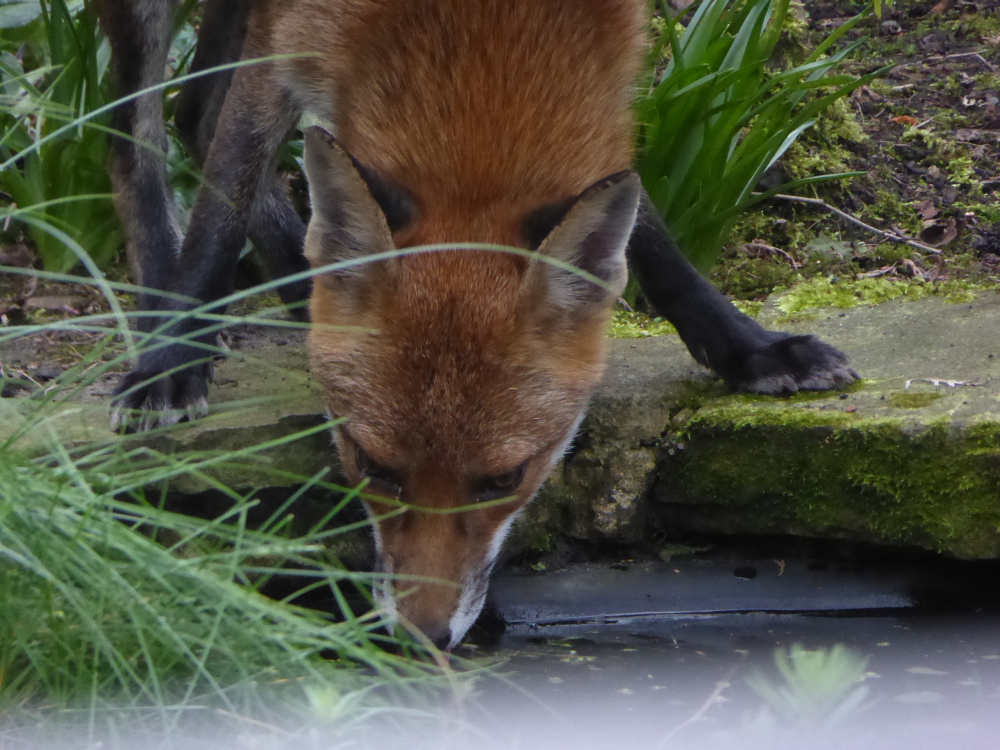 We've always had foxes in our garden from time to time. But this one started visiting our garden in February 2017.
She'd come and sit on the patio about fifteen feet away from the French windows and stare at us for a few minutes and then leave. She'd come back the next day and then every few days and do the same thing. I think she was just "sussing us out," looking for a reaction.
We then hardly ever saw her. But then at the end of March I looked out of the kitchen window one day and saw this. Fiona with three cubs, one under the tea-house  steps.
I wasn't aware they'd been listening to Motown from the jukebox over their heads since they were born. "They never complained." 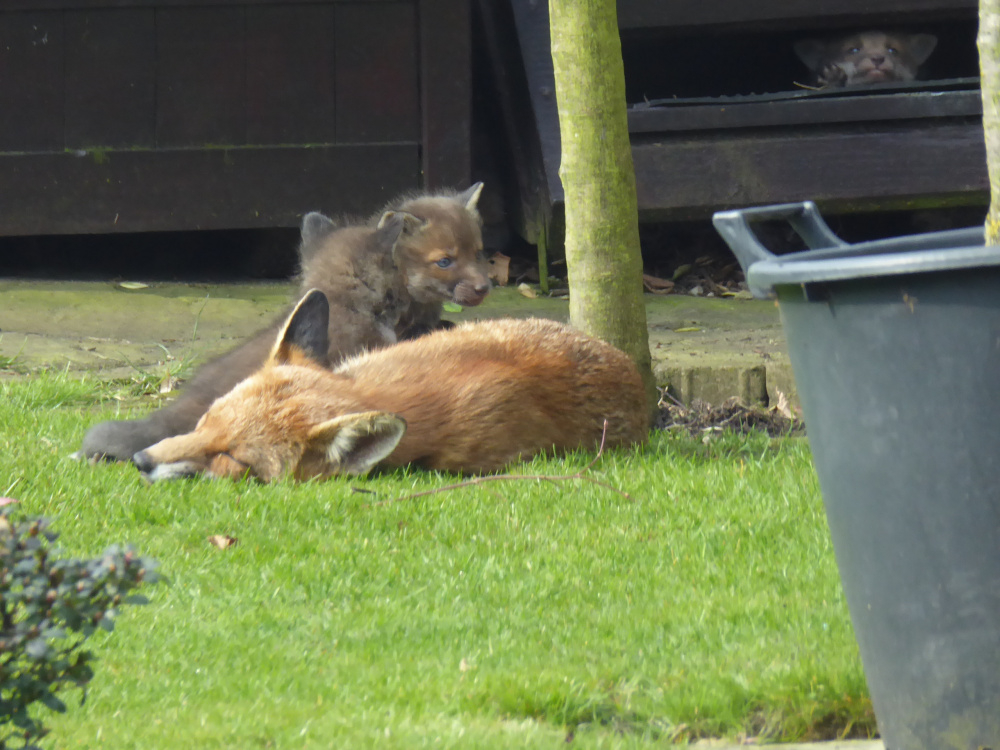 She'd obviously had a litter under the building.
I built the teahouse in 1987 and put it up on low brick piers.
There are Victorian style skirting boards attached to the base on three sides but finish a couple of inches above the path. But I didn't put a skirt on the back so as to provide good ventilation under it and prevent damp, so that's where she'd got under it. 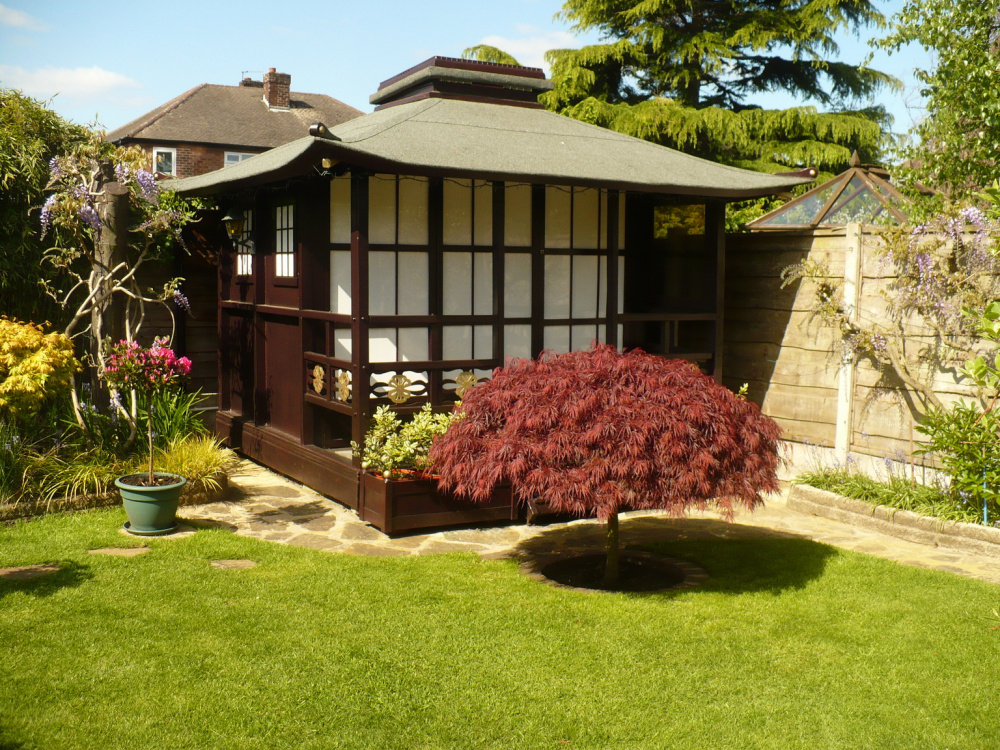 Once the cubs had left home I put a sand and cement screed down between the back fence and the building and made a sturdy wooden frame covered in double layered chicken wire and attached it to the base to prevent further "occupation" and preserve the ventilation. 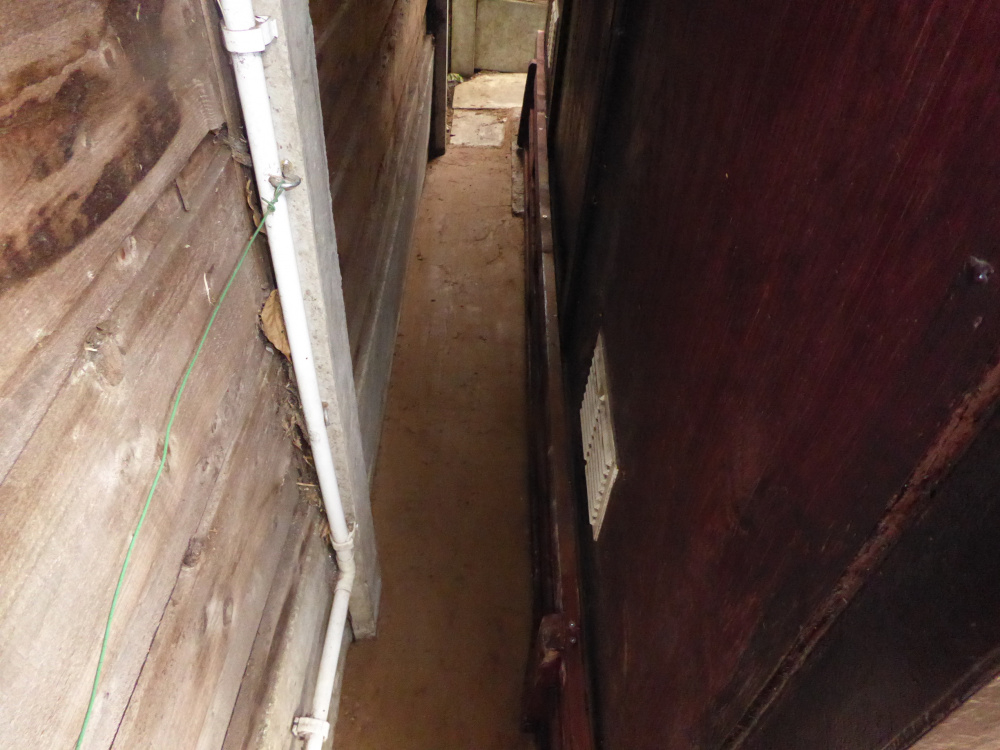 Over the next few days we found that she actually had six cubs.
She'd often feed them in front of the tea-house during the day. 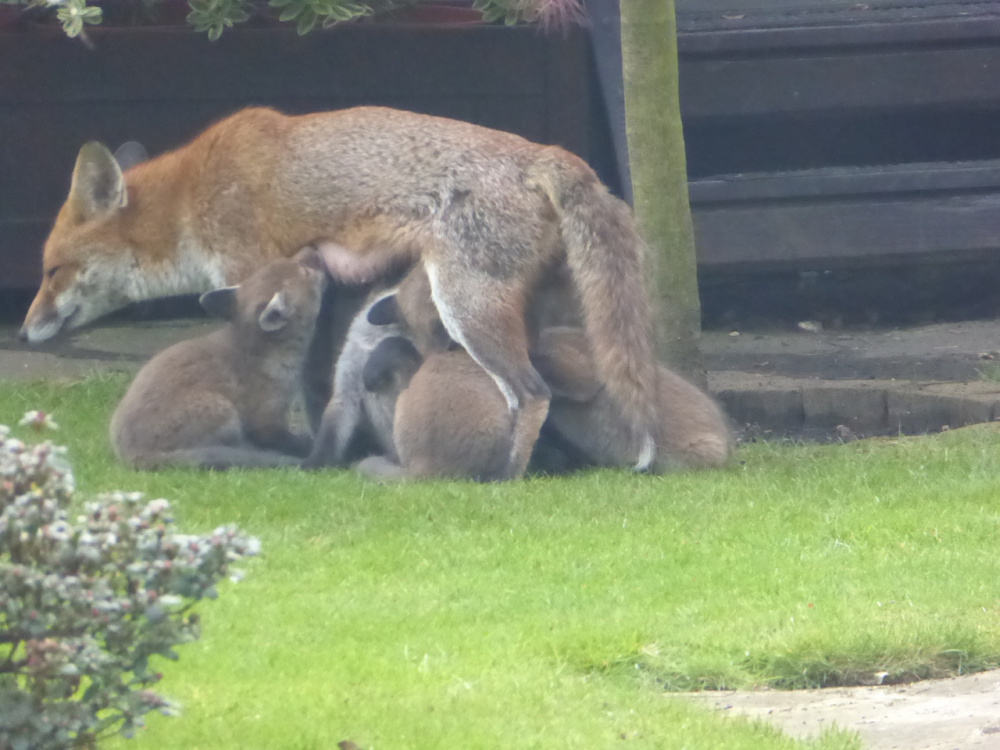 They only came out at around dusk  on their own,  if she wasn't there and  at first kept to the bottom of the garden.
Before they came out I used to leave a bowl with some cat food and some dry stuff for them outside the tea-house and a bowl of water each night.
They were quite endearing 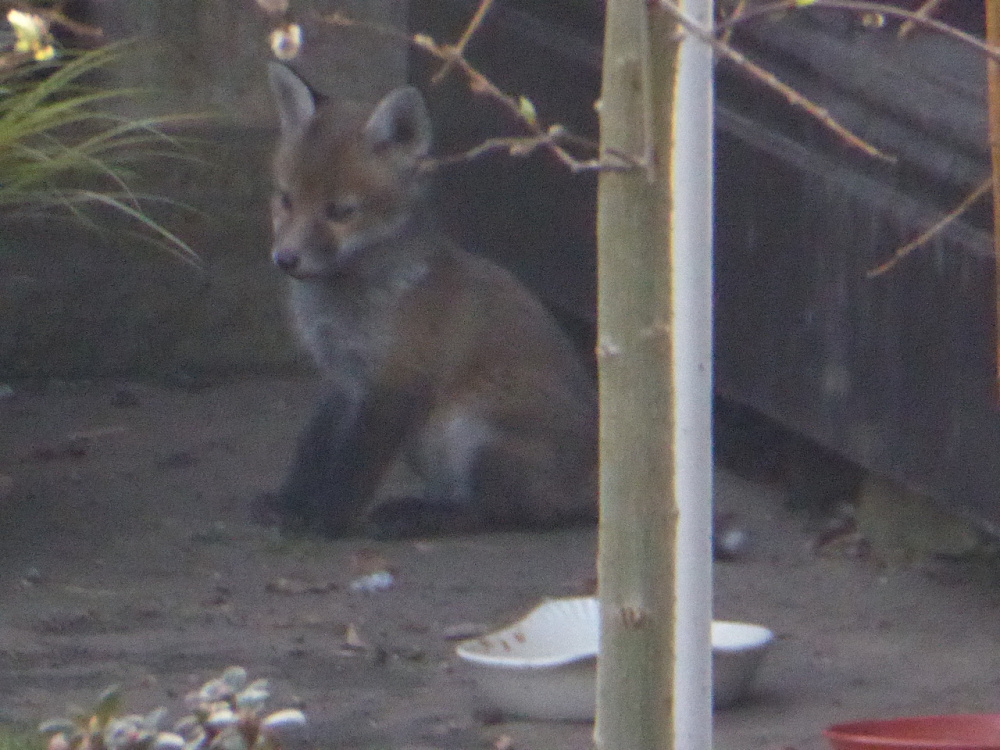 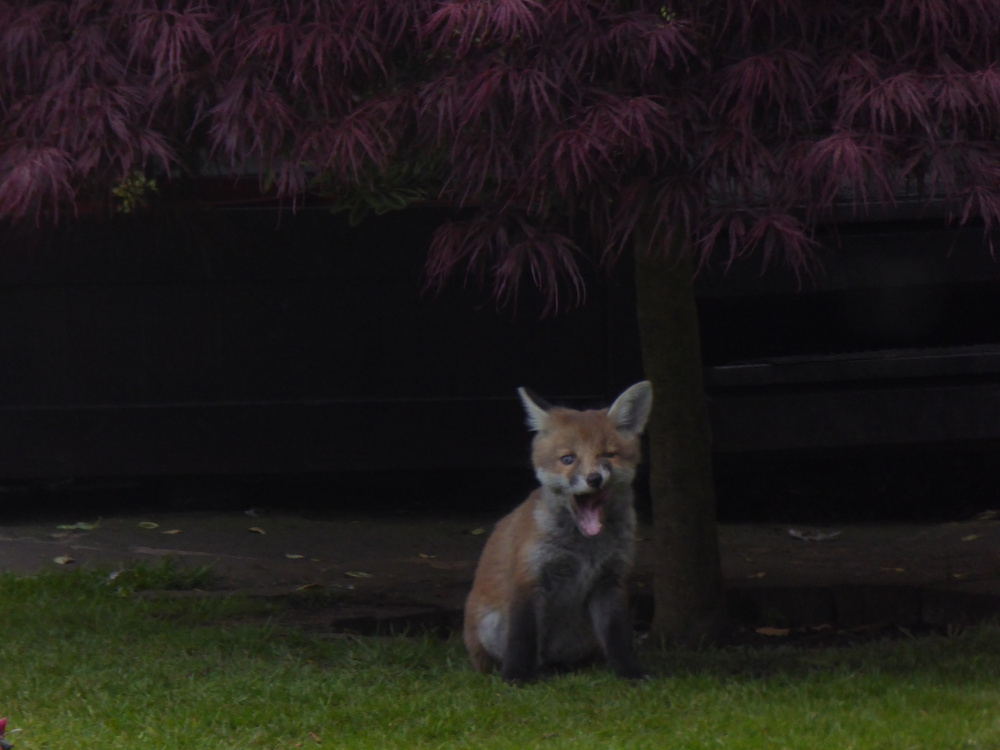 As they got older, they got braver and would come down to the French windows to eat the birds dried meal worms I left out for them..
"Is it alright for me to have some of these?" 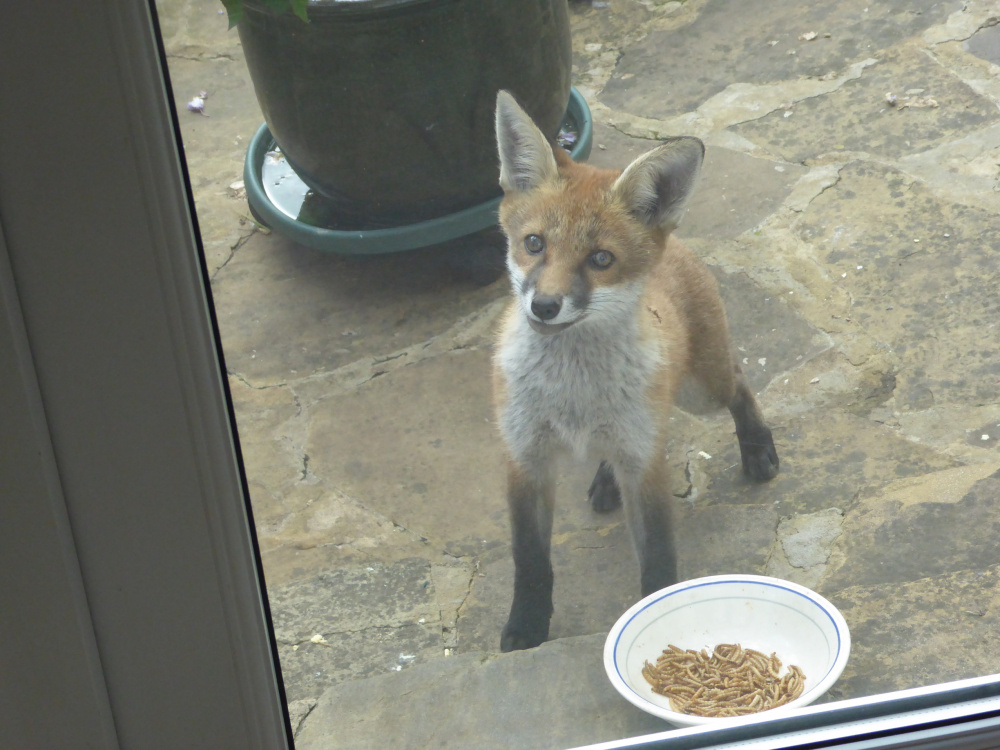 "You know what will happen if you say no, don't you!" 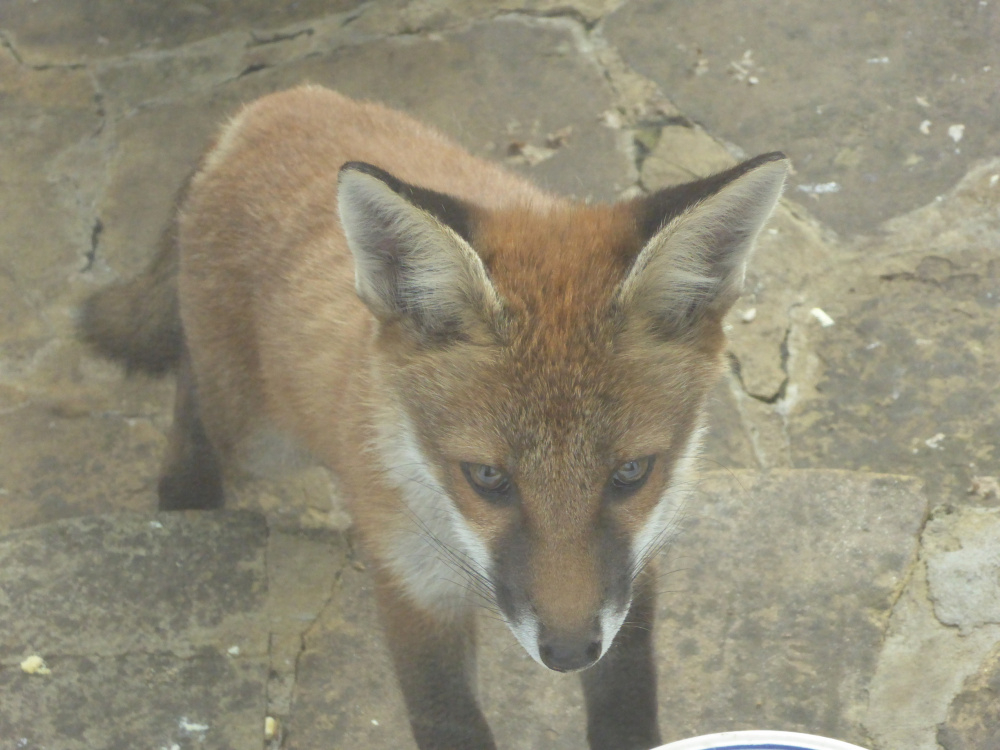 They played "chase" running up the two tea-house steps and jumping off the veranda.
The dirty paw marks on the windows of the doors got progressively higher as they grew, but they always looked clean.
I provided them with a sturdy upturned box to practice their "pouncing." 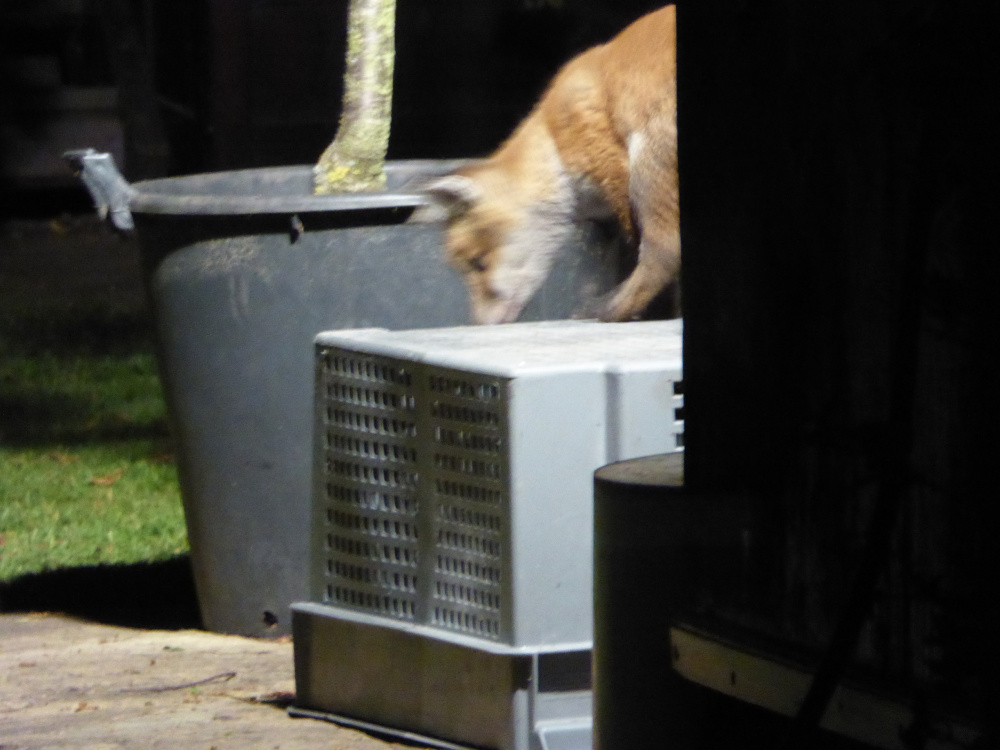 Though they preferred jumping off the big tub as it was higher. 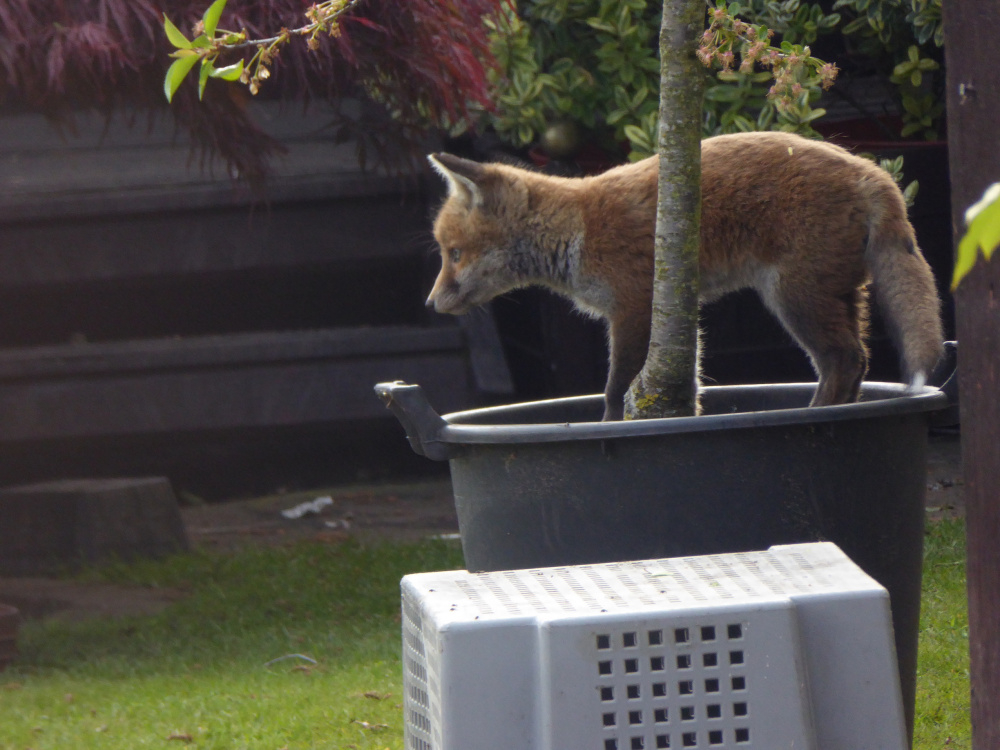 Fiona didn't like them being out in the day and if one was out when she got home it'd get a telling off. 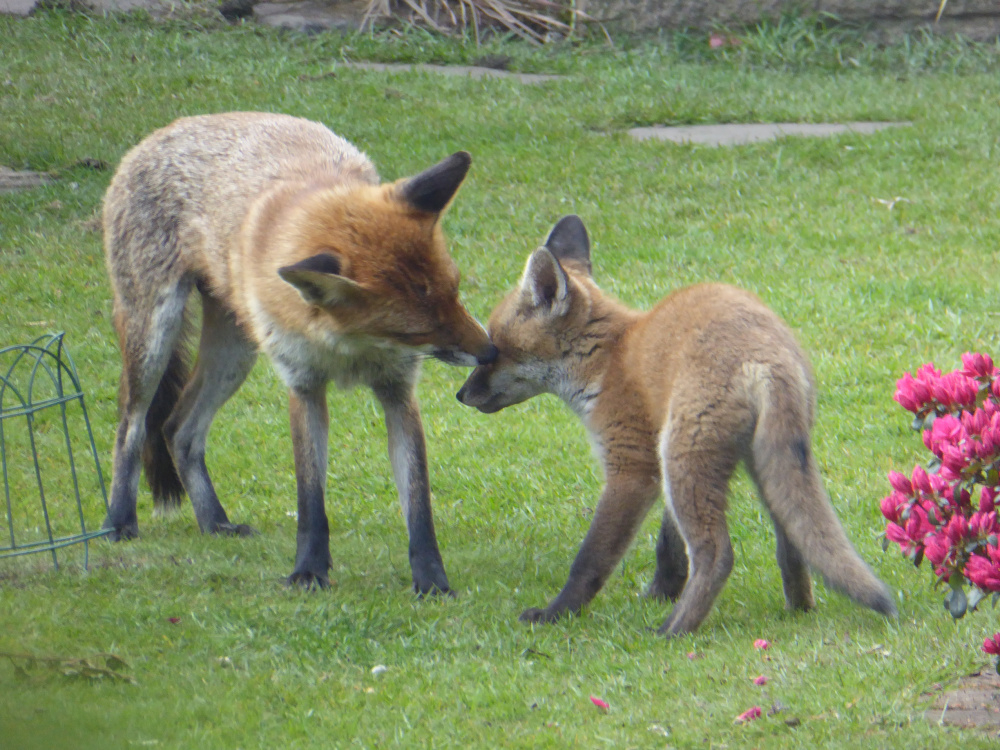 Sometimes motherhood was a bit wearing and she'd relax under one of the acers. 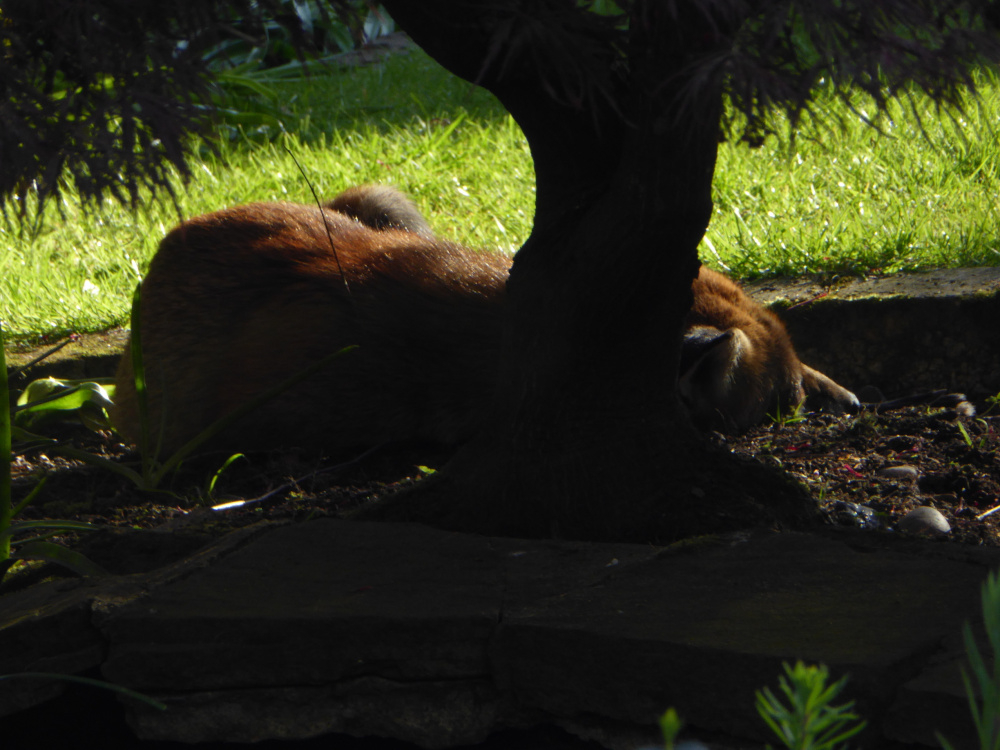 She stole kids soft toys from other gardens and brought them home for them  to play "chase" with. They'd all chase after the one with the toy, round and round the garden. I put a net over the koi pool in case any fell in.
One day my wife called out to me in the other room "Quick! One's got a blackbird in its mouth and the others are chasing it!"
I explained there was nothing I could do, as it was "nature."
The following day I went out in the garden and found the "blackbird" on the lawn. It was the small black triangular nozzle from  a vacuum cleaner their mother had found.
They grew up very quickly and eventually she took them out of the garden over three days, two at a time.
I'd seen her the previous week  teaching them to jump up on top of the Japanese lantern at the top of the pool waterfall,  from where they'd be able to scrabble over the fence. The only way they could get out of our garden.
We never saw them again once they left as they don't return, though we did hear one or two caused a bit of  damage in other neighbours' gardens.
Ours quicky recovered, just one or two small holes in the lawn and they'd flattened most of the end bed.
We didn't see Fiona for two years. We could recognise her, we'd seen her so often.  She returned just once at the beginning of 2019, probably to check out her old den, but of course it was now inaccessible.
These are our last photos of her on that day as she made her way out over the lamp. 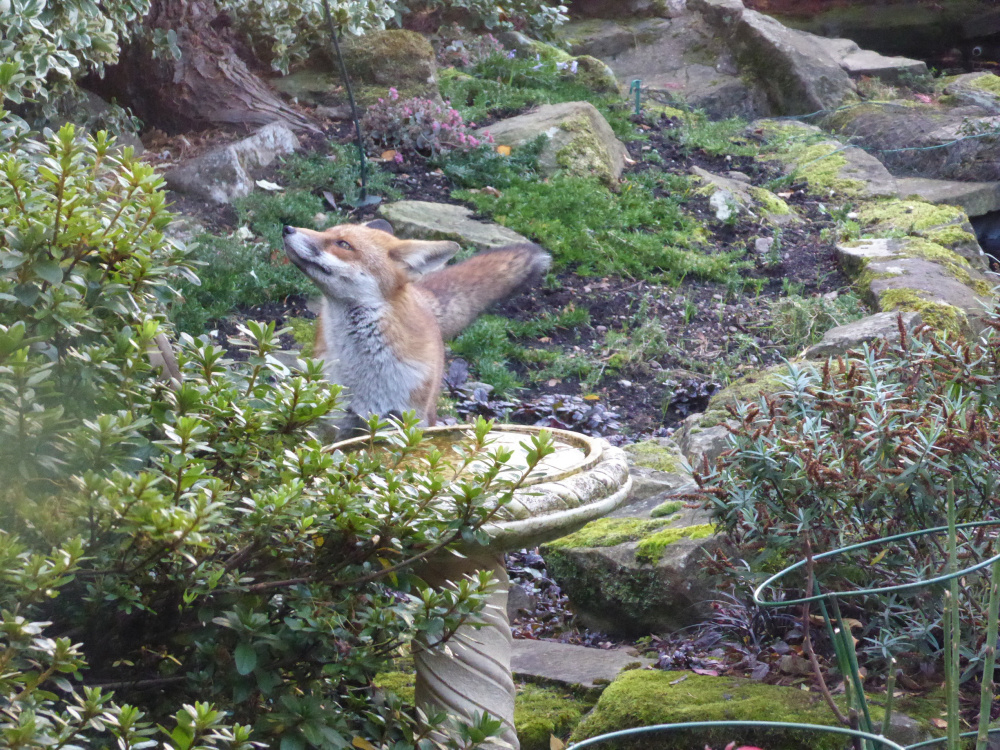 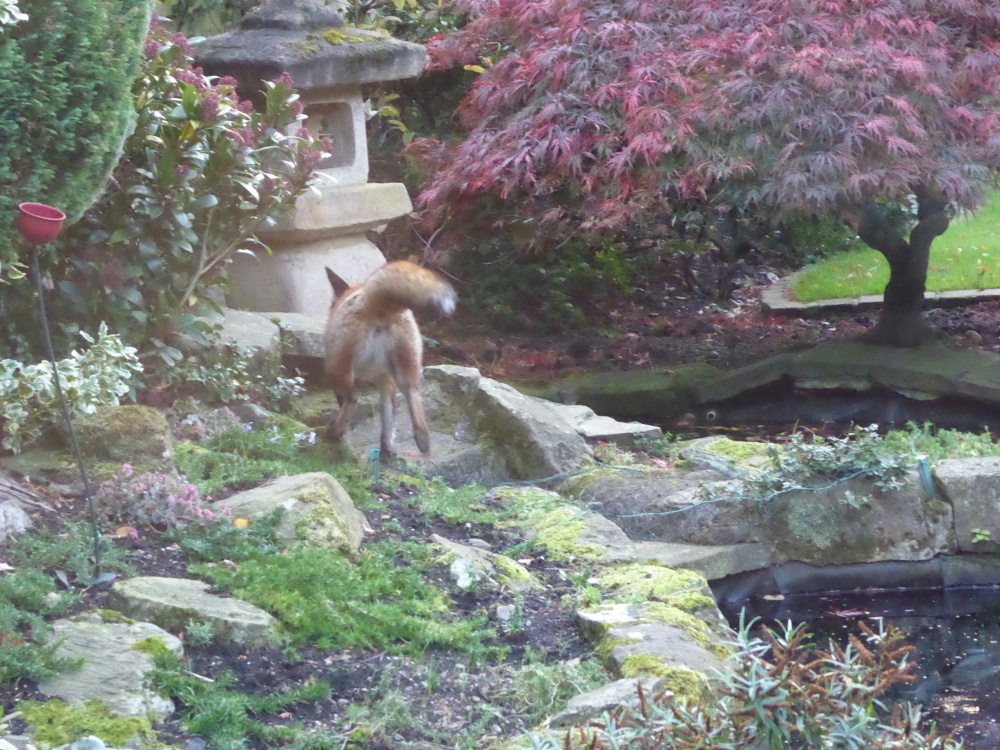 I've a lot more photos and several videos like this one. 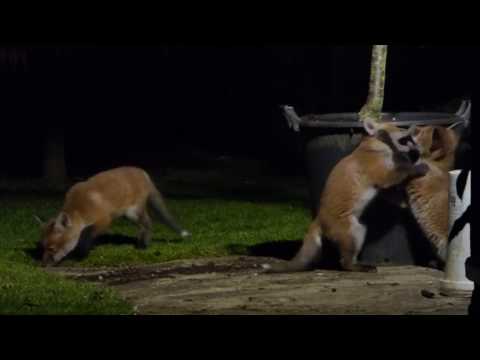 We enjoyed the experience and felt we'd done our bit without interacting with them, but it's not an experience we'd like to repeat... I dunno though.....
16
«12»