Can I grow honeysuckle up a tree?

peroroncino Posts: 52
November 2020 in Plants
Probably my silliest question so far but please bear with me.
Recently, my "overgrown" ash tree has been trimmed (rather badly) and the large amount of arboreal ivy that was in the canopy has been removed. All in all, not a great situation in terms of looks, health and habitats for wildlife - I found nesting material all over the fallen ivy, 20 years of habitat destroyed in a day because it had taken over the tree. Granted, the 100 year old tree may not live for much longer due to the botched job increasing the risk of infection by ash dieback disease but it will have at least a few more years.
I've put up some roosting pockets and will put proper birdhouses at the end of February but I'd like to undo my mistakes and offer some natural long lasting cover in the tree canopy. I don't have the space for a proper hawthorn hedge and although I'm creating a mixed honeysuckle trellis line along a boundary and a narrowish pyracantha hedge, these will take a while to become living-worthy for the birds. I read that butterflies, bats and moths also use ivy to hibernate/roost in trees and they can't exactly do that now (luckily no bats were roosting when cut).
My question is, can I grow another climber such as honeysuckle up the tree to provide the same sort of cover and benefit as the ivy did, but without the negatives of the ivy? I know I know, I just removed a problem-causing climber and now I want to put another one but my thinking is that honeysuckle isn't as vigorous or dense as ivy. I mean, both are vigorous climbers but honeysuckle can't go to the extent that ivy can. I basically want it to grow bushy around the "v"s in the branches which is where birds make their nests.
The tree itself was pollarded at some point in its life so the trunk is only 2.4m tall and the main stems reach up to between 10-15 metres, so the honeysuckle would get to about halfway up I guess. How would I enable the climber to get a footing in the branches and wrap around them?
Perhaps my idea is too outlandish...
As you can see, the left is what it looked like - bad for the tree but great for nature - and the right is the current state - more a wooden structure than tree. 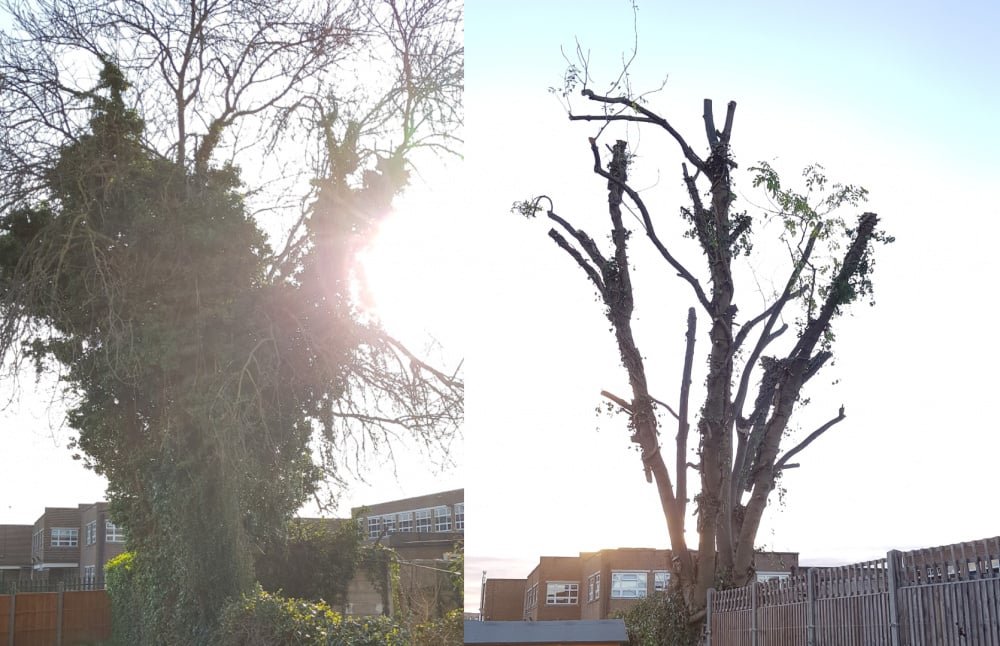