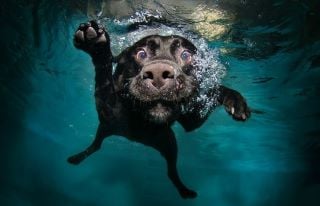 While walking my dog on the edges of a field of grain, I saw something sitting on the edge of the field.   It was about 9-12 inches high and what I saw appeared to be a white rotating head about my fist size.  Very fluffy and round.     I called my dog and put him on lead before he saw it and walked closer.   It appeared to have a round fluffy black and white face and wasn't moving, just turning its head.   I then noticed my dog was rolling in what was the remains of another bird...mostly grayish feathers...I would have assumed wood pigeon if it weren't for this other thing just standing there staring at it (heartbreakingly). I'm guessing it's young and therefore stupidly not moving even though I (and my staffie) were about 10 feet away.  I didn't get closer because I didn't want to hurt it and I have a pathological fear of birds...especially fledgling or injured or dead ones.  I've looked at pictures on RSPB and BTO and can't find it.   Not brown enough for owl.   Really all I saw was white fuzzy round face and some black somewhere, I think on head but I don't remember now.

Anyone have any ideas?   I'm in  Wiltshire.