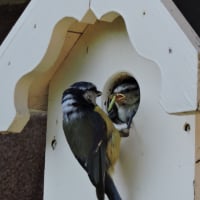 Now this box is sited on the side of the garage pointing in a south-westerly direction. I've since read this is not good due to sun / rain. However last year was a pretty decent summer (warm) and this didn't seem to present a problem. Maybe I / the birds were lucky? So my question is whether or not I should re-site it? I can move it to the end wall of the garage which would then be an Easterly direction.

Second question. My partner has just received a bird box / camera combo which she is keen to see get used this year. Is it too late to put it up this year and would it be acceptable to put it on the opposite end corner to the existing box? I have read that boxes shouldn't bee too close to one another but I don't know what is considered 'too close'. The garage is a pitched tiled roof affair so there's some substantial 'real estate' between opposing diagonal ends of the structure.

Thanks for your advice.