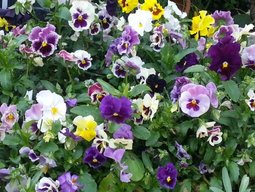 I planted a Clematis 'Mme le Coultre' years ago and it now has more than thirty stems I am tempted to try and divide it to give half to my brother who has admired it, and to calm it down a little in my own garden. My idea was to wait until spring and then chop through it with a spade and dig out one half trying not to disturb the other half too much. Is this feasible or will I kill it?