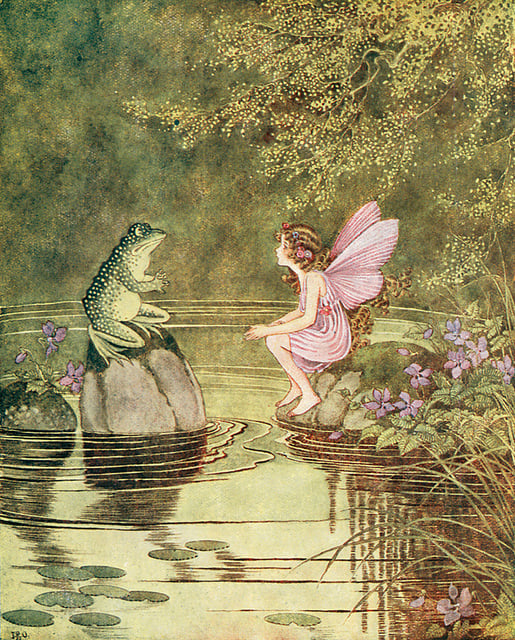 With humble apologies to Clement Clark Moore for fiddling with his lovely poem….

'Twas the night before Christmas, when all through the house

not a creature was stirring, not even a mouse.

The stockings were hung by the chimney with care,

in hopes that St. Nicholas soon would be there.

The Forkers were nestled all snug in their beds

while visions of fairy cakes danced in their heads.

The tree was all dressed and I sat on the top,

my wings all a-sparkle, newly bought from the shop.

Then out on the roof there arose such a clatter

I sprang from the tree to see what was the matter.

Away to the window I flew like a flash,

with Dove flying behind me, I threw up the sash.

The moon shone so clearly on new fallen snow

and glistened and gleamed on the scene down below.

Up above rooftops in a sky bright and clear

was a miniature sleigh and eight tiny reindeer.

With a little old driver, so lively and quick

I knew in a moment it must be St. Nick.

More rapid than eagles, his coursers they came,

and he whistled and shouted and called them by name :

On, chicky and Tetley!”

He shouted to Dove “Make room for us all,

clear a space in the snow, in case we should fall”.

The Forkers all woke and came running to see,

they chattered and giggled and shouted with glee.

Excited and happy, they watched with delight

as St. Nick and the reindeer appeared through the night.

And then in a twinkling, high up on the roof,

the reindeer were pawing with each little hoof.

As I drew in my head and was turning around,

down the chimney St. Nicholas came with a bound.

He was dressed all in fur, from his head to his toes

and his clothes were all blackened - soot covered his nose.

A bag full of gifts he had packed with great care,

a bundle of good things all gardeners could share.

Compost and dibbers, and pots big and small,

secateurs, shears – he had plenty for all.

Tree ties and labels, and bulbs for the spring,

trowels and cloches, and big balls of string.

He waved to us all – far too many to mention -

not enough room here without an extension.

But we waved back together, all stood in a row,

The 'Steves', Bob the Gardener, and artjak and Lyn,

Runnybeak, Clari – they squeezed themselves in.

to catch up with us here, and to laugh and make merry.

DavidK caught the scene with a beautiful snap,

he dressed up for the task in an elf suit and hat.

Gardengirl's pallets had been put to good use,

as a table laid with a banquet, including roast goose.

And KEF wore her hotpants and handed out drinks,

to enormous applause and a few cheeky winks.

Pansyface, philippa, Pat , Edd and me

Lily Pilly and Yvie handed out cups of tea.

Hosta stood by the fire – a great blazing affair,

he was roasting his chestnuts, he just had a pair.

hoping mince pies and chocolates would soon be passed round.

But we all turned our heads to the visitor there

who threw off his red hat to r

It's a place where beautiful isn't enough of a word....