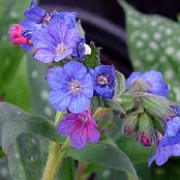 Always fancied growing these, but have had no sucess from seed-used multi purpose - why?

Believe they are tricky to grow form seed, and establish in the garden - what are your tips for success?  Even Monty struggled and had to buy some well-established plants.

Just received 2 large plugs - 2.5 inches high- should I pot on or plant out, and what compost should I use?  My soil is clay and not sure on the PH, but belive is neutral to alkline going by what I can grow.  Peiris with supplements, pink hydrangeas, even tulips survive the clay.

Also received  some bareroot hostas should I pot on first and plant out in a few weeks?