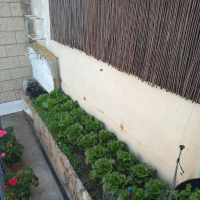 In December I prepared various beds, weeding manuring etc... then, I sheeted them up with black 1000 micron visqueen.

Today when I pulled back the sheeting there was a carpet of fine weeds happily growing underneath the sheeting.

I presumed black sheeting would surpress them but that has not happened.