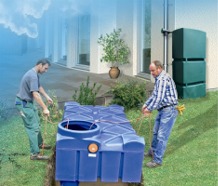 How can we beat the drought?!

It’s only March but gardeners could face hosepipe bans with drought status already declared across large areas of England.

To escape the worst of the drought conditions, gardeners have to consider whether there’s anything more they can do to capture and save water. More areas across the UK are likely to be affected as we continue to experience a prolonged period of very low rainfall.

The typical 200 litre water butt does not last long in drought conditions and this same butt will overflow in no time with the torrential downpours climate change is giving us. The time has come for gardeners to invest in large volume rainwater harvesting tanks to try and avoid the worst of drought conditions. In addition, new figures have been released showing that the average water and sewerage bills in England and Wales will rise by as much as 8.8% next year so the need to harvest rainwater is more important then ever.

You can buy tanks ranging upwards from 1500 litres in size. For the garden and other outdoor uses, above ground tanks are suitable and are a cheaper choice than underground tanks. Systems come with a filter and pump, and automatic mains backup is an option.

Rainwater can, however, also be used in the home for WCs and the washing machine. Each of us uses 150 litres of water each day, and rainwater harvesting can cut mains water consumption by half. If rainwater is to be used in the home as well as the garden, underground tanks are better as the water stays cool and fresh and the tank is out of view. Rainwater from the tank is either supplied directly to appliances, or pumped up to a holding header tank in the loft space to gravity feed where it is needed. The bigger the tank, the less likely is the rainwater to run out in a dry spell.

Since 2010, water companies have the right to impose stricter rules during water shortages. Now hosepipe bans not only cover irrigation and washing private cars, but also extend to include amongst others, topping up pools, hot tubs, ornamental ponds and fountains whether with hosepipes or permanent plumbing.

And it is clearly becoming really necessary. Building Regulations and the Code for Sustainable Homes have set mains water use limits. We can be economical in our mains water use but why throw treated water down the toilets which is 30% of our daily use? Furthermore, rainwater harvesting is seen as one way of helping absorb excess rainwater in terms of flood threats. This is of particular concern to planners nowadays

Water bills can be greatly reduced, and with the latest bill increases announced, the payback on installing a system ranges between 6 and 10 years.