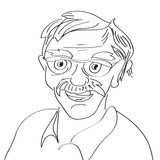 I am new here so just thought I would say hello!

I can't seem to find any specific threads on a fungi problem I am having with my tree. The symptoms suggest a dreaded honey fungus. The tree seems to have been dying with branches falling off very slowly, and it did seem to get very pale colourings quite early on at the end of summer. With closer inspection I have seen some horrible looking mushrooms. Everything on the websites I have checked suggest so, (http://apps.rhs.org.uk/advicesearch/profile.aspx?pid=180) and  (http://www.davefordtreecare.co.uk/the-laws-of-arboriculture-tree-legislation)

Does this sound like honey fungi? If so does anybody know the point at which there is no turning back? As it seems it is pretty uncurable from what these websites are saying.

If not what could it be?