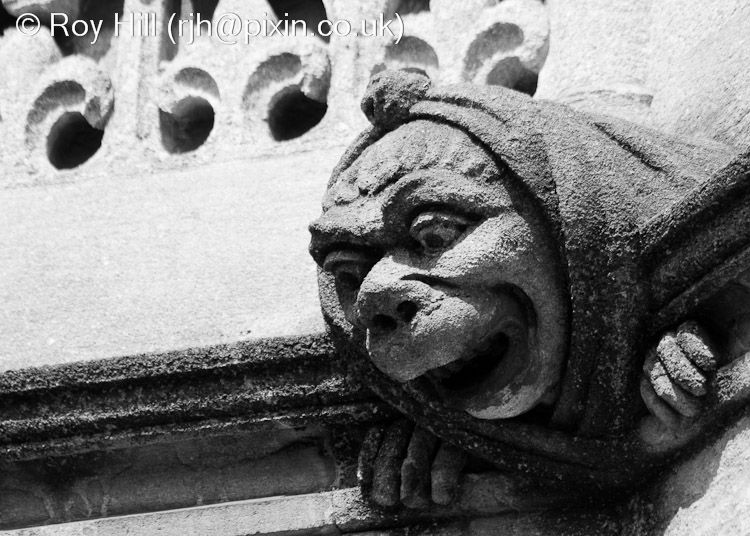 It appears that the ailing birch that was felled in the garden earlier this year is now a host for honey fungus. The clusters of fruiting bodies (second 'flush') certainly look the part. A little research gives me a glimmer of hope, as it appears that there are (at least) six individual species in the UK and only(!) a couple are serious pathogens. Total removal of the stump/roots isn't really an option. It lives at the top of a substantial retaining wall. Removal would mostly likely interfere with the integrity of the retaining wall and the quite substantial amount of soil which it retains. To give an indication, the wall is drystone and around 2m in height; not the sort of structure you would want to knowingly disturb in any great way. On top of that the tree is of such an age that the trunk has grown around and enclosed a rather serious piece of ironwork. That would definitely not be saw/chainsaw/tool/chipper friendly.

I suppose all I can do is remove as much as I can (as and when time/weather/time permits) and see how it develops. If you see a despairing gardener in North Staffordshire over the next few years it may well be me. I suppose it is just as well that I am not averse to growing stuff from seed - that may well decrease the monetary losses if I have to replant affected stuff.

Not so much a 'what can I do?!' posting, but more of a 'oh dear, this could be interesting'. Sort-of phlegmatic. I have already availed myself of RHS resources regarding plant types which are more/less/least susceptible to infection by the nastier versions of armillaria. If it turns out to be one of them then there definitely won't be a "rose garden". (wry smile). Thanks to Monty Don as well, because I turned up one of his older articles from somewhere regarding armillaria.

Whatever happens I will be willing to share 'experiences'. If anyone knows of a reliable (cheap) way of getting the armillaria specie identified I would be grateful.