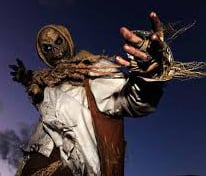 Just wondered if any of you have lost pots, furniture or greenhouses in the storms during the night.