Suggestions for shaded area of shrubs planted to hide fence. 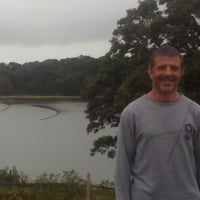 robairdmacraignil CorkPosts: 669
January 2022 in Garden design
Hi.
Weather has dried up a bit here so able to potter about the garden a bit more and plan out little projects for this year. I'm a bit uncertain about what to do with an area of flowers and shrubs that can be seen from the kitchen window but since it is at the back of the house is not seen very much and is fairly shaded. There are a number of shrubs that have done well and I want to retain but a long lived Erysimum Bowles's Mauve has finally died and needs to be dug out and buttercups need to be removed. I think I need to do something now about the outside corner spot where the Erysimum is being removed from.
The area seems popular with small birds so I want this tidy up to be done fairly soon so I can let them undisturbed over the summer. I had planted a Pieris forest flame that I had hoped would make a good display at the corner in question but after about seven years it has barely grown at all and I am coming around to thinking it may need to go somewhere else where it may benefit from a sunnier position. Regardless of the final position of the Pieris I think it may be worth while getting something new to make the outside corner look better now the Erysimum has died. I posted a video showing the area here and any suggestions as to what to plant there would be much appreciated. Thanks in advance for any responses and taking the time to read this.
Happy gardening!
https://www.youtube.com/user/sustainableveg/videos
0
«123»