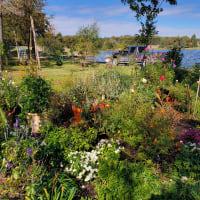 jamesholt Central texasPosts: 452
December 2021 in Fruit & veg
I'm always watching monty don use seed trays to start tomatoes.  He then painstakingly prickes them out into a larger container and then another larger container again.  Why not just plant them in the final container at the beggining?
0
«1234»