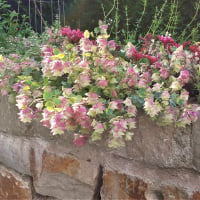 coccinella LuxembourgPosts: 194
October 2021 in Plants
I planted these 3 years ago and for the first three years they have absolutely respected their "4 o'clock flower" name, opening late afternoon. This year the flowers opened around 11 am and closed around 6pm on all plants whether they were placed south or north (they spread like mad so I have a little invasion now). In central Italy they don't open until 6pm or later, that's why they call them "belle di notte". Do they adapt to local light conditions?
When down go out and buy a packet of seeds
0