Fire North LondonPosts: 16,398
July 2021 edited July 2021 in Tools and techniques
For a couple of years I have been testing out different ways to limit slugs in my front and back gardens. Conventional tools such as using wool, egg shells, coffee, gravel, copper bands, seems to have slowed them down in my gardens not one bit. But I wanted to run some small 'citizen science' tests to measure results more accurately, rather than just by impressions.
- - -
I usually put vulnerable plants (such as dahlias) in pots, but here slug flock to a phlox plant in a tall pot. 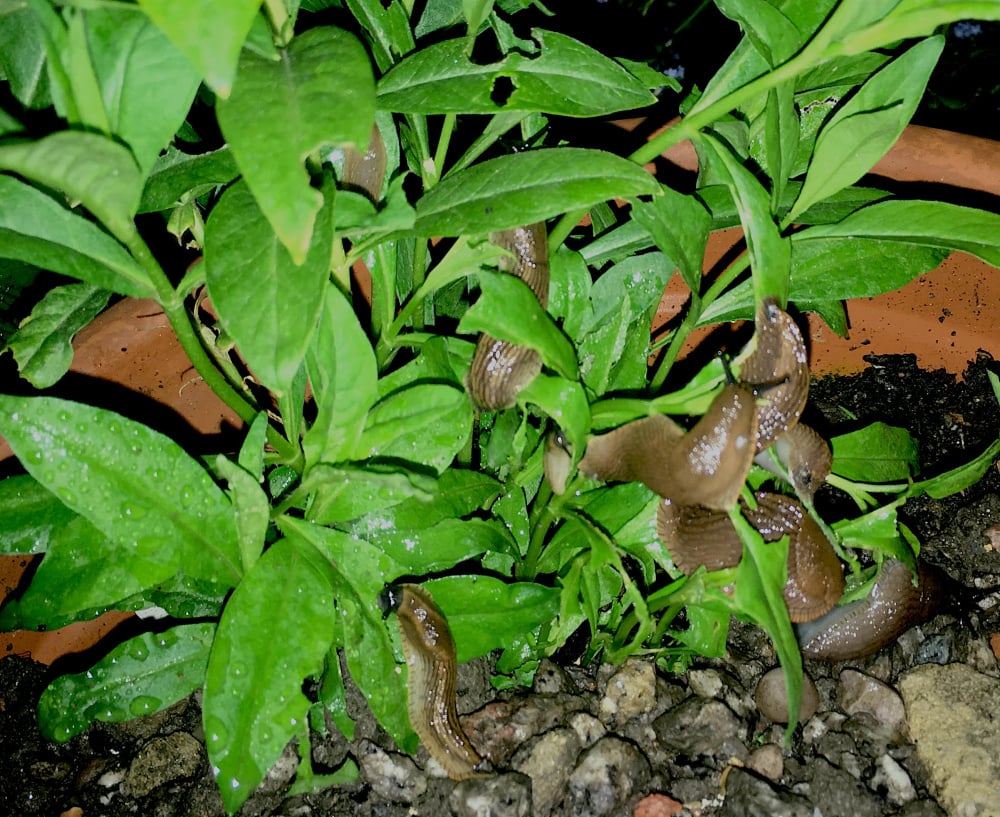 - -
The slugs seem to enjoy sheeps' fleece. They choose to huddle in dry coir, which is intriguing. 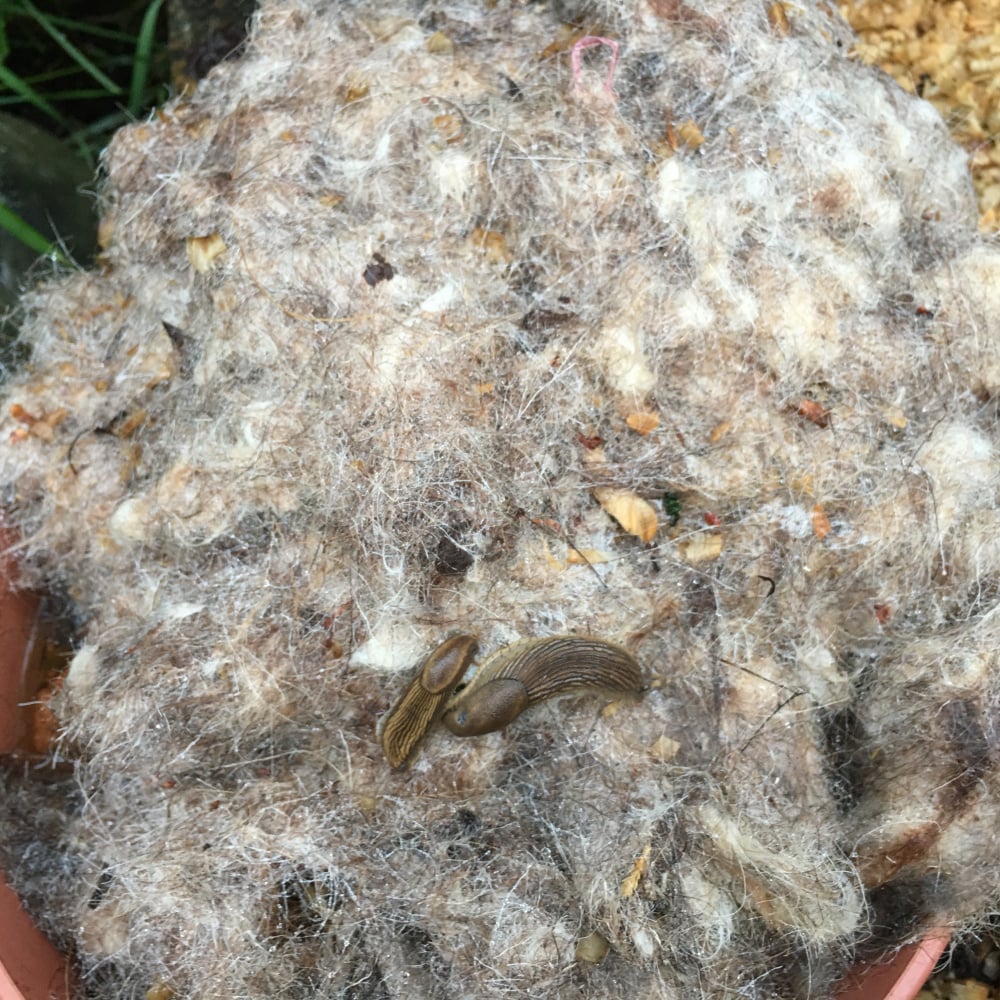 - - -
In 2019 and this July I have used the front garden raised bed as a nemtode test area. Observations are here. In summary, following the instructions as closely to the letter as possible, I found that it hasn't reduced the numbers at all in that area.
- -
The back garden is 7x3.5 metres. 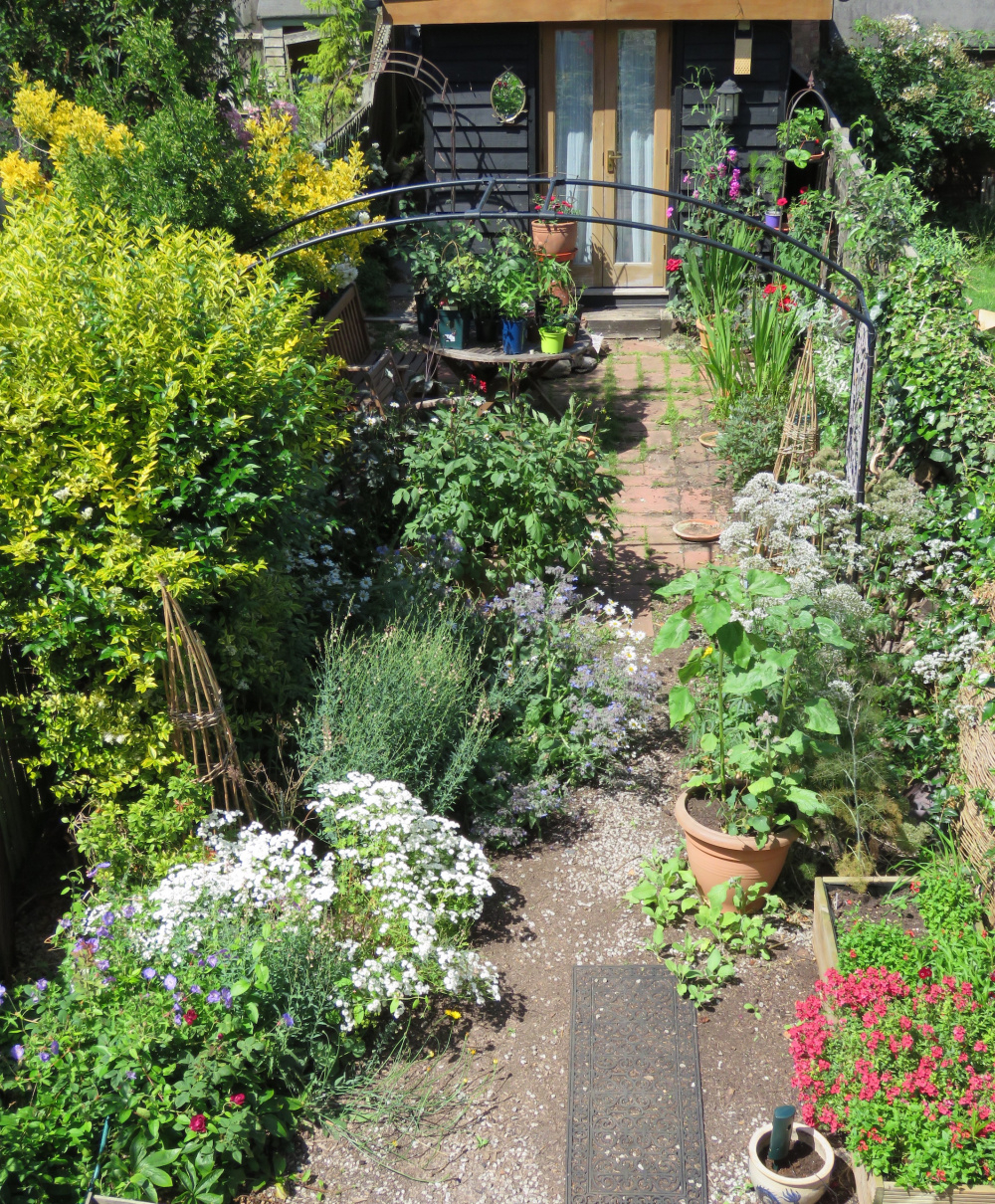 In the back garden (above) I have done ten slug hunts, since 1st July 2021, around every other night, with a torch, around 11pm for about ten minutes. I snipped the slugs. For the ten nights I counted these numbers of slugs:
52
32
33
42
36
75
56
38
55
32
- - -
I will go on to test beer traps, using different materials and sizes of containers for the beer, different beers at different heights from the ground. (Yes, I would rather drink the beer). From what I read, it is the smell of the yeast that attracts the slugs. As they can move quite happily under water, I'm not sure why they go on to drown, but some do.
These three, for example, were quite happy to sip beer and slither off. They didn't fall in and didn't drown. 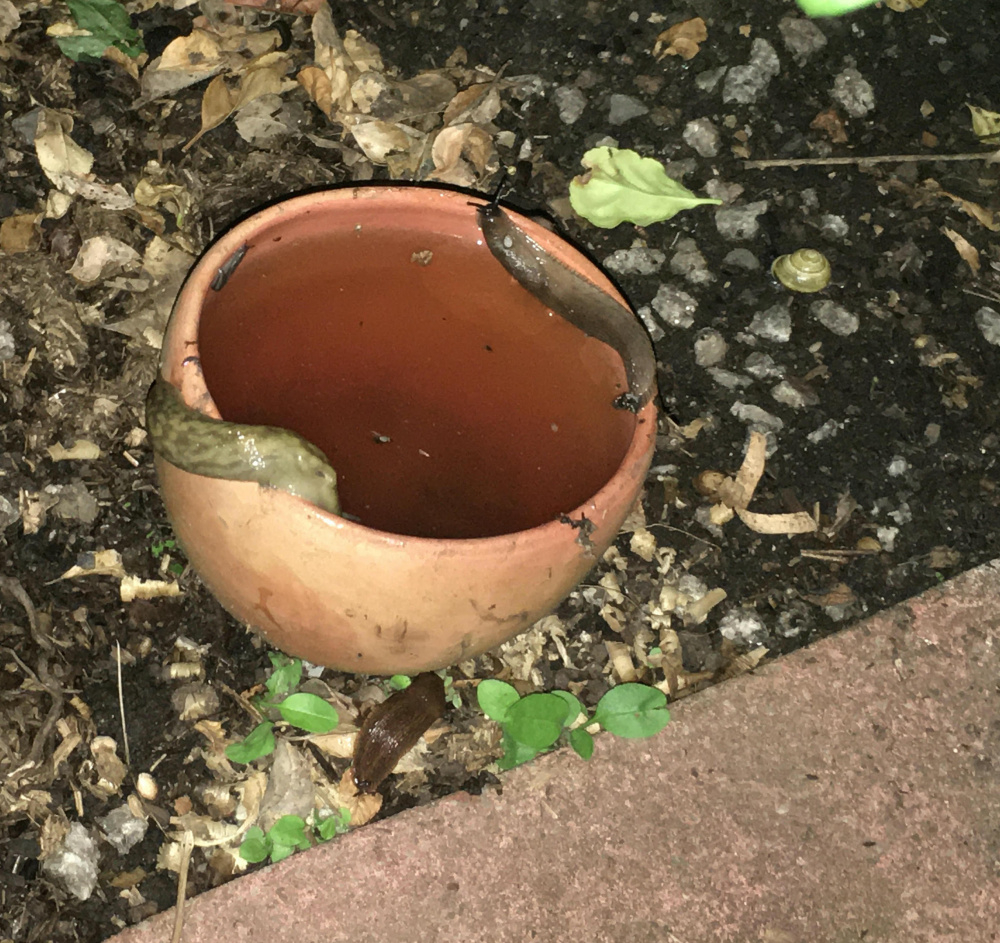 - - -
So - here are the beer trials. I put the five pubs in the seemingly most heavily slug-infested areas of the garden.
*
Plastic soup pot, one can of Boddingtons bitter, buried, not full. (The Golden Apple pub)

After four days. No slugs
- - -
About one metre away (The Red Rose pub)
Pint glass, one can of Boddingtons, buried, full.

After four days 16 drowned slugs (crusted, so, arguably, no more slugs would have fitted on the surface) 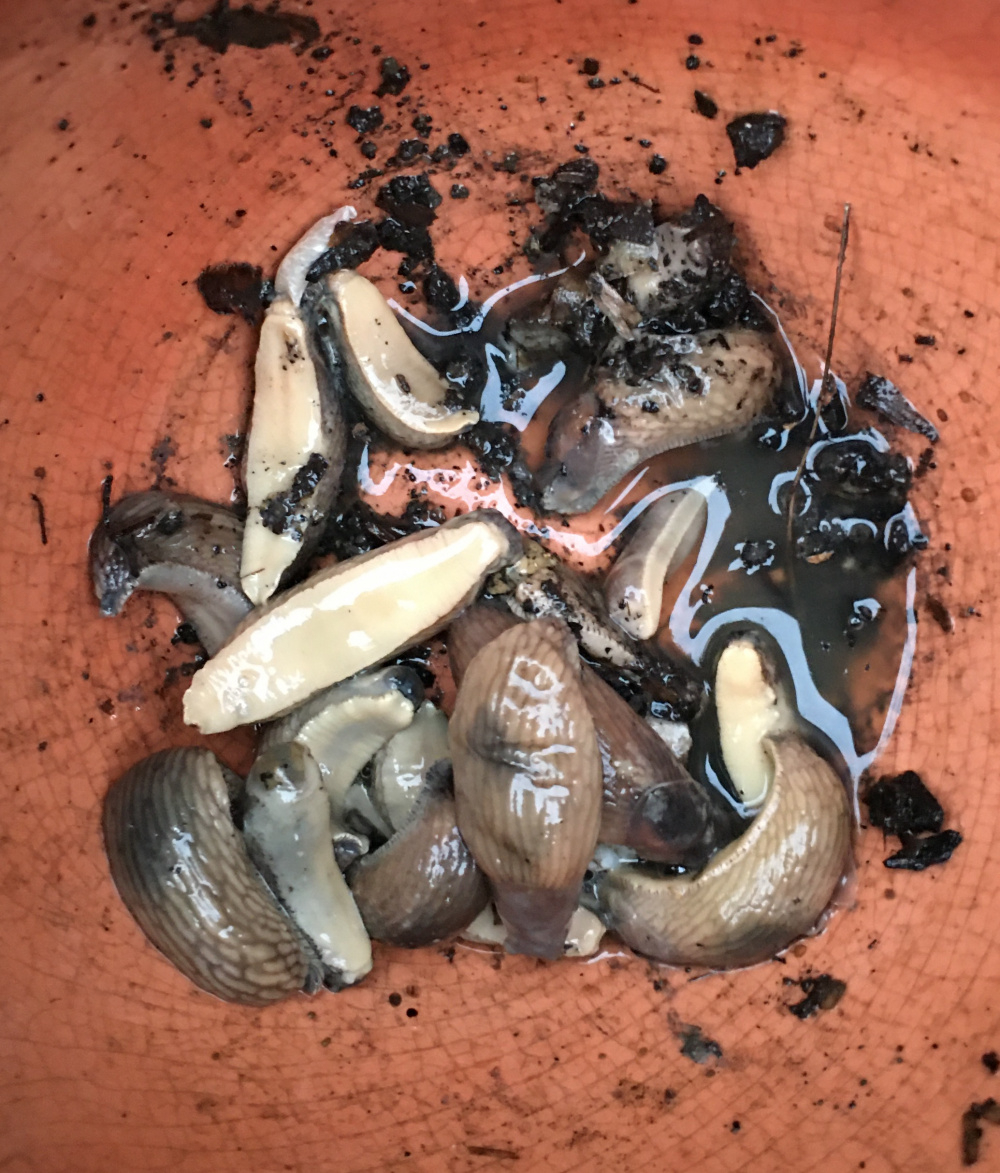 - - -
Glass bowl, two cans of Fosters lager, not full, not buried (The Pea and Poppy pub)

After four days: zero
- - -
Jam jar, less than one can of Boddingtons, buried full (The Fennel and Fork pub)

After four days 16 dead slugs (crusted, so, arguably no more slugs would have fitted on the surface) 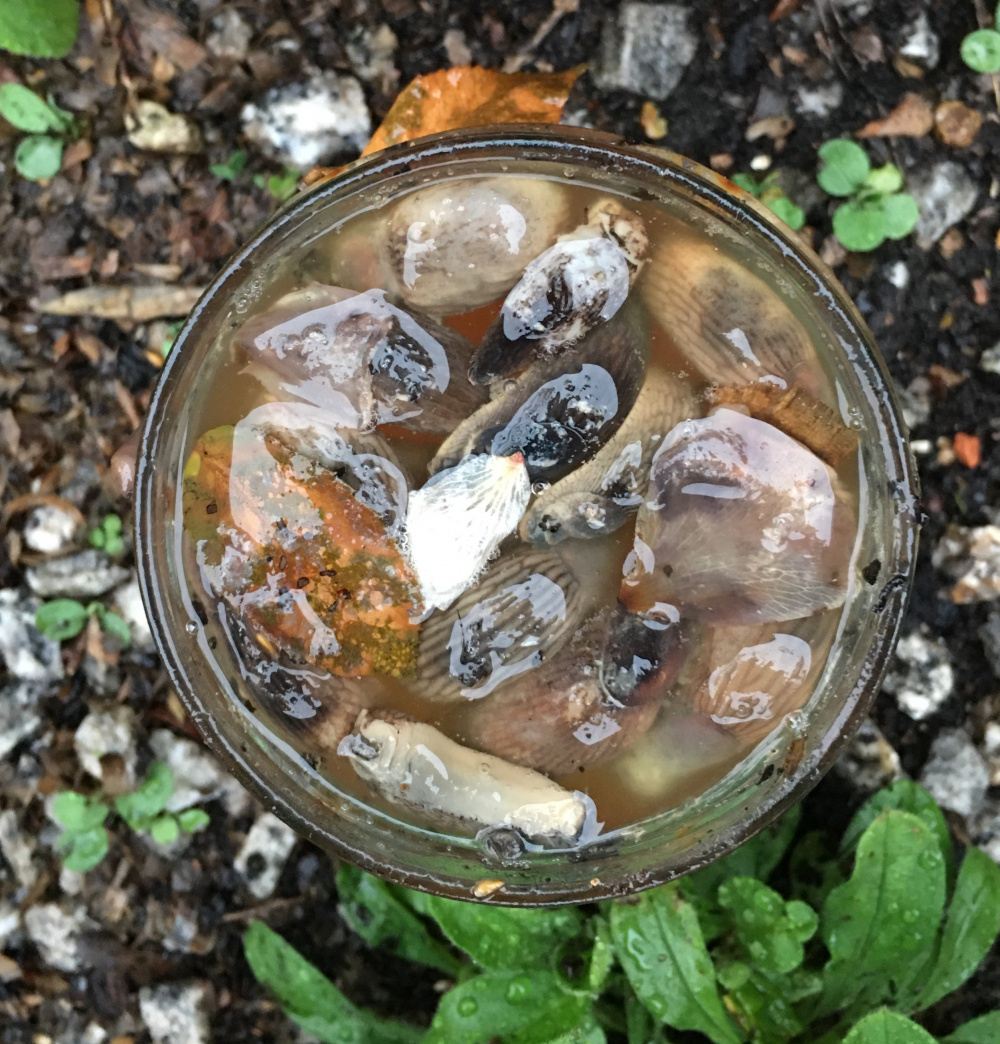 Plastic soup pot, one can of Fosters, not buried, not full (Hotel California)

After four days 13 dead slugs
- - - -
Plastic soup pot, one can of Fosters, buried, not full - in the worse area of all. (The Queen Virginia pub) 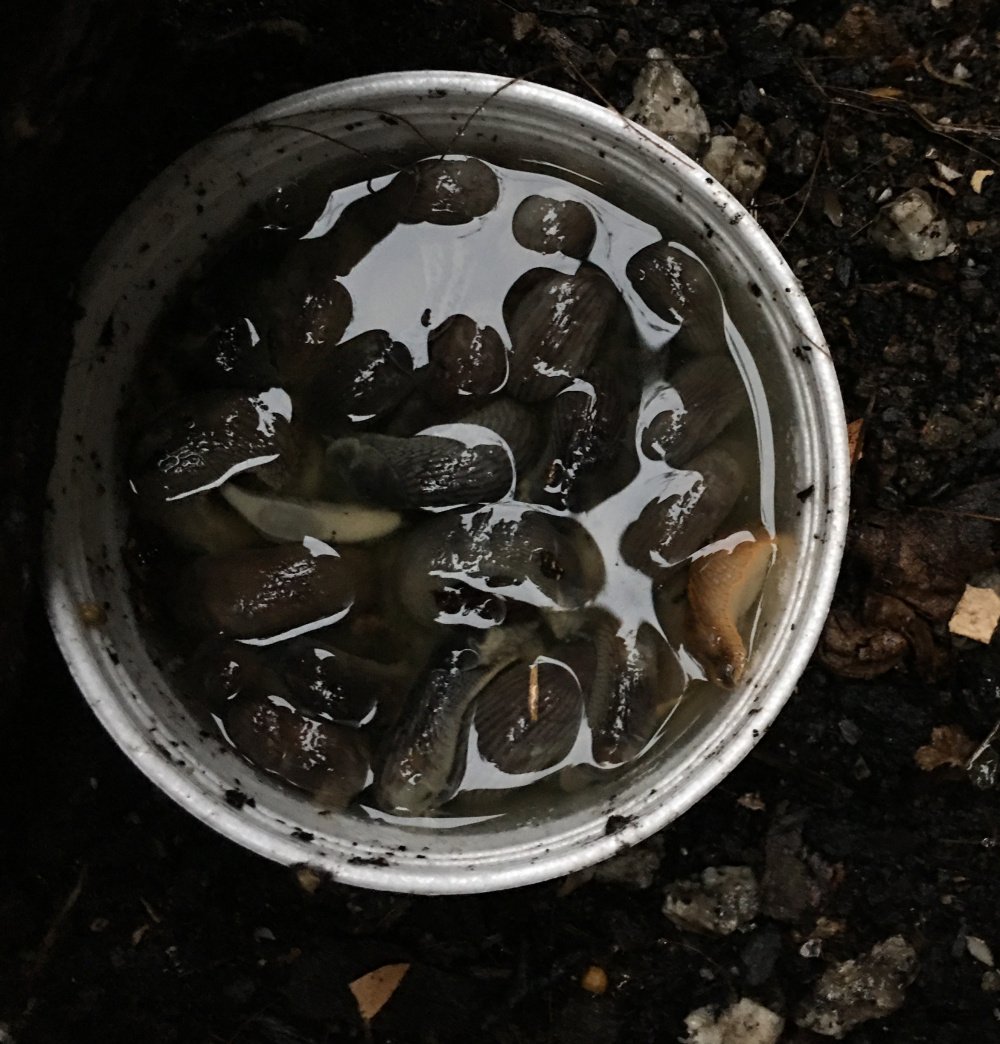 ======
So, what are the intial thoughts? The material doesn't seem to matter. Whether then pot is full, doesn't seem to matter. The placing matters a lot, although some of the worst areas (the Golden Apple), where I usually find most to snip - up to 30 at a time - had no slugs in the pub. Does burying the pot help? It's hard to say. Fosters v Boddingtons? I don't think it has made a difference.
- - -
Normally I would be snipping around 130 slugs a week at the back this year. The pubs caught 80 slugs on their own, in four days, with little effort from me, so that is a great result. I have tried pubs repeatedly in the past with little success (Special Brew in two sites through June). This might be because some of the areas that I imagined would be best to put a pub, actually had zero results in the test. Also, I wasn't snipping at all over the four day test and left the slugs to their own devices. Maybe there is more success if you let the beer brew in hot sun for a few days... But largely, if I was putting out one pub and getting 20 a week, this would be no where near enough to make it worth the effort. I caught so many slugs, largely because I had so many pubs in varied places.
A wider mouth would seem to be better as it doesn't crust over with slugs so fast - although the pot needs to be deep enough to drown in - so that means more beer... which is expensive.
Some slugs (as pictured) are happy to sip and run - so imagine a lot more slugs were attracted to the pubs but didn't drown.
- - -
So far I have picked the slugs out and left the beer in (partly because it's too expensive to keep buying new beer and the old stuff doesn't stink yet). I'll see how things are in another four days.
One interesting question is whether it all makes any difference. I snip 130 slugs a week or so in medium year like this and doesn't seem to make a difference to the population. In a bad year I would be catching into triple figures every night in the 4x7m area, seemingly without making a dent.