Tree Lilies - can’t take them out of overcrowded pot 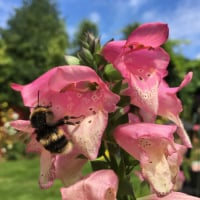 Big Blue Sky Posts: 663
April 2021 in Plants
This is the third year tree lilies that grow in a pot. There were only three of them and they were doing fine. But this year a million of small lilies appeared and the pot now seems really overcrowded so I started worrying that they won’t flower this year.
However I can’t take any of them out as the pot is kind of a round shape, so the top is more narrow than the middle.

And to make the matter worse, there is a young peony plant growing at the edge - last autumn it looked so dead so I just stuck it in the first available  pot as I didn’t expect it to survive. Well it did survive and actually already has the first flower bud.
What is the best thing to do with that overcrowded pot? I can’t be the only one this ever happened to, right? 😅
Surrey
0