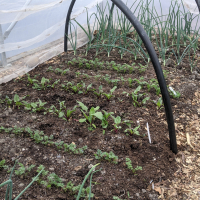 tomhumf Killamarsh, NE Derbyshire, UKPosts: 61
February 2021 in Garden design
We are newbie gardeners who have a largish veg plot at the end of the garden ( maybe 10m X 15m). When we moved we created some raised beds ( with plastic sides ) and weed membrane all around as the paths. It's basically plastic everywhere because we couldn't keep up with the weeding.

After following Charles Dowdings work we're interested in going no dig, and replacing the plastic paths with wood chips.

I got a truck load ( maybe 4 metre square ) of chippings dropped off today which I barrowed to the edge of plot in a pile against the back wall. I'm planning to remove the plastic weed membrane and spread the chips straight away on paths. The remaining stuff I hope to compost with. There is a lot of green in the chippings - about 50 / 50 I think. Not sure what tree / bush was, but it smells a bit like lime - flat leaves not conifer. I guess it will takes years to compost properly.

I've read different opinions on using green wood chips around paths. Some say it will take nitrogen from the veg beds, some seem to think it doesn't matter. In my case as there is lots of green mixed with the wood, do you think I'll be ok to use straight on paths?

I wouldn't use any of it direct on beds until it has composted well down..
0
«12»