What would you do with this area when spring comes around?

martinjpollardx2hllQmm Posts: 21
November 2020 in Garden design
I thought it would be easiest to do an annotated photo, so here goes...

General summary...
This is the south-facing fence at the back of my garden. The area was previously a bit of a wasteland; it has quite heavy clay soil, and was covered with weed fabric - so very little life. The back of the garden is dominated by the eucalyptus tree, which is 20m+ tall. There's a photinia shrub growing immediately in front of it, and these (along with the neighbour's trees/shrubs) somewhat overshadow the part with the light-coloured fence.

The pear tree has been there 3-4 years but hasn't grown much. It did better this year (producing a handful of fruit) after I severely cut back the photinia.

The small shrub to the left of the pear tree is a pretty shabby hydrangea. I'm not bothered about keeping it.

This year I have...
Repaired and painted part of the fence (the dark brown part); planted the Himalayan birch; installed a trellis and planted 2 clematis to climb up it. Today I've finished digging over the area, have dug in some manure and covered with bark for the winter.

What I'm like...
A gardener without much expertise or spare time! I'm thinking about tough shrubs, hardy perennials, easy ground cover and the like. Not really planning to spend lots of time planting out annual borders.


A bit of advance planning is always good, so your thoughts on what I might do with this area in spring would be very welcome! Many thanks. 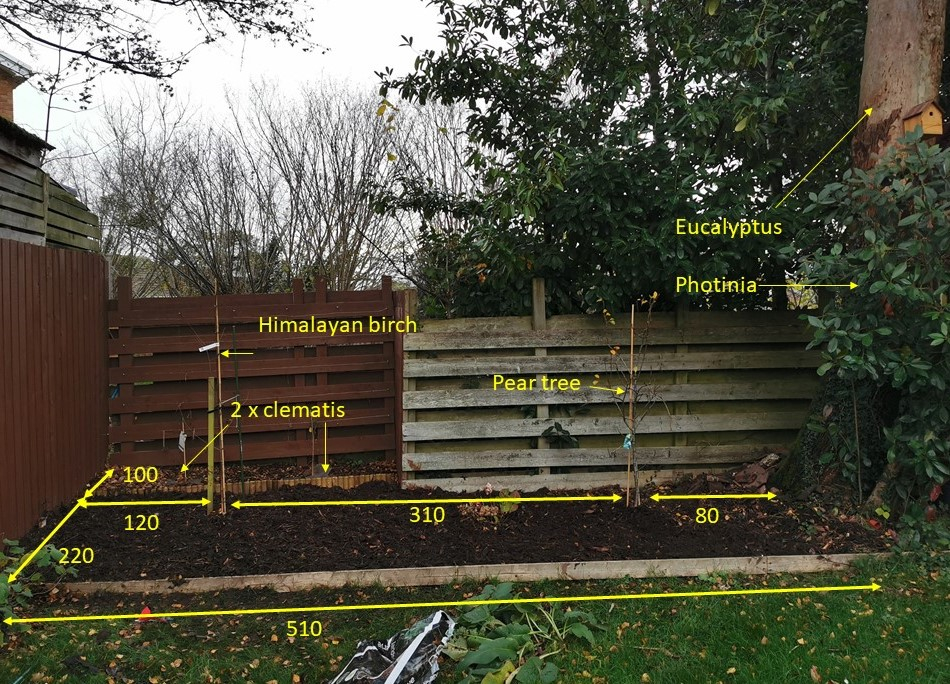