Request for help identifying an infection/disease

I'd be grateful for some help in identifying something that seems to be killing my entire garden. I've tried a range of measures and it continues to kill everything, including the grass.

I live in terraced housing and some of my neighbours take real pride in their gardens. Fortunately it hasn't obviously spread to theirs yet, but it would be awful if I wasn't able to get this under control and I was responsible for destroying everybody's gardens.

I sent a number of images to a professional gardener a while back. He diagnosed it as a bad case of powdery mildew, but I suspect this is a misdiagnosis. I live near some public marshes, and I can see A LOT of powdery mildew there, but what's on my plants doesn't look much like it.

I've treated the garden for powdery mildew using the ecofective Bug and Mildew treatment but it's been windy and raining pretty persistently ever since. I can see that it's still spreading, however.

There could be more than one issue at play here, but it seems to have killed the following:
Please note I'm listing all the plants that have shown some comparable symptoms, rather than things that I know died because of my negligence (this is my second year of having access to a garden, so there were a few).

I'm going to describe the issue chronologically and keep it as short as possible. I apologise in advance for the mini-essay.

1. I spent considerable time sieving the soil in Spring. As I had moved into a rented property in London last year, I wasn't confident in the quality of the soil and was sick of finding things like sharp glass in it. I covered it in a layer of compost bought from the shop. This may not be relevant, but my partner thinks I might have uncovered some dormant pathogen during this sieving process.

2. By late Spring, something had taken hold among the weeds at the back of the garden (a dense thicket of green alkanet and comfrey). Initially it looked like whitefly and the honeydew they produce. Leaves became sticky, and then yellow, then brown and dry. It looked dusty, but not like photos of powdery mildew (I assumed this dust was dead whitefly - see image below for white specks). I didn't pay all that much attention to it at the time because I thought it was limited to the weeds at the back of my long narrow garden. 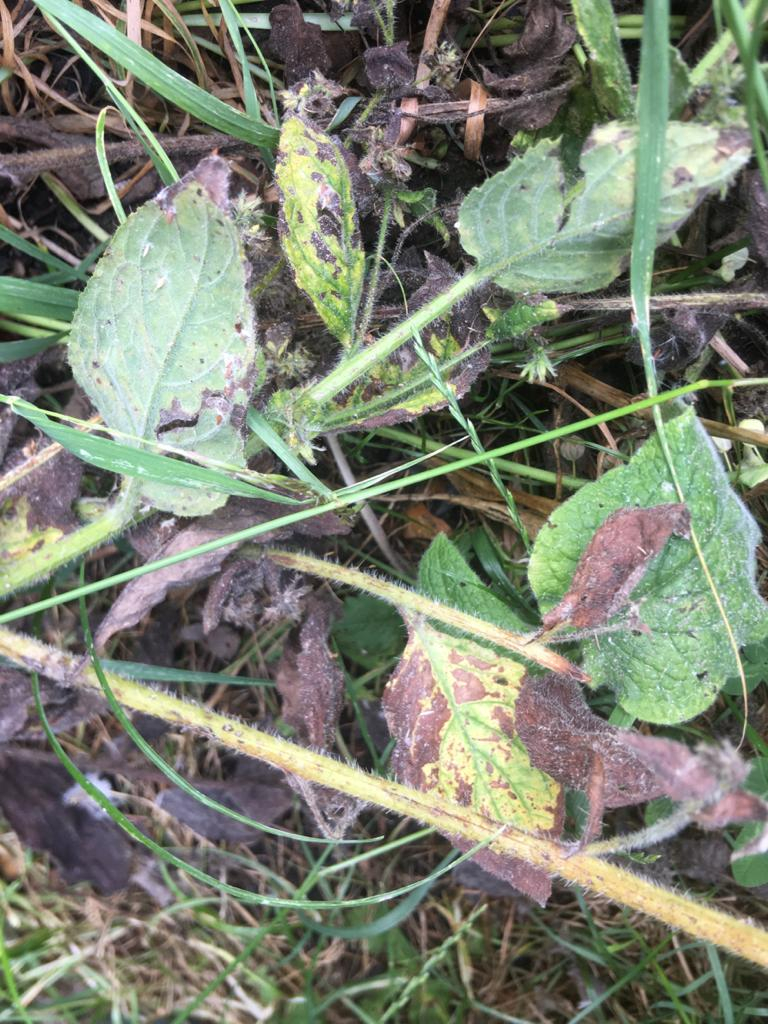 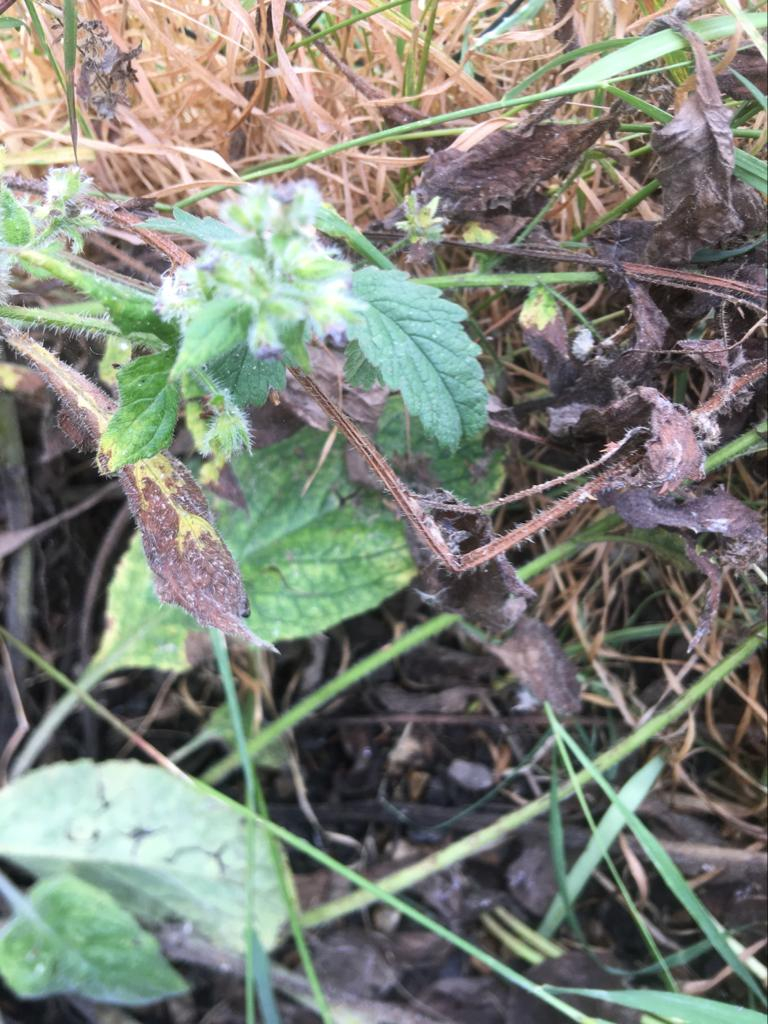 3. My peas, towards the back of the garden suffered what looked like pea/bean blight. The leaves turned yellow and then a purply red. The stems looked like they were drying up, which was stopping water from getting to the rest of the pea plants, and very robust-looking broad bean plants turned black almost as soon as I planted them in the ground. Before long all my peas and beans died. 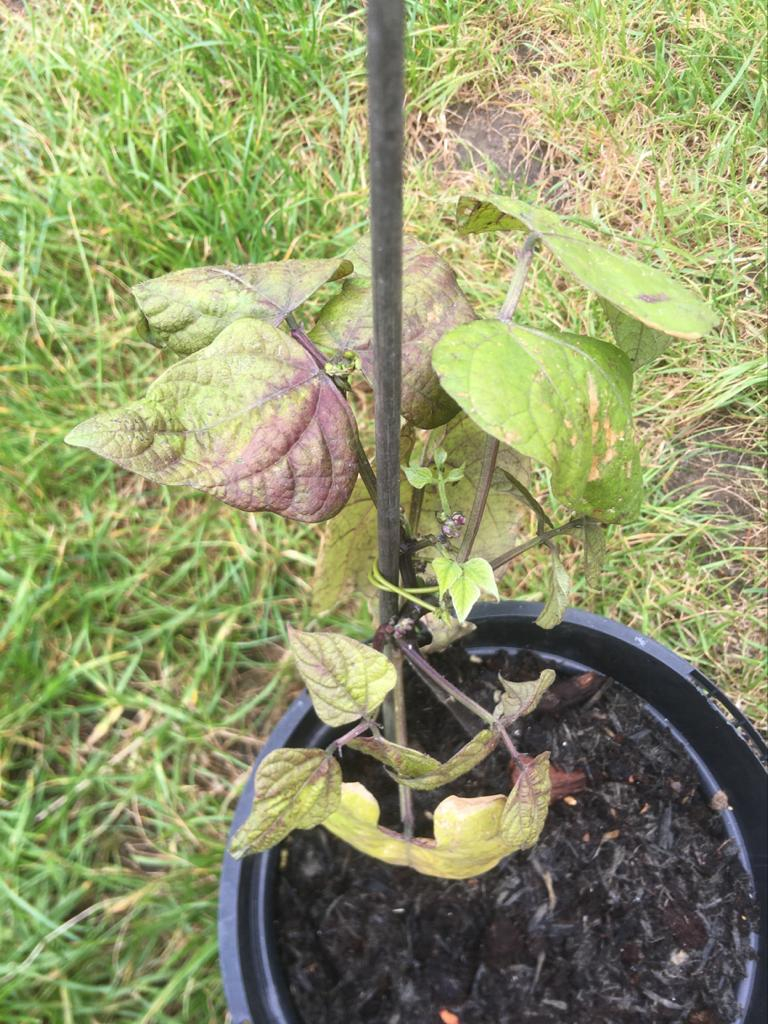 Above: my last purple French bean, which I'd returned to a pot in the hope I could salvage it. I'm not sure if you can see from the image, but the brown patches on the leaves had a red/purple hue, making the plant look angry. I saw this in a number of other plants that became contaminated, especially the rocket, which was very red-orange.

4. I tried to dispose of the contaminated leaves at the back as per the RHS website guidance for anything contaminated. In the process of pulling them up, I think I managed to spread the issue further down the garden.

5. Plants in the beds at the side and front of the garden showed signs of contamination. What I'd thought was the indestructible lemon balm that I planted last year and had virtually taken over a whole bed died in the space of about two days. I moved everything into pots, in case it was the soil.

Things continued to die so I consulted a professional gardener and shared these images... 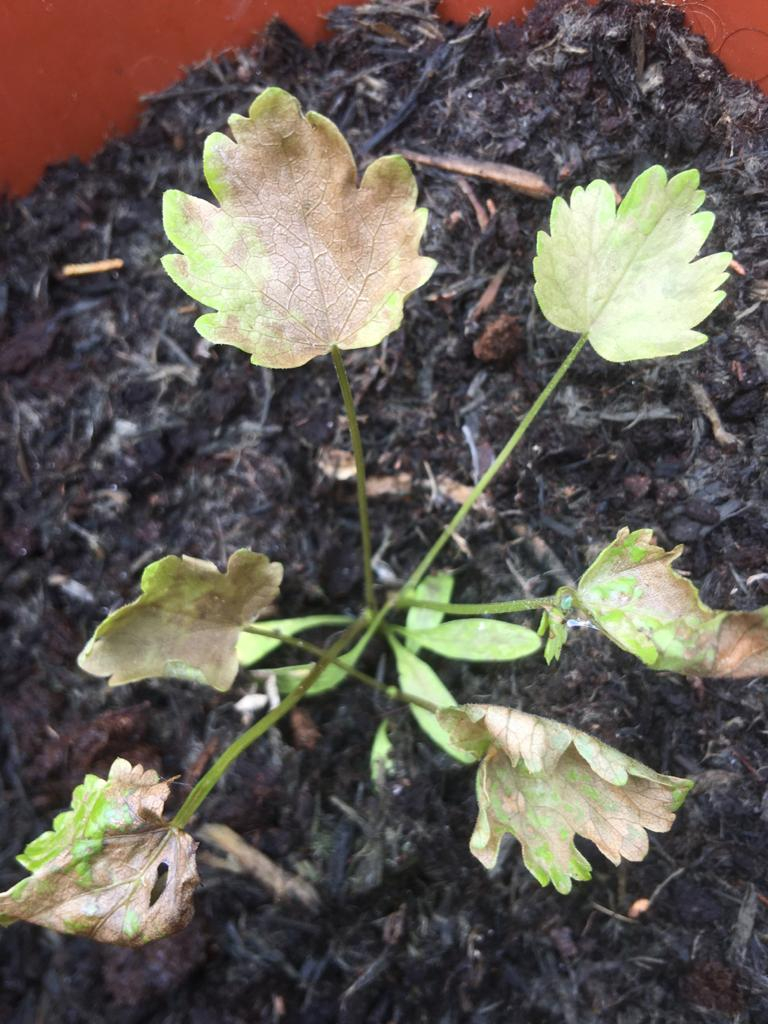 Above: My woe-begotten parsnip. Hard to see from the picture, but this brown was an orangey colour. I thought perhaps it was rust. 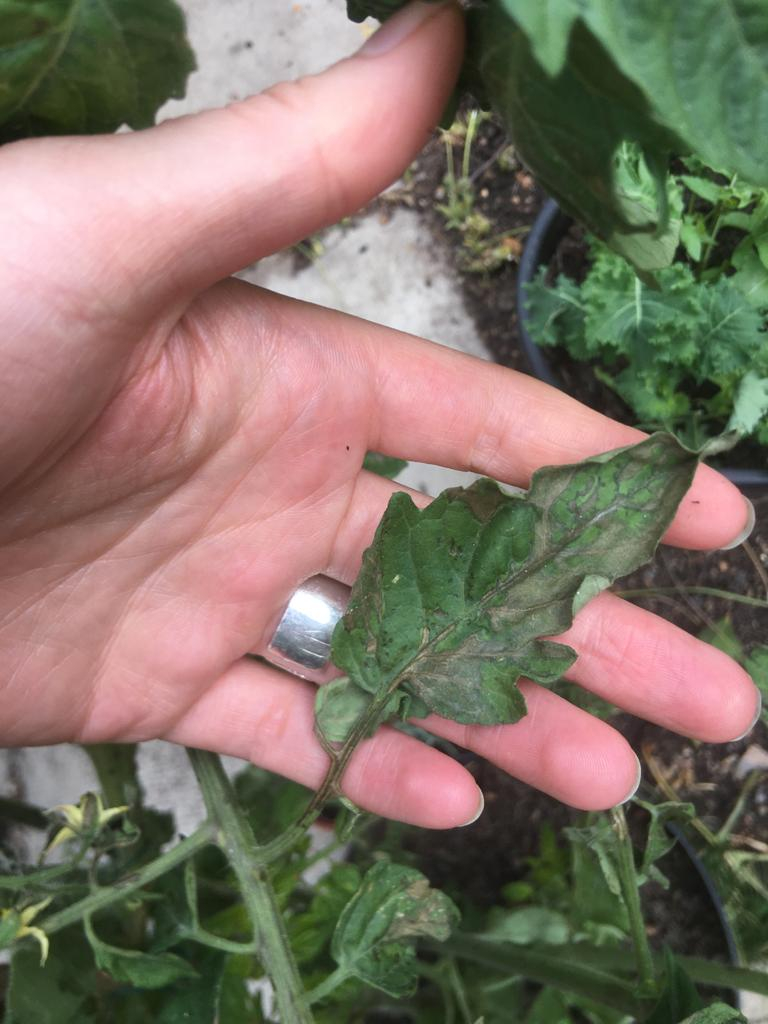 Above: A neighbour gave me a big tomato plant after seeing what bad luck I was having. It very quickly turned brown and floppy. 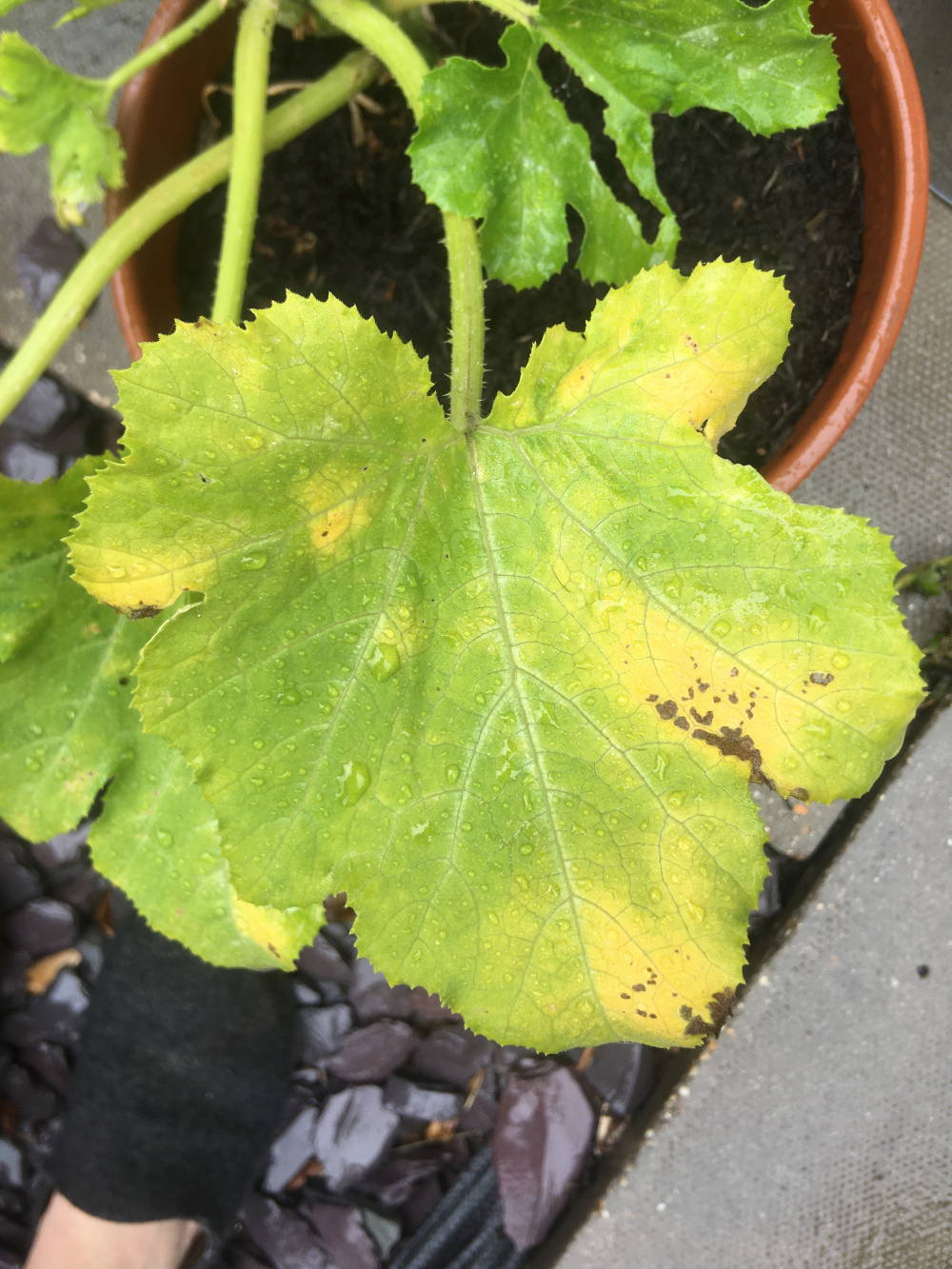 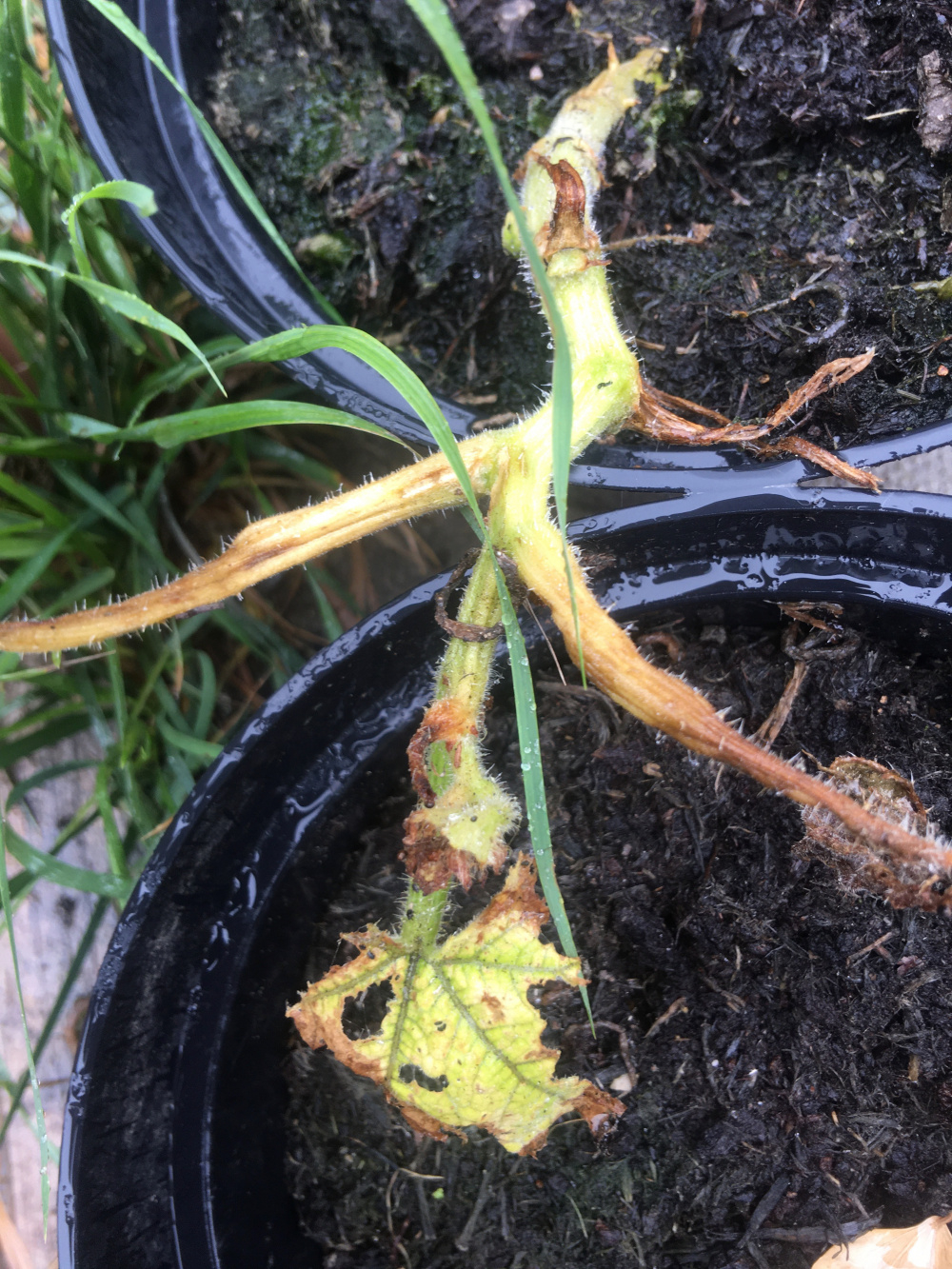 Above: two courgettes that weren't meant to be. They also had some help from the rampant north London snails. You can see with the second image how the stems seem dried up and constricted from taking up water. This was a common sight, especially in the peas and lemon balm. 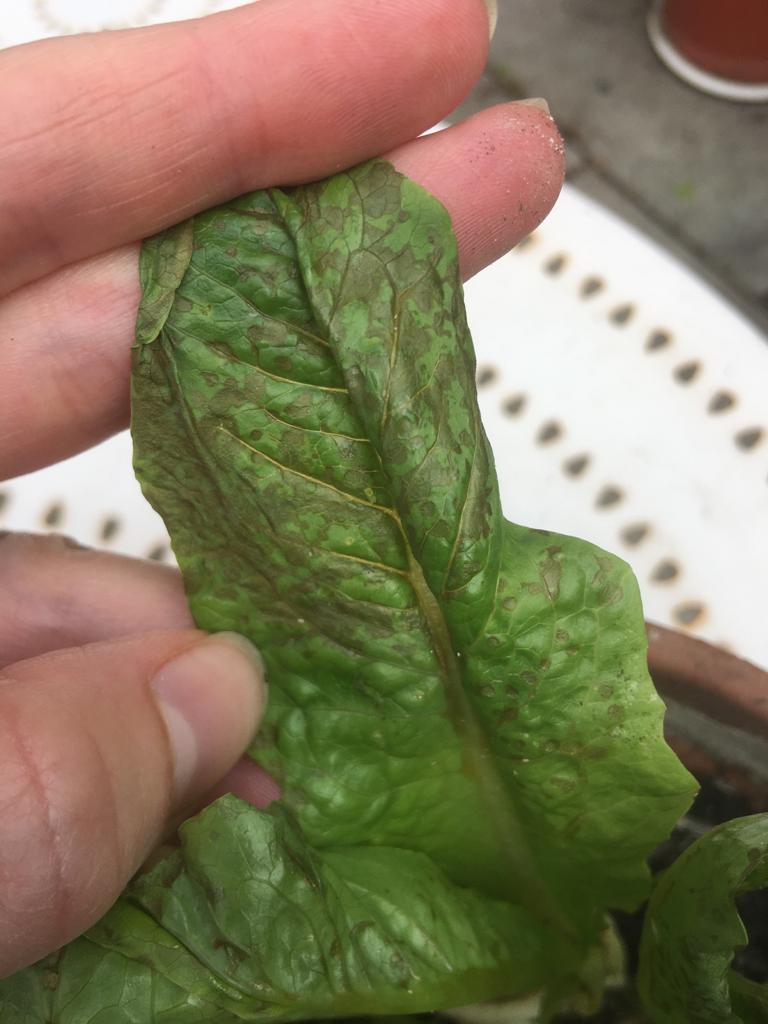 Above: Lettuce osterley that all turned brown and floppy 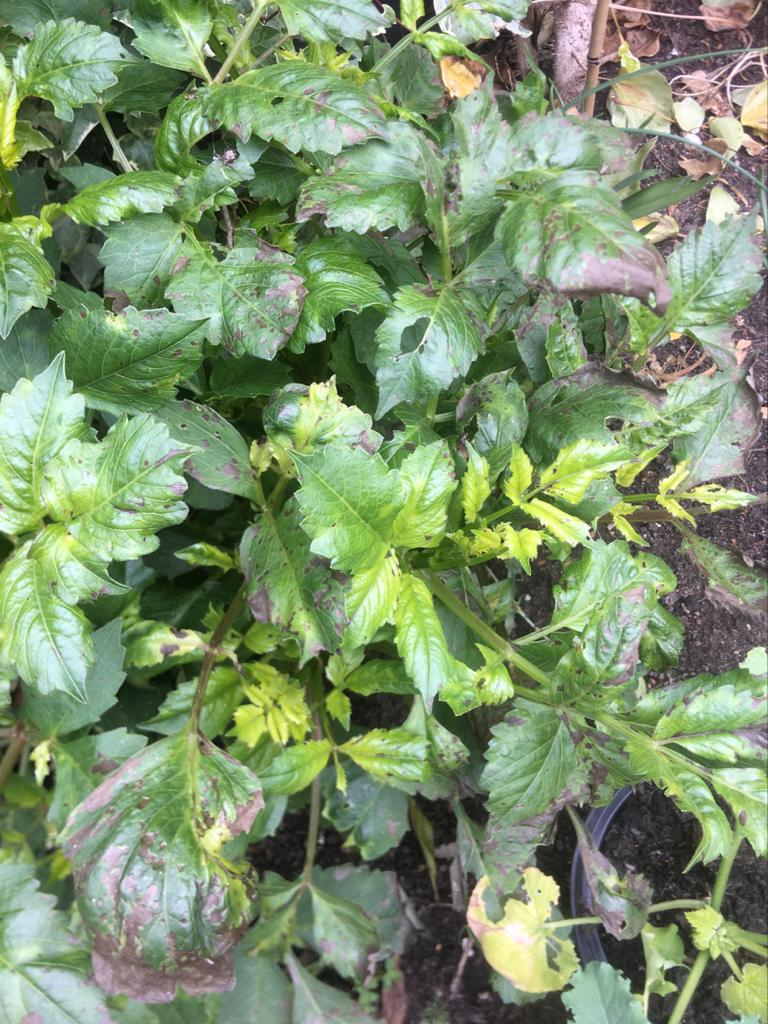 Above: The prodigious dahlia from last year turned black. I cut off diseased leaves and eventually disposed of the whole plant as I saw stems turning black. 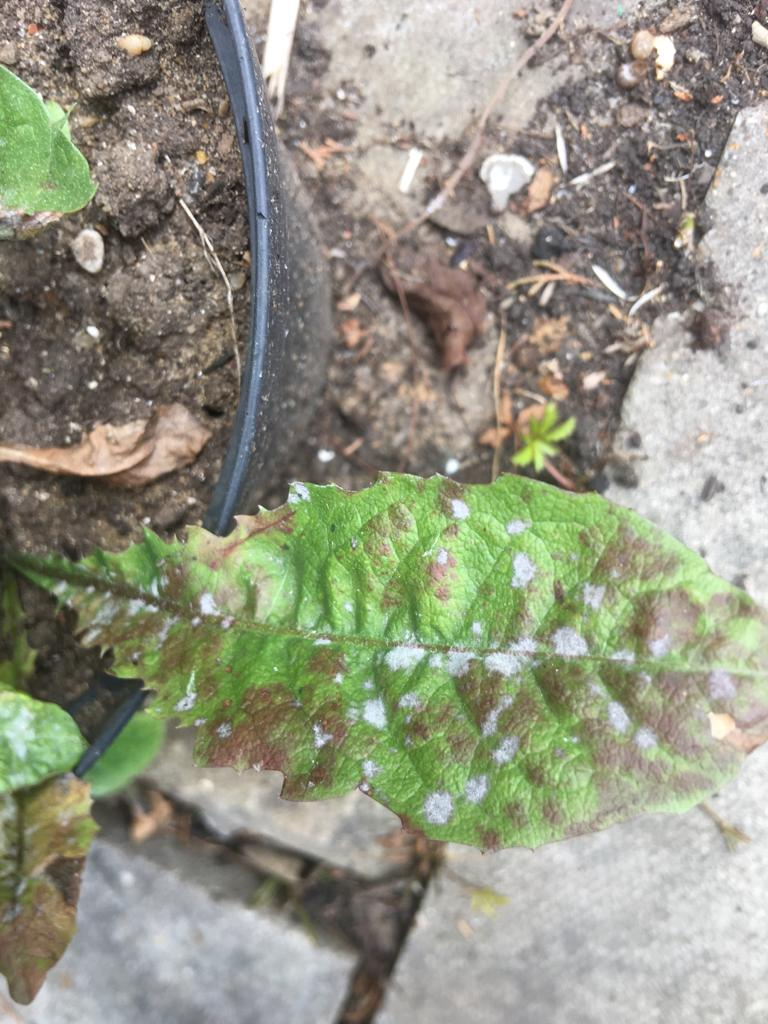 Above: A dandelion that had invaded a pot. It also turned a reddish colour. This is the only plant that was exhibiting obvious signs of powdery mildew, and this is why I think the diagnosis of powdery mildew was reached.

6. After this, I disposed of virtually everything in the garden, including plants in pots, but in a few cases I cut back all the infected parts I could see on some plants that still looked healthy.

I've pretty much given up on the tragic garden and have a few things growing indoors. Today I noticed my remaining hanging basket strawberry is showing the symptoms, and it has been spreading fast in the the ivy that covers the fence. 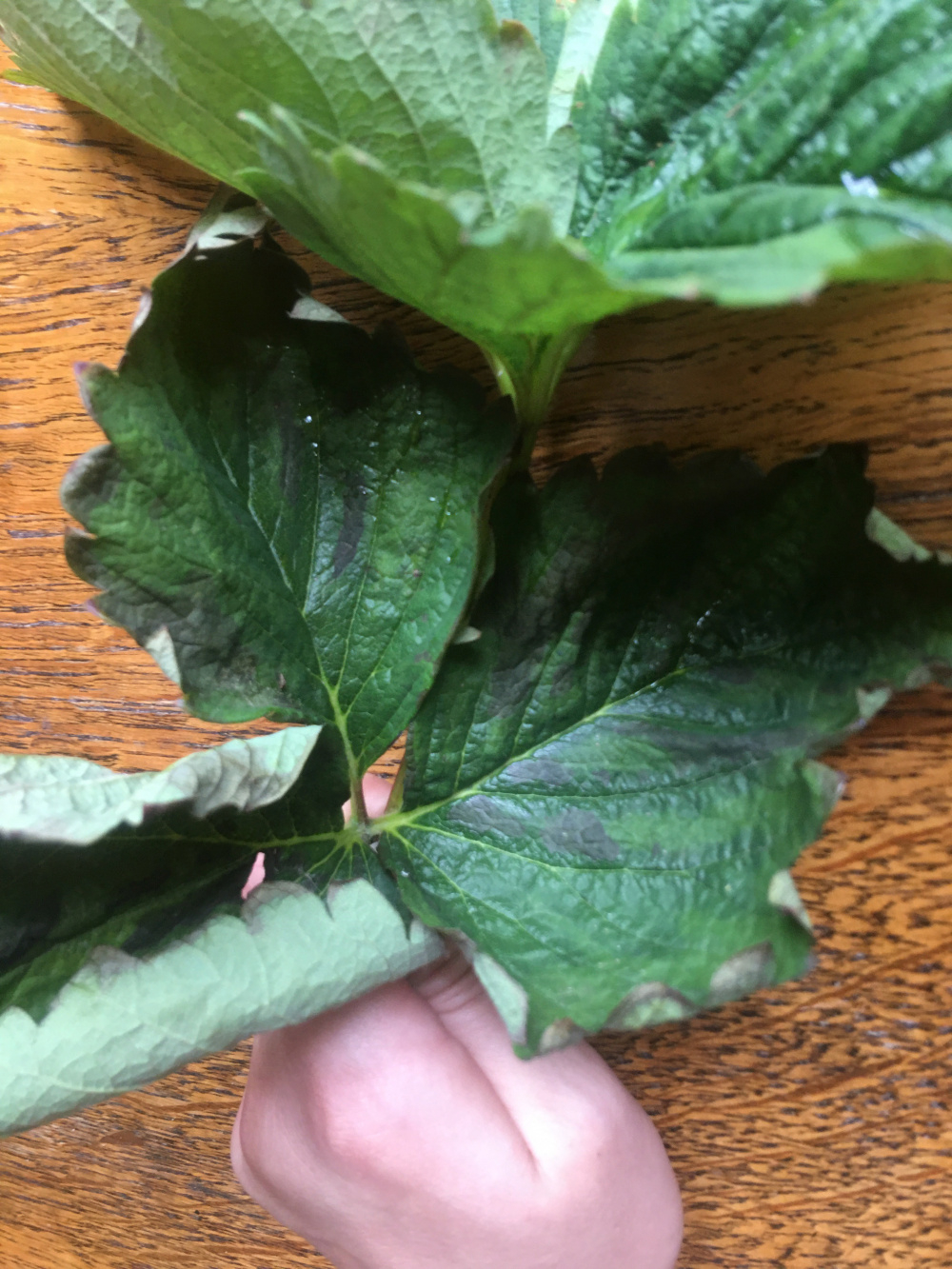 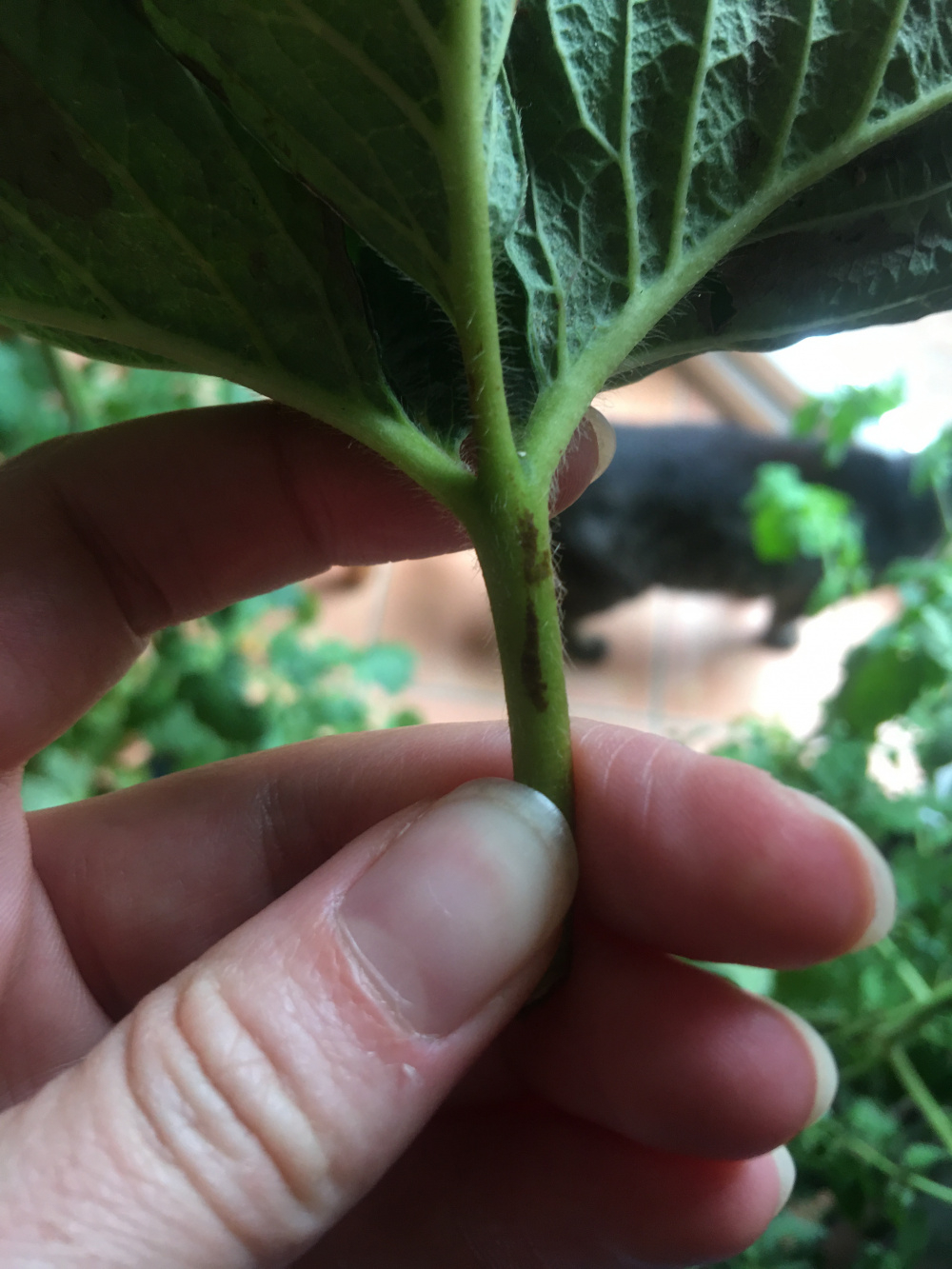 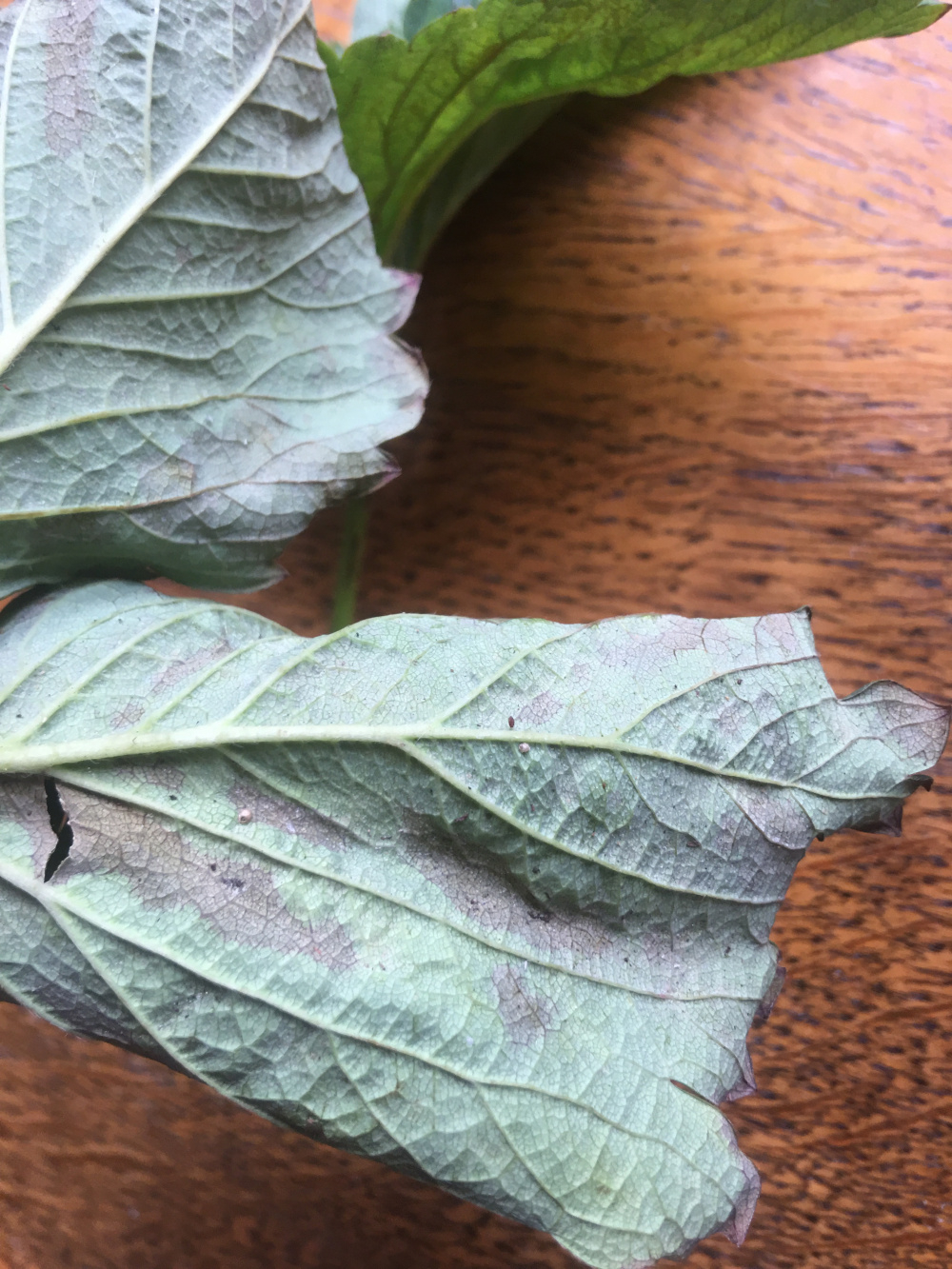 Above: strawberry leaves and stem arejust starting to show the signs. 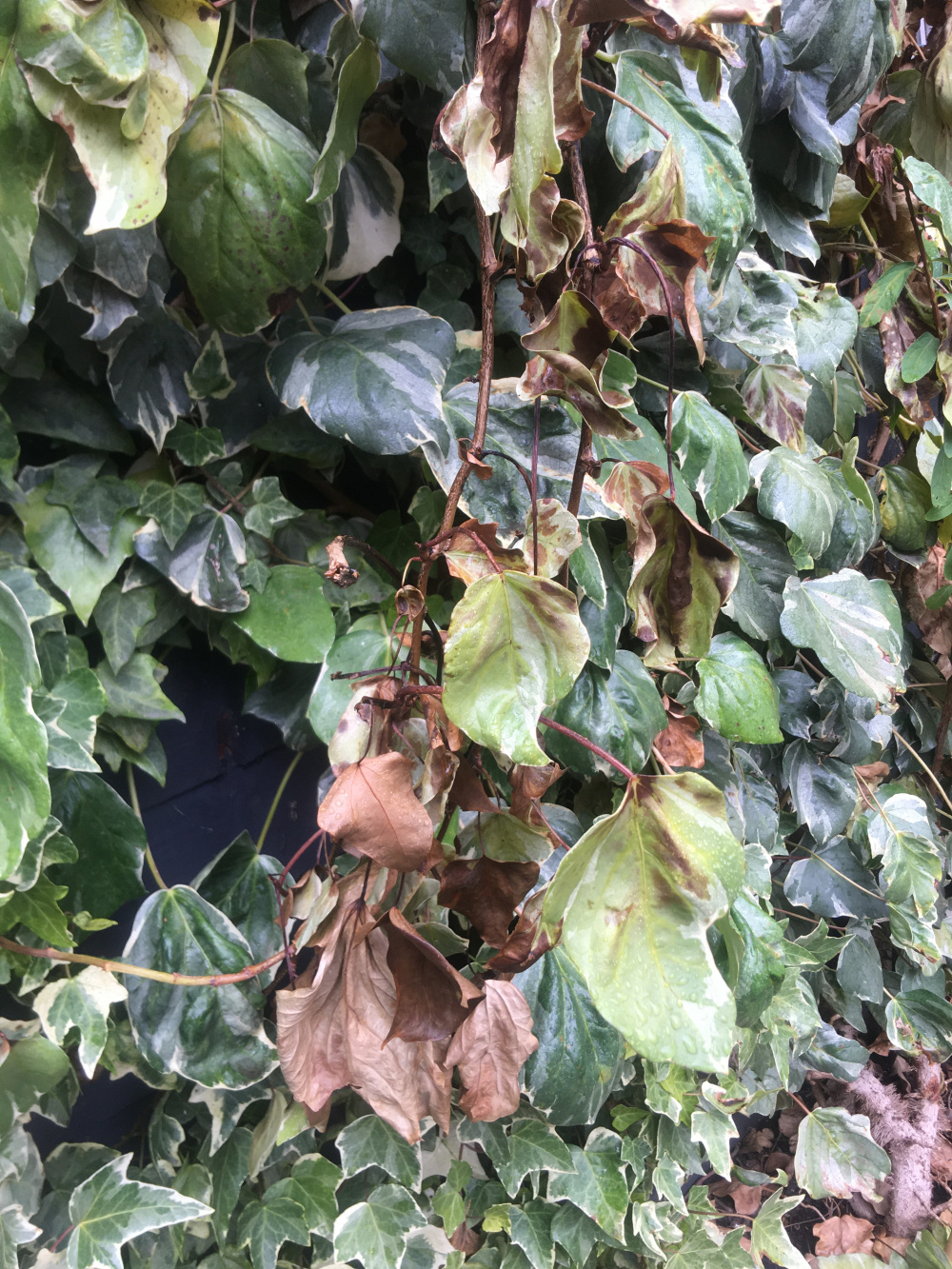 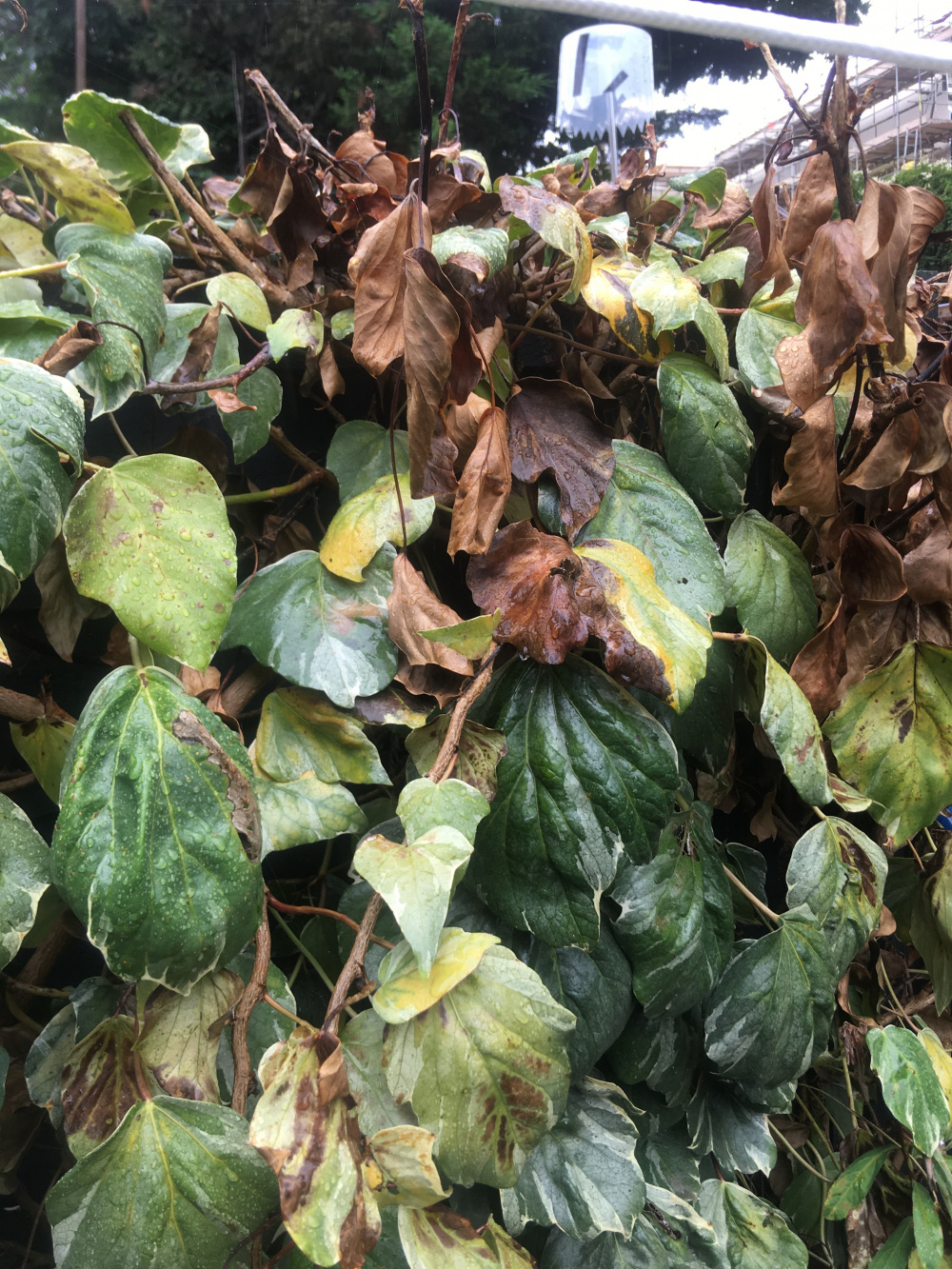 Sorry this is such a long post. As you may be able to tell, I'm slightly desperate! I put LOADS of work into the garden at the start of the year and invested quite a bit of my money given that it's a rented property. Now it's heartbreaking just venturing out to the garden. I'm also anxious that my landlord is going to ask for some answers about the state of the garden at some point.

For the record, there are a few things that seem unaffected. It could be that they haven't been reached by the pathogen, or that they're immune:

Thank you for reading. Any insights would be SO gratefully received.