stueymcgill Posts: 3
April 2020 in Problem solving
I had two new lawns laid last year by a professional gardening team - the back (in July) and the front (in October). The back is doing fine but the front is looking very tired now.
It was laid in a single day. After removing the existing lawn and adding another 3 inches of topsoil, just at the moment of laying the turf heavy rain started and continued for the rest of the day. They ended up moulding the topsoil by hand to form a flat surface (it was like watching potters at work). I asked if this was going to damage the soil but he assured me they'd done this before and that it wouldn't affect the outcome.
Fair enough they got a good finish and the lawn grew (very!) well through the winter and early spring (during which time it hardly stopped raining).
For the first cut in mid-March I borrowed a petrol mower and cut it on the highest setting, and then the next week (and each week since) I cut it again on the highest setting on my own mower (30mm). Since then we have had a dry spell and in that time the front lawn has really begun (and continues) to deteriorate - despite getting 2 hours from a sprinkler (approx. 20mm) each weekend. The grass is thin and a tired brown predominates: 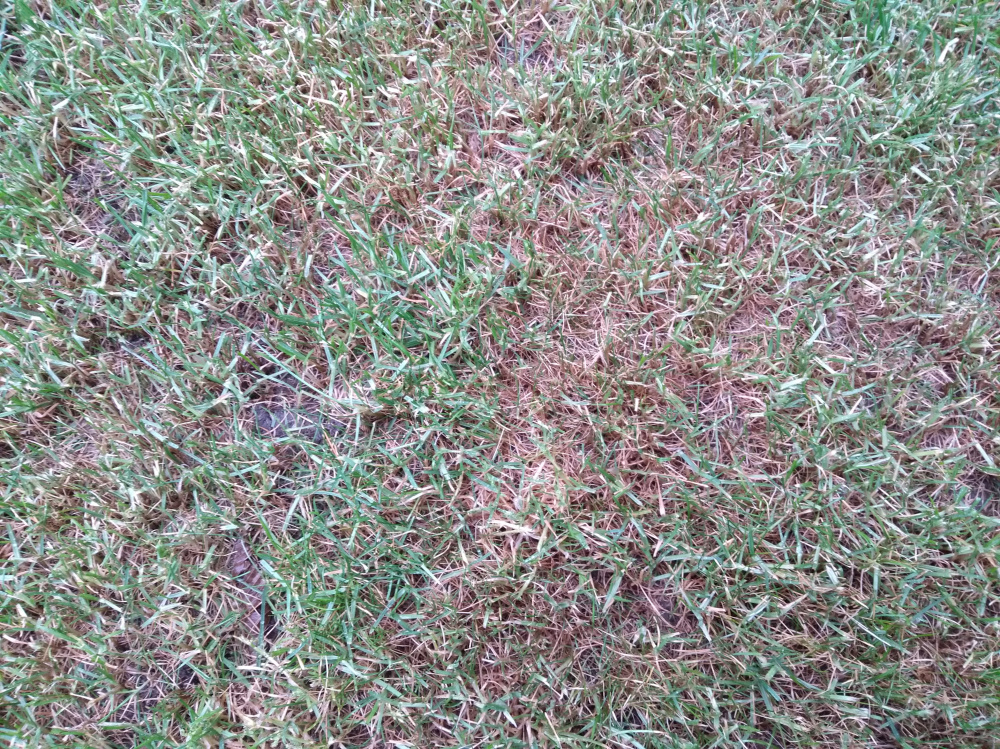 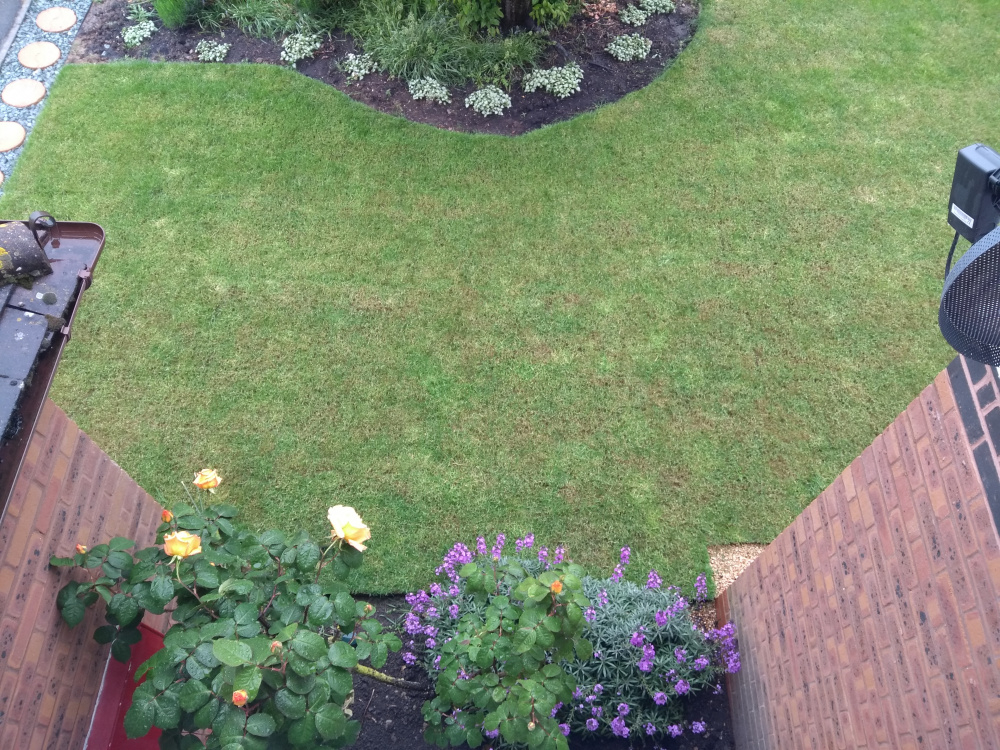 In comparison the back is doing very well, despite getting exactly the same care: 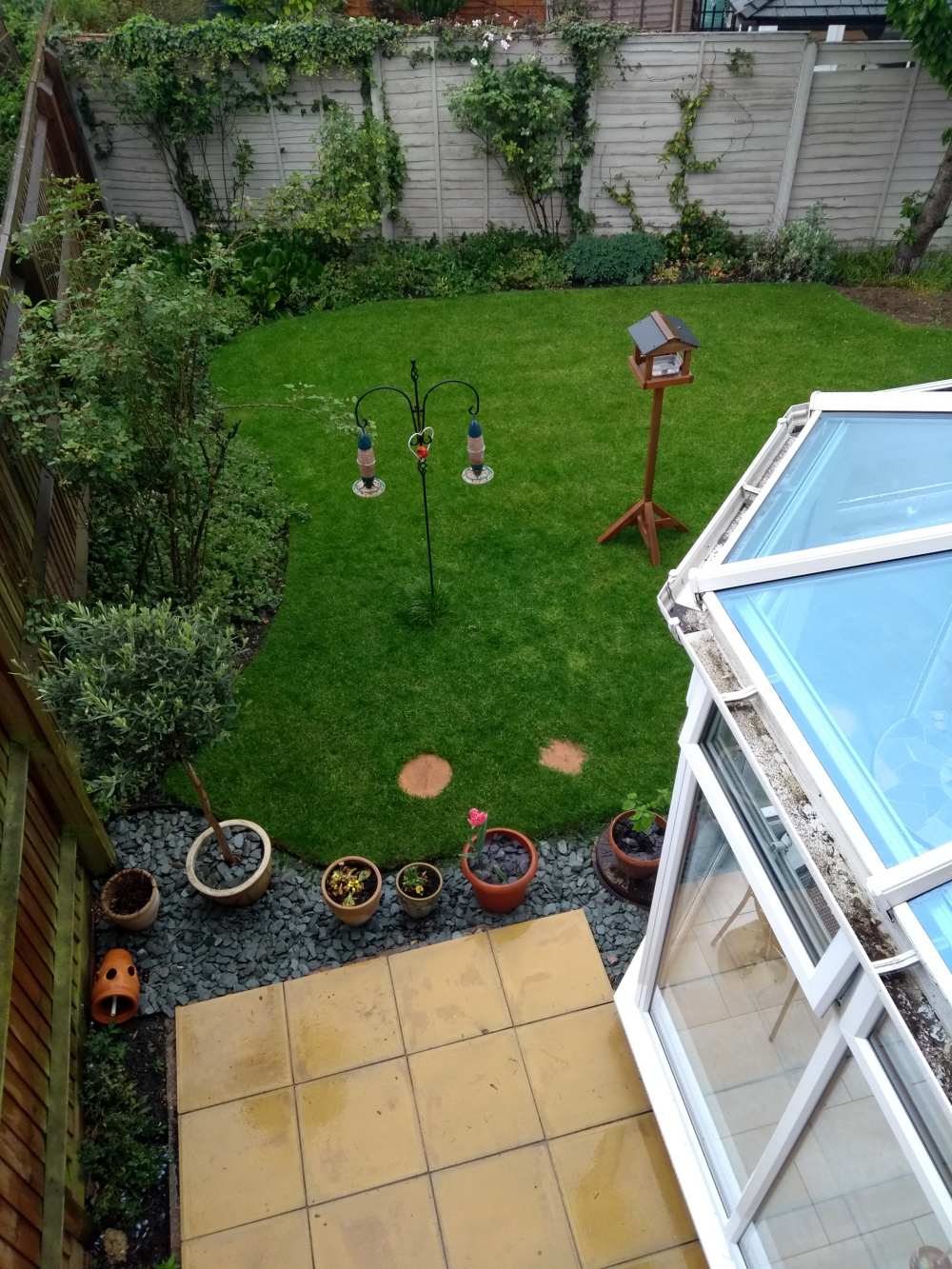 After a few days without watering, the front ground becomes really hard (screwdriver test), certainly harder than the back garden. This suggests to me that the ground has become compacted due to the conditions in which it was laid (it gets virtually no traffic).
I sent these photos to the gardener (they are based about 30 miles away) - and he sent back some advice for fixing it myself (remove thatch with a rake and reseed, and mow higher), but said nothing to suggest that this was in any way unexpected.
I've got three questions:
1) Is this very unexpected? Have I just been unlucky, and this could have happened even with a lawn laid in the best of conditions? I am really surprised to see this after < 6 months.
2) Is it more likely the result of how the lawn was laid, or how I've been cutting the lawn?
3) If it is compaction, how feasible is to recover the lawn (e.g. by aerating)?
Thank you gardeners for any advice!
0