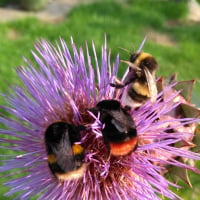 Zen Dog Posts: 51
April 2020 in Problem solving
Hi all. I have two problems every year. Black spot or rust on the roses and something similar on russett tree. Never had it on either before moving them to current home. There were old hollyhocks here covered in rust which I hoicked out but wonder if the roses and young apple tree I brought with me were infected somehow. I've read that there can be a connection between apple and rose diseases but can't remember much now.  Either way I have been using sulphur Sulphur rose and trying to clear fallen leaves for 5 years and still have some damage every year. I was about to order more sulphur rose but saw the company also sell "garlic wonder" and "wondered" if anyone had used either and to what end. They advertise the garlic wonder as also boosting growth etc on all plants just by spraying. Is that even possible? Any/all advice and opinions would be greatly welcomed.
0