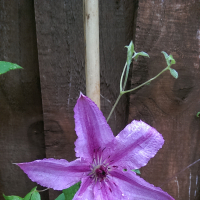 kasjk Posts: 137
April 2020 in Plants
Hi all, I planted some tulips last autumn because I bought a load from Wilkos (they were so cheap, couldn't resist) and had to just plant them anywhere I could fit them in the garden. At the moment they are coming up but it's only about 10cm-ish leaves showing. I know ideally I should move them once they've died down but would it cause any issues if I did it now?
0