How do I correctly Prune 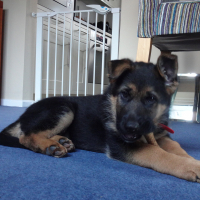 I have a David Austin Gentle Hermione & a Claire Austin standard rose.  I have tried various ways of pruning it without much success.  The first year I tried pruning hard, which was pretty much how I received the roses.  The result was a rather leggy bush with no new growth appearing from the grafted part of the rose.

The second year I tried just reducing the branches by 1/3 but this also produced an even leggier appearance & again no new growth from the grafted part of the rose.

Could anybody offer me any advice, I would be very grateful.