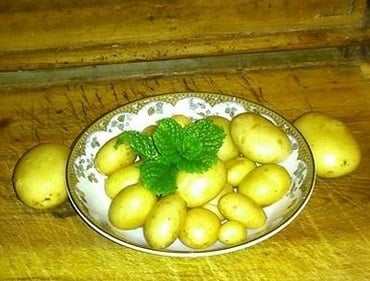 Capelglyn Posts: 24
August 2019 in Garden design
I wanted to share this brilliant find with you all. Last year, after some research, I bought some green debris scaffold netting from Ebay. For less than £25 i received a roll 2m x 50m. At first I was a bit sceptical, but a year on, I am absolutely sold on this product, let me explain. We had planted a willow hedge along the boundary with the adjoining farmers field and his Welsh Mountain Sheep enjoyed sticking their heads through the pig wire fence and munching on the willow shoots. I invested in a roll of chicken wire 3 feet high and attached this to the wire fence. This stopped the lambs, but the ewes just stood on the top wire and kept munching. So, I bought 8ft round wooden fence posts and drove these in 12 inches and to these I stapled the green netting. This has both made for an effective windbreak and has put an end to all munching of the new shoots. I thought this might last a few months, but for £25 was cheap enough to buy another roll. Imagine my surprise 18 months along and with a winter of fierce winds behind us, the material is just as good as when I fitted it. I used my Bosch PTK3.6 cordless tacker with 8/mm staples to attach the fabric.
This year with the new 4ft wide raised beds built I used a length of this material on top of blue one inch irrigation pipe hoops to act as a white butterfly net over the brussels sprouts and cabbages. It has worked brilliantly. My plants are tall and healthy, so no shortage of light and no caterpillar damage whatsoever!
I see it has gone up a few pence since I bought it, but still a bargain and you can find it on Ebay at https://www.ebay.co.uk/itm/Debris-Scaffold-Garden-Netting-Green-2M-X-50M-Crop-Allotment-Shade-Windbreak/272622199722?ssPageName=STRK%3AMEBIDX%3AIT&_trksid=p2057872.m2749.l2649
-1