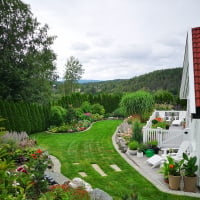 ki_buxt Son, NorwayPosts: 52
July 2019 in Problem solving
When we moved in five years ago our house only had a very poorly-established lawn (by my standards at least). I have gradually added extra soil to build up the depth and use an ecological fertiliser in small amounts, but on a regular basis. We are located in southern Norway, so the lawn is buried under snow and ice from around November to April each year. Last year we had the same heatwave that the UK experienced with 34 days of temperatures over 30 degrees Celsius and no rain for around 10 weeks . Most of the lawn did ok, but patches had died and I repaired these last autumn by resowing.

This year has been far milder, wetter and the lawn looks generally OK, but there are some brownish patches I can't get rid of no matter what I try. These have had an extra round of soil with a fair amount of sand mixed in, extra seeding, but they refuse to disappear. The blade on the lawn mower has been sharpened, but that hasn't helped either. Does anyone have any advice? Lawn care is not big here in Norway, but as the lawn is the centrepiece of our garden, my eyes seem to focus on the brown patches first, an I would love to get rid of them! Pictures follow in two separate posts as the are too large to load up with this message.
0