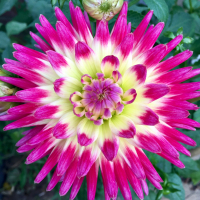 jaimelebird Posts: 38
July 2019 in Problem solving
Hello,
i am a novice gardener and have started attempting to grow Dahlias from tubers that I overwintered.
So far most are doing pretty well in pots. I have lots of healthy stems and leaves.
i am going away for 3 weeks, my brother can come and water once every 7-10 days but I am concerned that I will lose my plants.
i am thinking of sitting the pots in trays with about an inch of water due to the warm weather.
Is this a good idea or a complete no, no?
Thanks in advance.
Lisa
0
«123»