Stephanie newish gardener Aberdeenshire/Moray coastPosts: 453
May 2019 in Garden design
Hello
I've done my best to clear a big border of awfully creepy sheep's sorrel and I now have a fair bit of space to fill with suitable plants and I'd appreciate some assistance from you lovely people please.

The border is between 2.4 and 3.1m deep and about 4.1m wide, accessible on three sides. The soil is generally moist but well-drained and is sandy, supporting heathers, blue hydrangeas and rhododendrons, so somewhat acidic.

I want to keep some existing plants - pretty much everything you can see in the photos apart from the old potentilla very close to the lawn edge at one side. It used to be lovely and full of flowers but this year it looks old and straggly and reallistically is too close to the lawn. It casts shade on the things behind it, but happily has produced some self-seeded offspring so I intend to cut it down and then chop out the roots to make way for something else.

I like fairly bold colours and want more of them in the garden - we have loads and loads of green and not terribly much else so my mission is to change that.  I love the chocolate colour of the physocarpus, and there are two perennial chocolate cosmos between it and the low-growing potentilla at the far side of the border.

There is a hibiscus which only went into the ground last year after spending too many years in a pot. It has never flowered and if it doesn't flower this year I may well take it out. The other shrub is a cornus alba which does well in this border, though I deliberately haven't hard pruned it at all this year as it only went in last year.

I love the lupins and will keep them, but I'm easy either way about the primulas. There are some lavendar plants at each corner which don't do a great deal, though they have put on some really good growth so far this year.

As the border is so big I aim to put two narrow paths across it to enable me to get in for dead-heading/weeding without treading on plants or soil to do so. They will simply be membrane and bark chips, one running in a curve from the old potentilla across to the heather and the other from the near side of the physocarpus to the left side of the low-growing potentilla at the back of the border.  (By near side I mean closts to the house, and the back is furthest away, nearer the summer house)

The front of the border, the side where the old potentilla is, faces East and gets full morning sun, then the border is mostly sunny apart from the plants closest to the berberis which get a fair bit of shade for the rest of the day. That's one of the reasons for getting rid of the big old potentilla as it opens up the middle of the border for more sun.

I like a bit of a cottage garden look, though not too full-on, and am probably looking for plants that don't really exist - perennial, lots of flowers, interesting foliage when not in flower, no realy need for staking, something that will survive a fresh breeze (we are in a dip but only half a mile from the Moray coast).

I fancy some wafty grasses, something that you can see through. I thought that might look nice between the chocolate cosmos and the physocarpus, maybe more grey than green. Also any other plant that has some height but isnt so dense that you couldn't see into the middle of the border.

Bold colours are good, but all tones are welcome, and probably red/pink/purple with a bit of bright yellow or white here and there.  I'd prefer minimal faff plants too. I really like dahlias but don't have the time or patience to go digging them up for the winter, so everything needs to be hardy down to -10 or so.

I've had a good look through my plant books but whilst they say whether a plant likes sun or shade and dry or moist soil, they aren't terribly specific about the type of soil and I don't want to invest in something only to find it does not thrive in sandy soil.  I'm also not that good at envisaging what this will all look like.  It's a bit random at the moment simply because I've randomly bought plants that I like and tried to make it work with what was there, but it never seems terribly cohesive.  And of course now it looks pretty empty so I need to fill it before the weeds return.

I'd like to put a climber up the rose and would appreciate thoughts on how well that would work. It's an old dog rose that flowers just once, and then only if I've pruned it at the right time, which I can never reliably remember. On that basis I thought a climber up it would be nice and make up for the lack of flowers if I get it wrong. I'm anxious not to get anything too rampant that will just swamp it though....

Here are some photos showing it as it is, plus one or two for perspective showing the rest of the border the other side of the berberis.  The delphiniums are a lovely deep purple, the paeony is red and the geranium, mallow and other thing whose name I forget are all also purple.

Oh, and the hellebore is lovely, pale and darker pink so that needs to stay too. And I've just remembered the two red hot pokers that I rescued from under the tree-house, only to neglect them for the next two years by leaving them in a potato bag. They are now sprouting what look like new roots part way up the stem, plus have new shoots part way up the stem. That's probably because where they had been previously they were bending to get the light and never grew straight upright. I'd like to include them in the bed but don't know how best to plant them. Should I bury them deep enough that the new roots are buried, or might I be able somehow to remove the new shoots and get them to grow on their own? Photos below....

All thoughts really welcome, mainly for those elusive long-flowering plants that happily sit in sandy soil, don't misbehave, succumb to pests, self-seed rampantly and look gorgeous all year.  No pressure then! 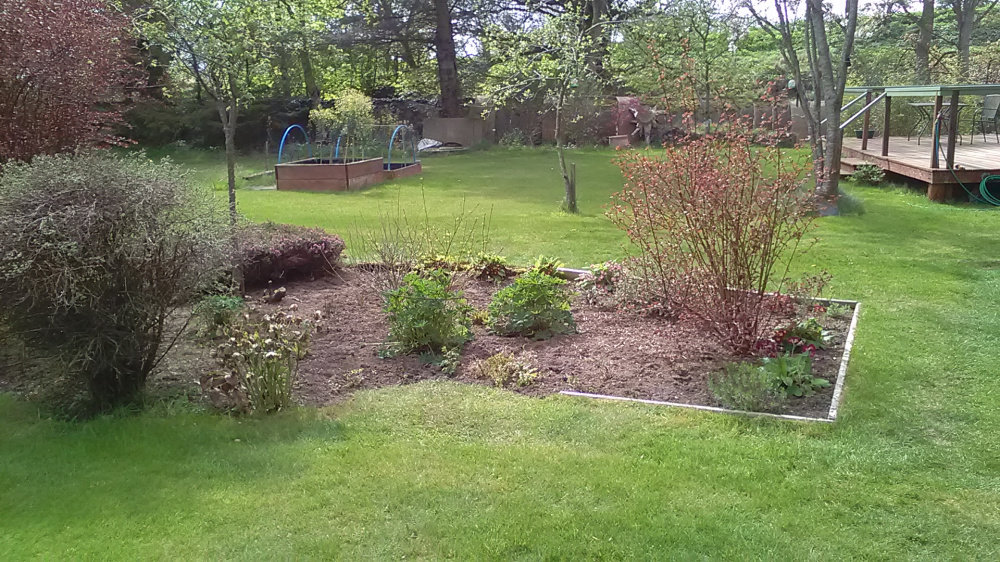 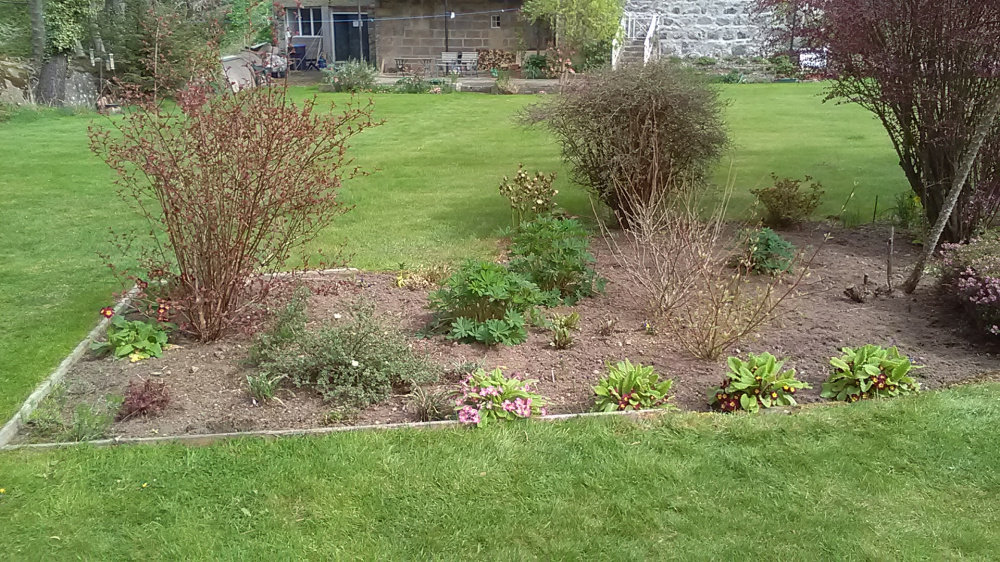 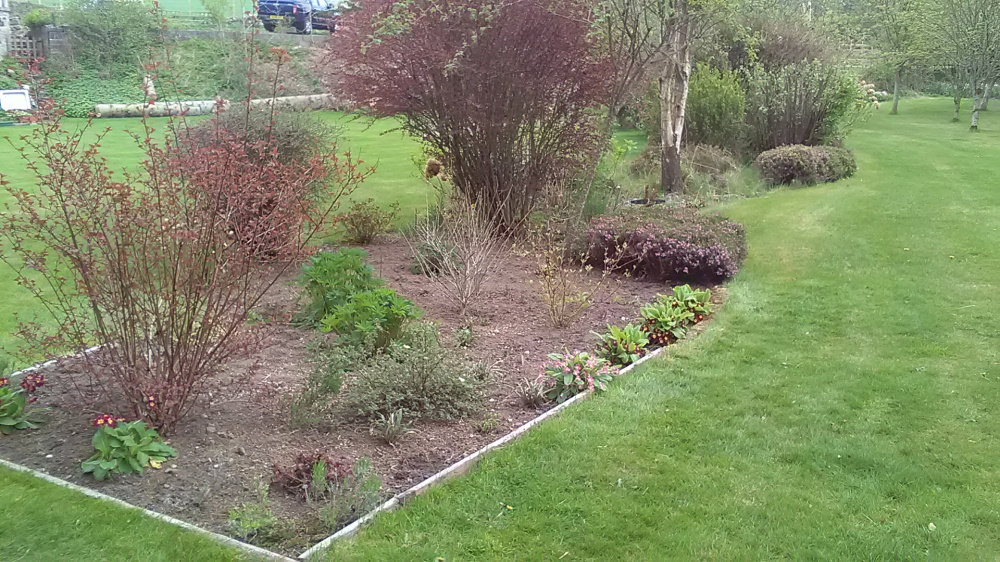 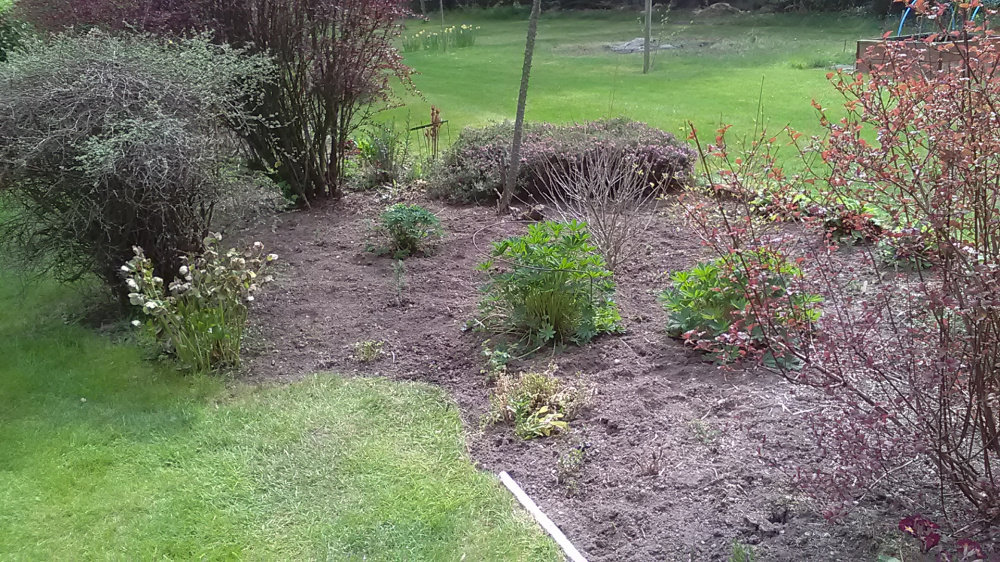 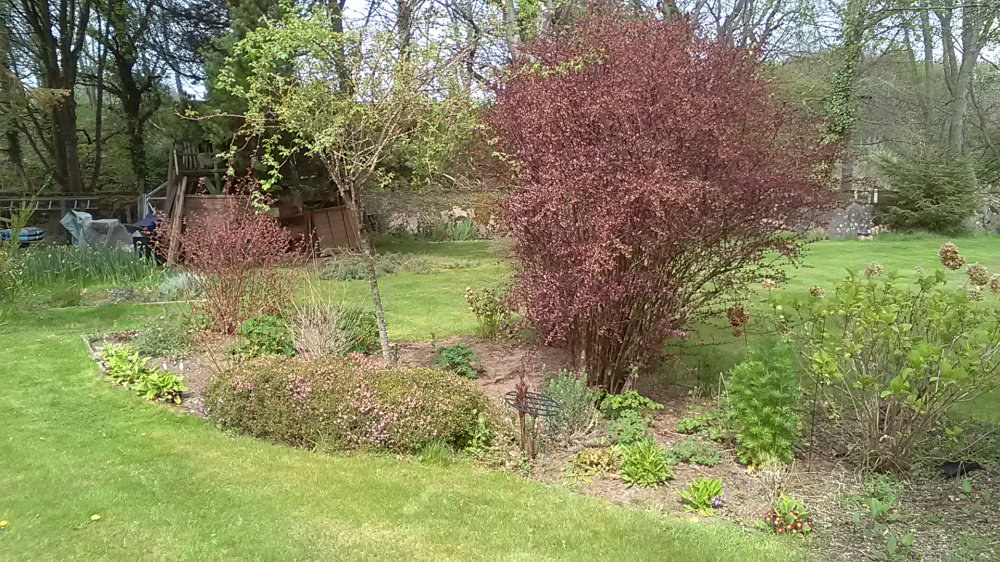 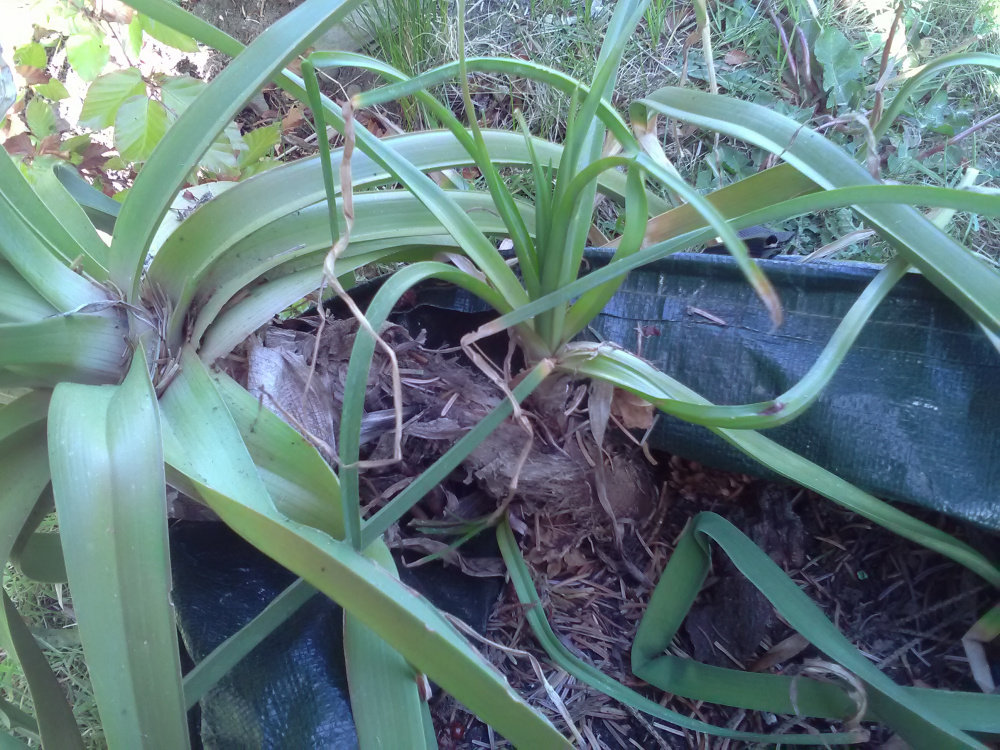 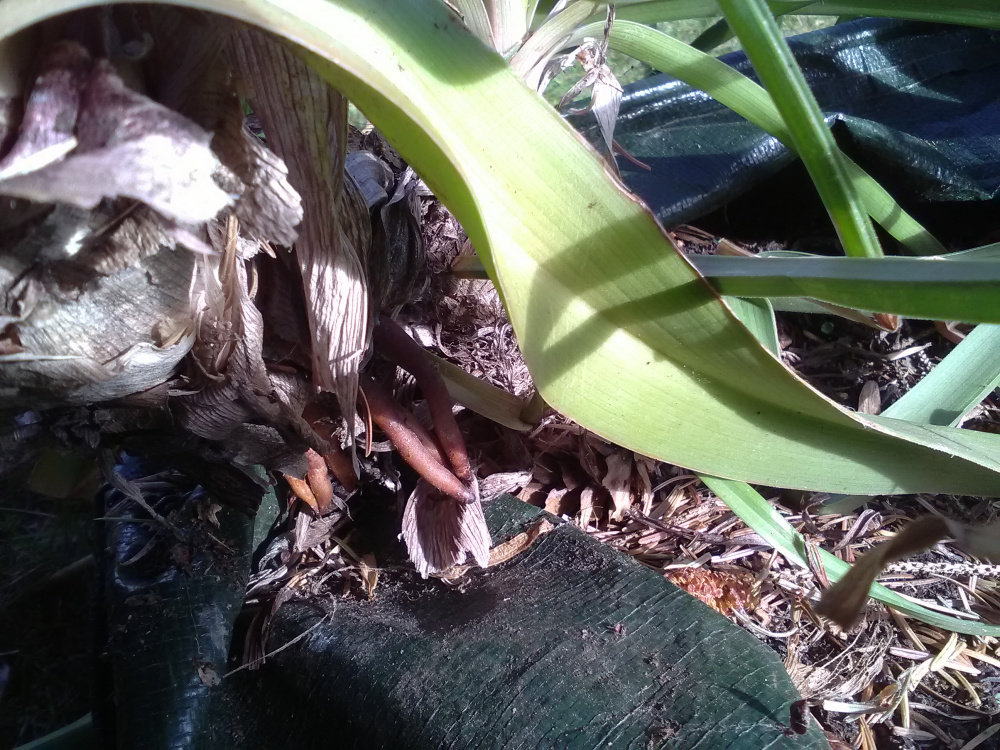 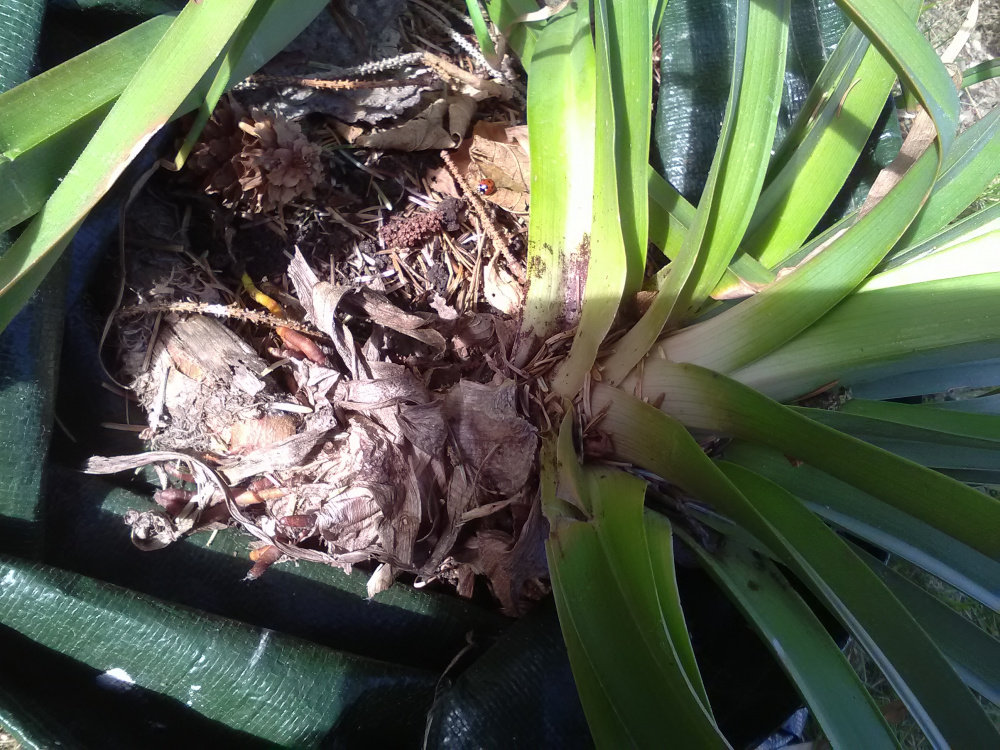