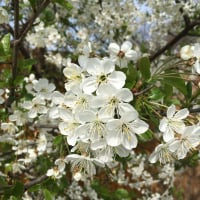 Juniper4 CheshirePosts: 77
April 2019 in Problem solving
Help needed please!!!
I hired a landscaper to do my garden and one of his young apprentice has accidentally dug up my sapling, apple tree. 😠
The apple tree was only planted in, at the end of autumn last year and it’s only established a few leaves recently.
My husband is gutted and thinks that it’s not going to survive, as the young lad that dug it up didn’t leave enough soil round the plant. 😡
We think that the sapling had a shock to the roots, as the leaves are looking a bit wilted.
Plus when they put it back into the soil. They had to level off the surrounding area round the tree (now the tree is under 6inches of soil and then there was the use of compressor too).
I’m hoping with all my might that it’s going to survive the night. 🥺
0
«12»