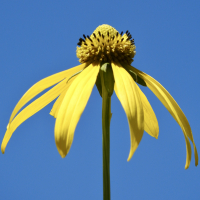 BenDover Posts: 480
April 2019 in Wildlife gardening
I live on a fairly modern housing development (probably about 25 years old now). The estate is on the site of an old hospital site which was closed and then sold off in the 1980/1990s.  I moved here about 10 years ago, and have been really into my garden for most of those years.  However, one thing that strikes me when I'm digging is the distinct lack of worms in the soil.  I did read that when they build new estates they take off all the top soil (and no doubt worms with it), and then put the soil back when they've finished, but seemingly what comes back isn't the same as what left with the result the worms don't get returned.  However, I would have thought after all these years there would be a bigger population of worms in the ground then there seemingly is.  Yesterday I dug over a whole border that I want to rejuvenate and I found only one worm in the entire day.  Either they heard me coming or there simply isn't very many at all.  My soil is quite a sandy loam so not sure if this has any bearing on worm population.  I am thinking of ordering some worms from on-line (found somewhere you can buy 100 worms for £21) and wondering if this would be a good investment to try and increase the population in my garden.  Of course, I'd speak to them all individually to tell them to stay and no snake off to my neighbours.....!!