Watering a greenhouse peach tree planted in the ground 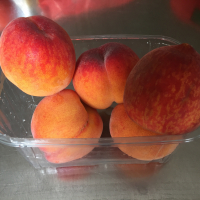 I am looking for advice on when I should start watering my peach tree. Based in scotland I have a peach tree planted in the ground inside my greenhouse and I’m never sure when I should start watering or even if I should be watering it over the winter months. Although I got around 20 juicy peaches from the tree last year I had a big problem with deformed fruit that had to be removed and I read somewhere it was because the tree didn’t get enough water in the summer months the year before so again some general advice on watering would be greatly appreciated!