What to plant in a narrow, tall trough 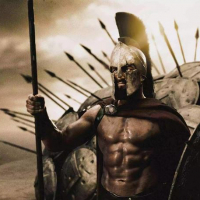 My back garden is paved (not my preferred choice but at least it's nicely done) and the back wall is a rather unsightly red brick (1.8m high x 4m wide).
I'd like to put some troughs similar in size to these along the back wall and grow something to hide the wall (so the taller/more it covers the wall the better).
The area is pretty windy at times. I am absolutely fine with building a trellis or any other structure to support climbers (I cannot physically attach anything onto the wall itself unfortunately so everything has to sit just in front).