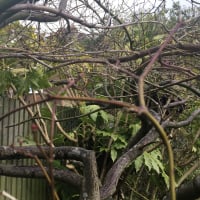 jamesharcourt West SussexPosts: 465
May 2018 in Plants
Hi again.  I have asked before about our moved Acers but thought I would expand and add more pictures in a new post.

I live in Sussex, UK - where the weather is mixed and unpredictable at the best of times. Our soil in this area is clay heavy, but our lawn and beds etc. have had compost worked in over the course of time.

We inherited some mature Acer speciments when we moved into our house about 10 years back and - to be honest - I did very little with them except enjoy their foliage each year and just let them grow naturally.
One of these acers might be a "Red Filigree Lace" variety (or similar) - and the green one, I have no idea. Since we inherited them I don't know their history.

In winter just gone, we redesigned our garden a bit and took the tough decision to dig up and move the acers as they had been growing around a greenhouse slap bang in the middle of the garden - and we wanted to open up the space, removing the greenhouse. We got a couple of guys in with a digger, they dug up the tree with a decent sized rootball and the trees were moved mostly with the soil that had been excavated in the dig-up process. Some root extremeties must have been lost and some branch pruning took place and some bark damage occurred during the move. I couldn't watch, tbh. I had just watched a video of an American guy who had done it routinely and he made it look easy.

We had buds all over the trees at the time but these looked shrivelled and dead when I looked ... although I didn't look at every one. When Spring arrived and things warmed up here a bit (March) the trees produced foliage which made me think "we're there, they've survived". I dug in a small amount of vitax Q4 fertilizer pellets into the surrounding soil and things looked good for a good few weeks.

Now we're just about in June and we've had some very hot and dry weather, with some occasional downpours (such as today!). Our soil is generally heavy clay but compost has been worked in over the years and the soil the trees were planted immediately in wasn't the really heavy horrid clay stuff.

Anyway, I wanted to show a picture of the two trees. The problems I see with each are:

Green acer problems:
- wilting leaves early, a slow wilt starting at the bottom branches
- a lack of new growth and further leaf formation, despite green healthy growth at the extremes higher up

Purple acer problems:
- thin on the foliage
- lack of new growth forming (mild wilting on a few leaves but nothing like the green one)

I've included pictures of both trees below, one of which shows the moisture level on each (basically wet ground). I don't believe it is waterlogged, particularly as we've just had two successive 'early' heatwaves here, but the moisture meter shows wet - although this isn't a problem for other acers growing nearby (younger ones), which show the same level. I realise Acers don't like wet roots. I should point out that this moisture level would have been similar for the last ten years given that the UK is famously inclement!

Anyway, if anybody experienced can offer an assessment, any advice etc. I'd be most grateful. I am a little out of my depth here, I was even planning to take some cuttings and try to grow them to prepare some attempts at long term replacements. 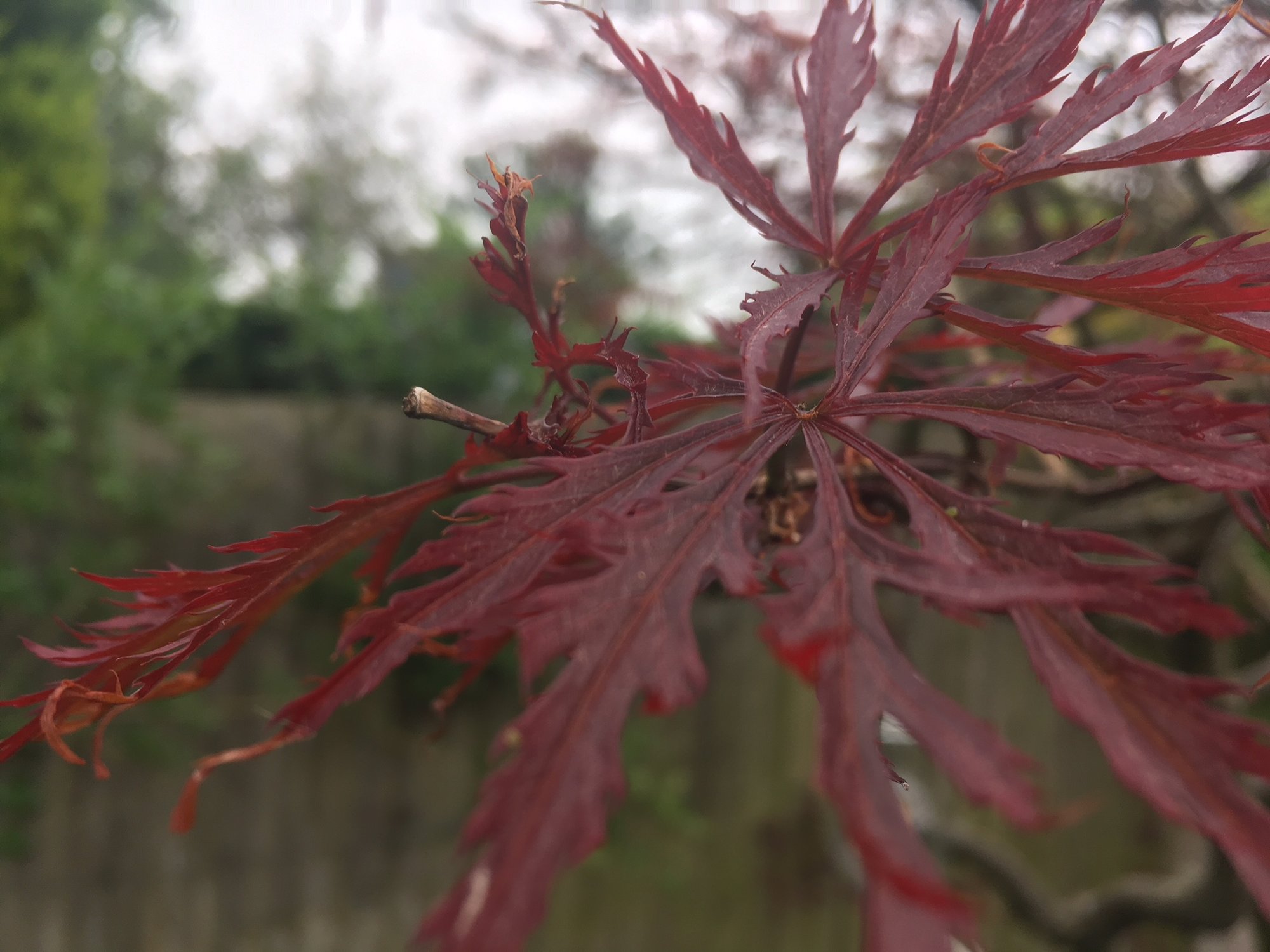 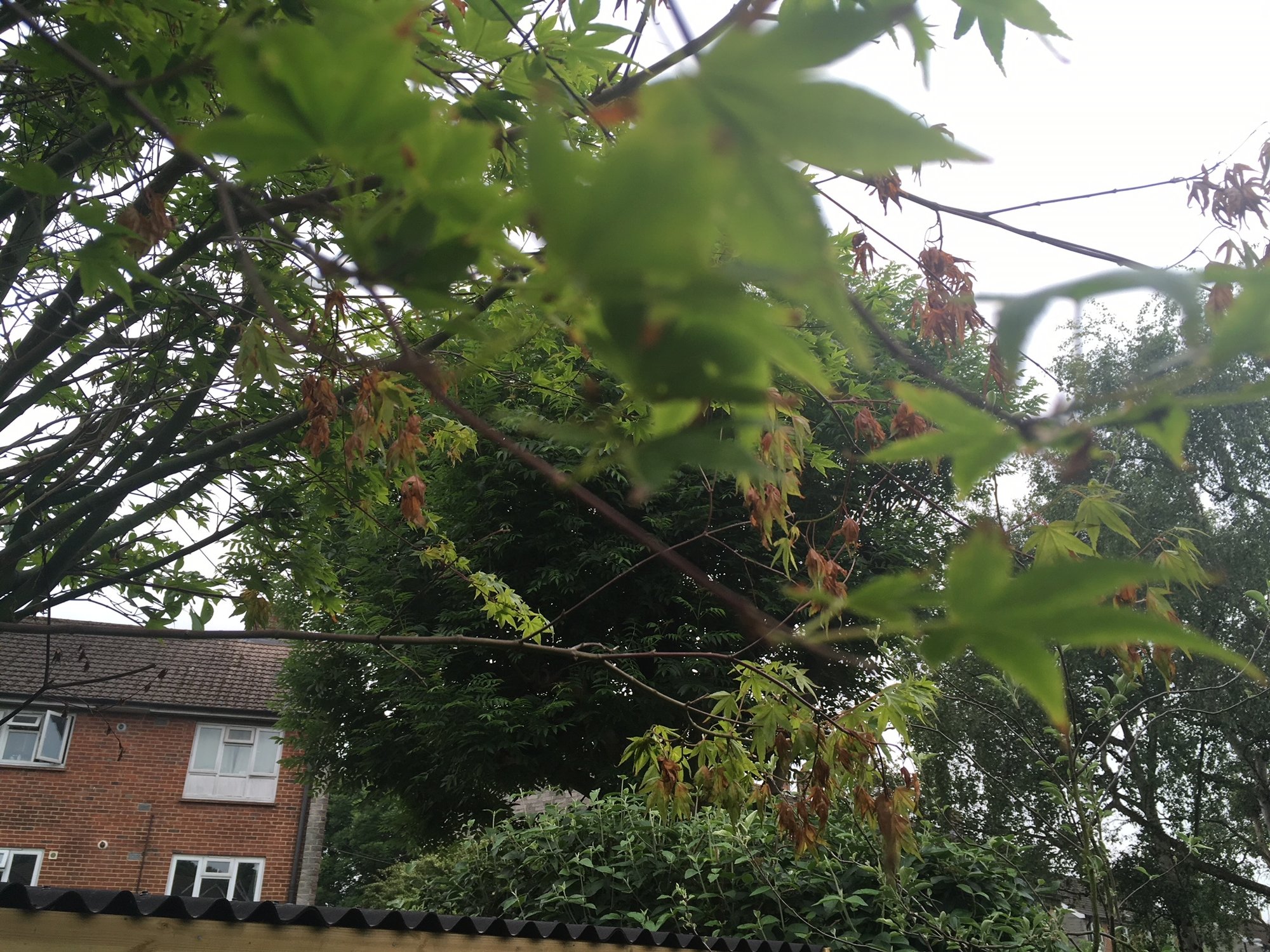 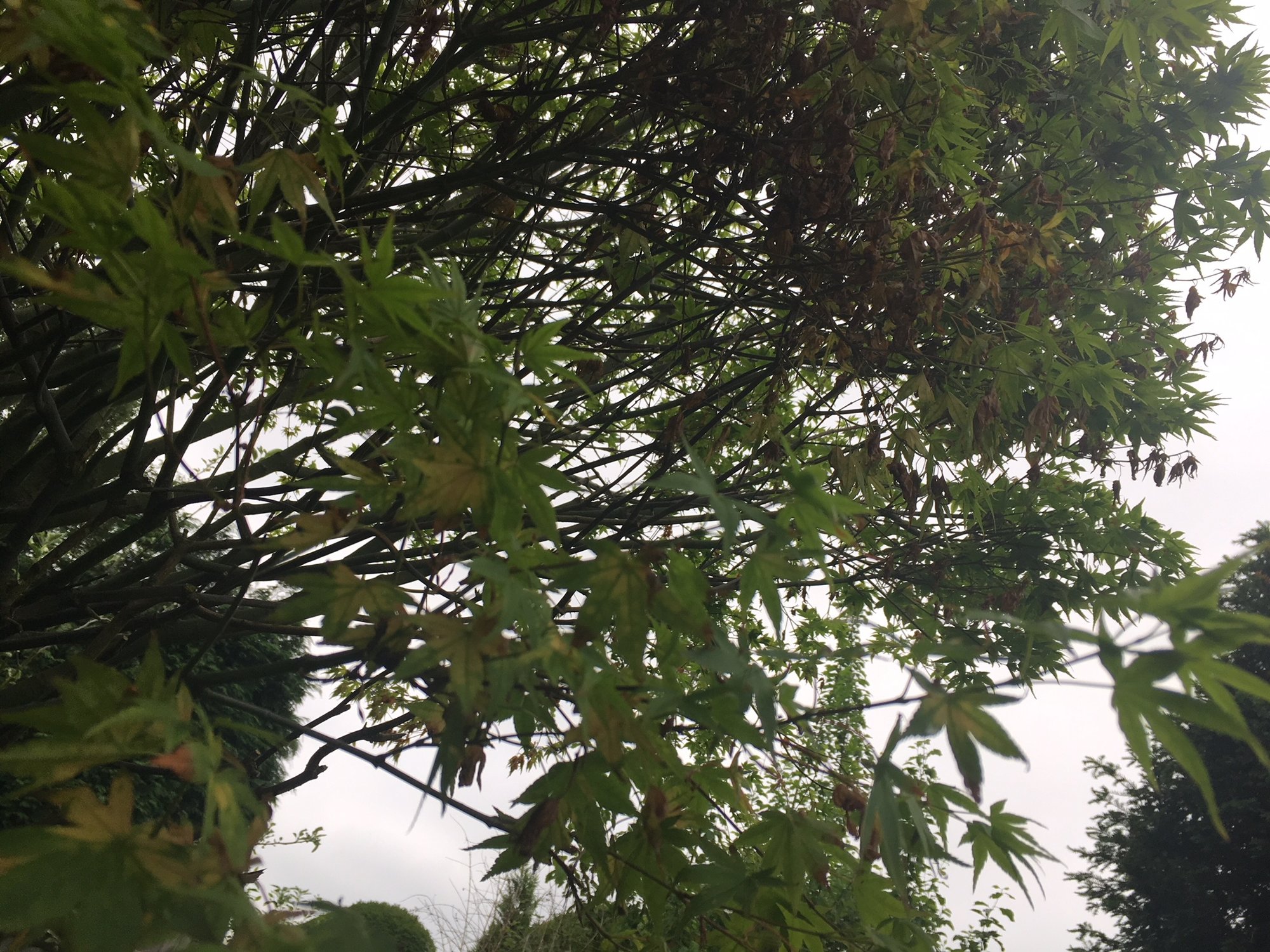 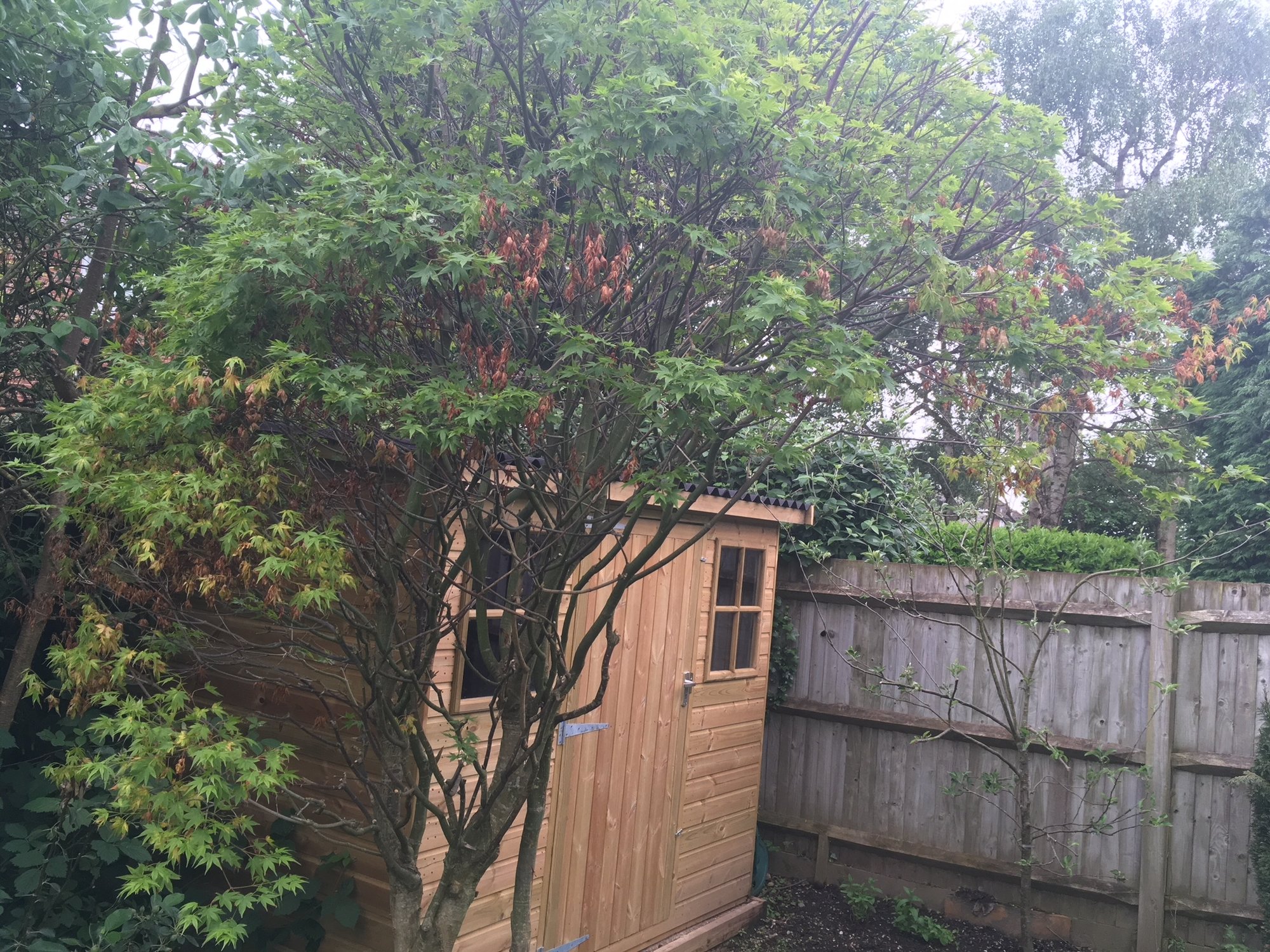 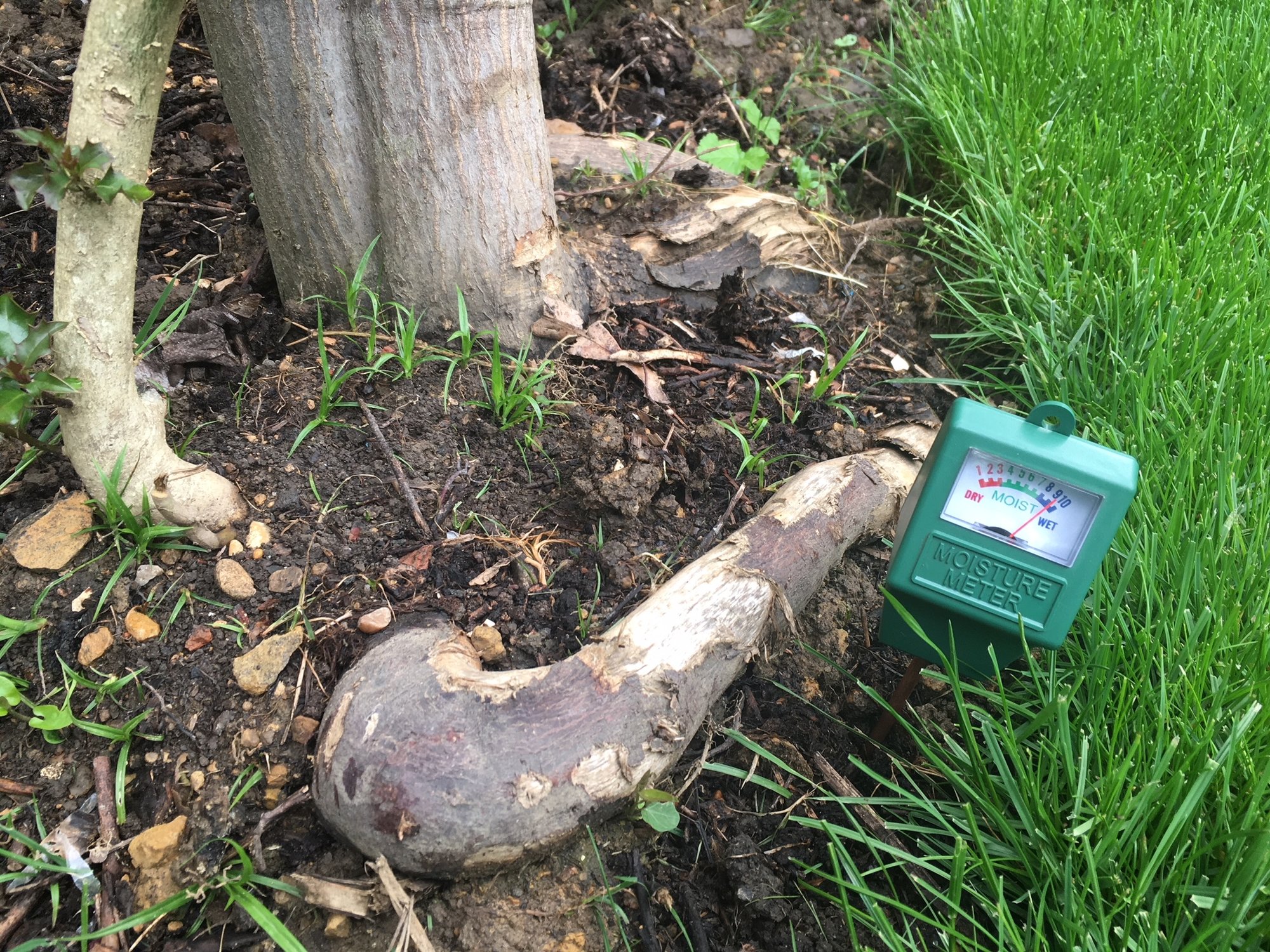 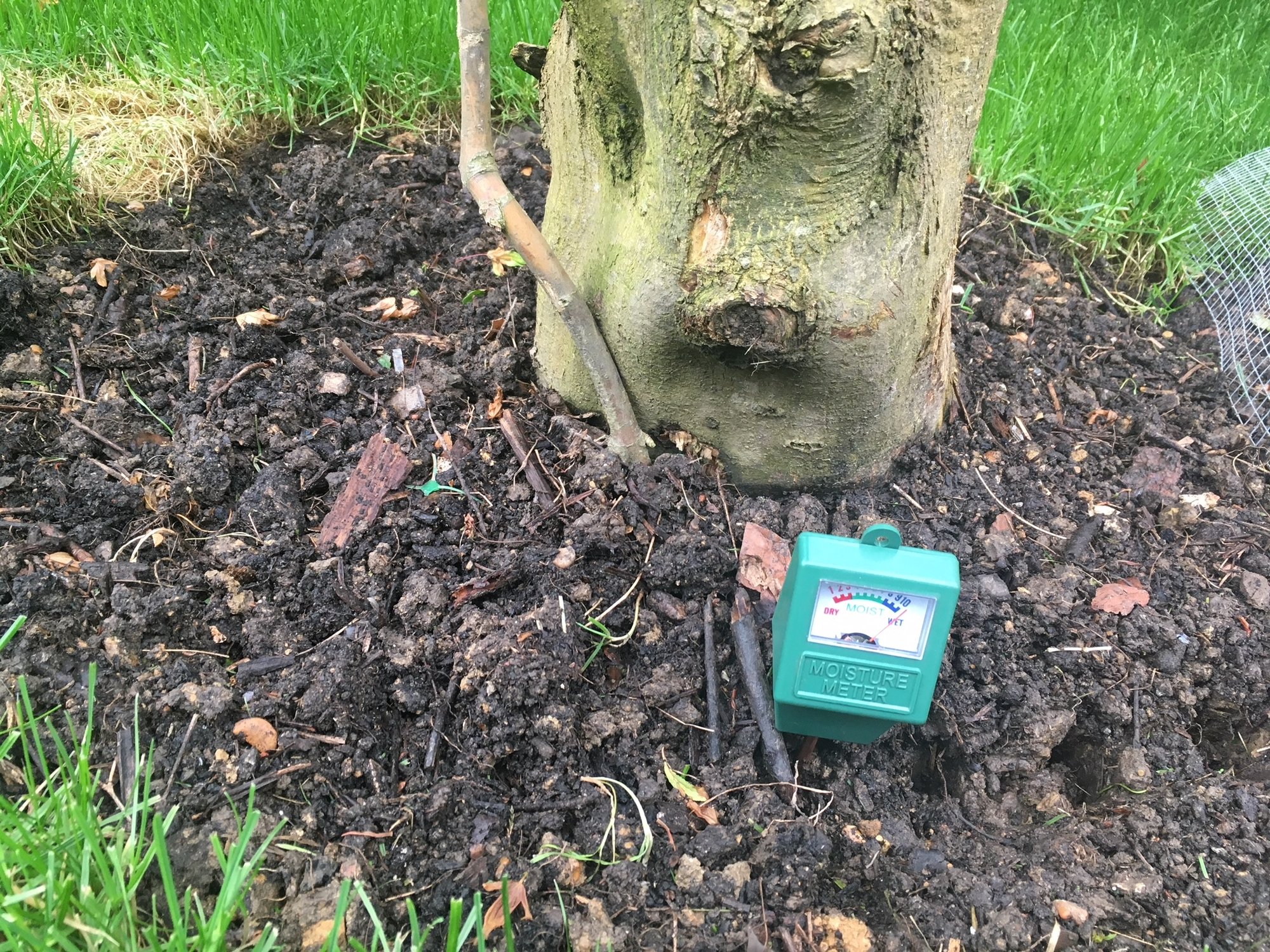