paul_in_surrey Posts: 239
April 2018 in Problem solving
Hello everyone,
I live in a small block of flats with a communal garden. We're not allowed to do any gardening as such, which is why I've got an allotment and try to grow things in containers. Anyway, we have an area for the refuse and recycling bins that last winter became a mudbath and someone just put down big bits of cardboard so they could walk to the bins but that became horrible very quickly. So, we invested in some overlay, the plastic stuff with hexagonal holes. We laid this on new topsoil and sowed grass seed beneath. It worked really well during the summer and we could even mow the grass growing through it.

Now during our even soggier winter the overlay has started sinking into the mud below and looks pretty terrible and doesn't do the job it was intended to. This is shown in the pic below, and this is after we lifted and cleared the mud off it. My question is whether anyone has any experience of treating the ground beneath these overlays. I was wondering whether putting a mix of gravel and topsoil beneath it would stop it sinking, but still allow grass to grow through. Otherwise we may just need to lift and re-lay on new soil and seed each year. More a grounds-keeping question than gardening I'm afraid, but hoping someone has some experience with this.
Thanks 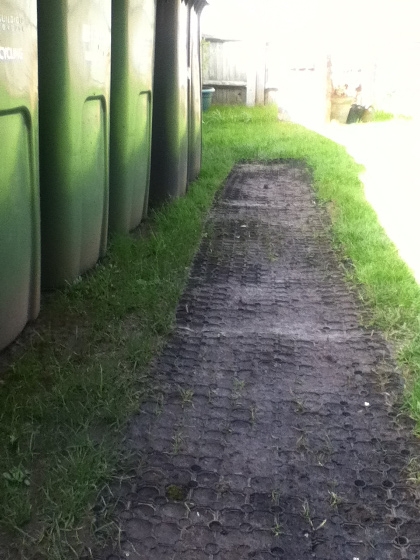 “Success is the ability to go from one failure to another with no loss of enthusiasm.” Winston Churchill
0