I recently moved into a house with both a front and back garden (which is a novelty for me, having moved from a maisonette with a small decked area). I've not really before been all that interested in gardening, but now I have the opportunity, it's really piqued my interest.

Clearly there's lots to do - but I firstly wanted to get the basic structure of the boundaries sorted, there's a mixture of various wooden fence styles, a stone a wall, an historic brick wall, and a wire mesh with a nascent hedge on the other side. Just going on a walk in the local area for inspiration, it's clear that fences are by far the most popular, but I didn't see a single fence I really liked. And more often than not, they are rotting at the edges (particularly the bottoms).

I have a plan the previous owners had made of the existing layout for planning permission, which serves as a handy reference for this post. For scale, it's about 10m at the front, 20m at the back (which is SSW facing), and around 10m on the little side area: 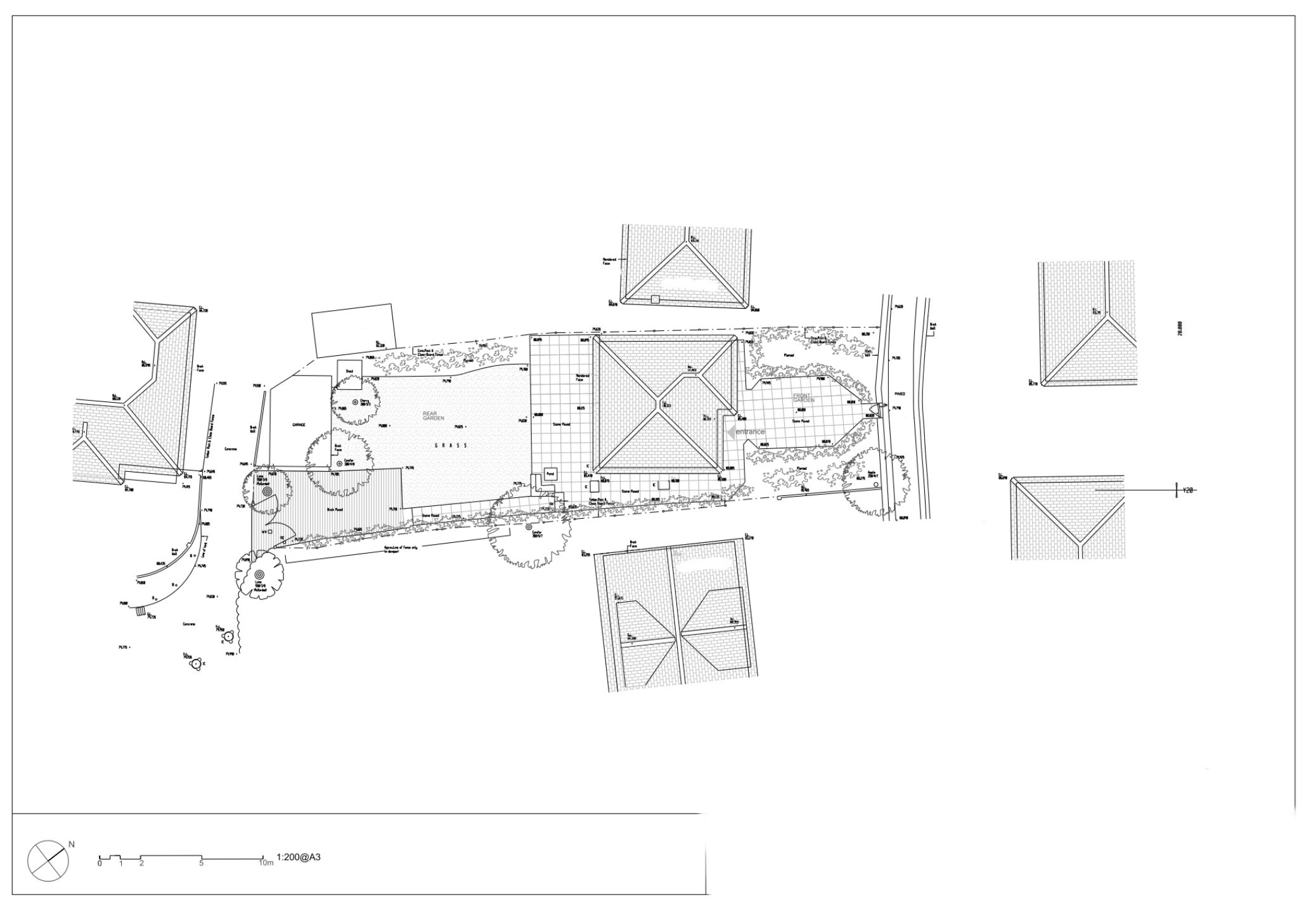 The front is a bit unusual in that it's a ~200 year old walkway, with a 3.3m high wall (which I absolutely love, incidentally).

So per the topic, my question is, what would folks here recommend for the boundaries?

I wondered about reclaimed or old-looking red brick, but for the full 40m or so each side, I figure that would be eye-wateringly expensive?

What I think may be more reasonable is old red-brick either side of the front garden, to complement the existing front wall (though would be limited I think to 2m to avoiding shading neighbours). I'd have to ask the neighbour about changing the existing stone wall (or building in front of it). We have already bought two espalier trees to go against the front wall, and I'd like to have them either side too - hence wanting to have something more permanent than a fence.

What to do about the back though I'm not sure - the wire fence to the left looks like we could just wait for next door's hedge to grow through. However, I'd like it to be symmetrical with the other side. What I like about the wire fence is that it would seen to be well supported, will need little maintenance, and that we can train things against it.

Training things against wooden fences doesn't seem like it would work well long term, as plants would get in the way of maintaining it with wood stains/sealant.

Here's some further photos for reference.

The back garden (SSW facing): 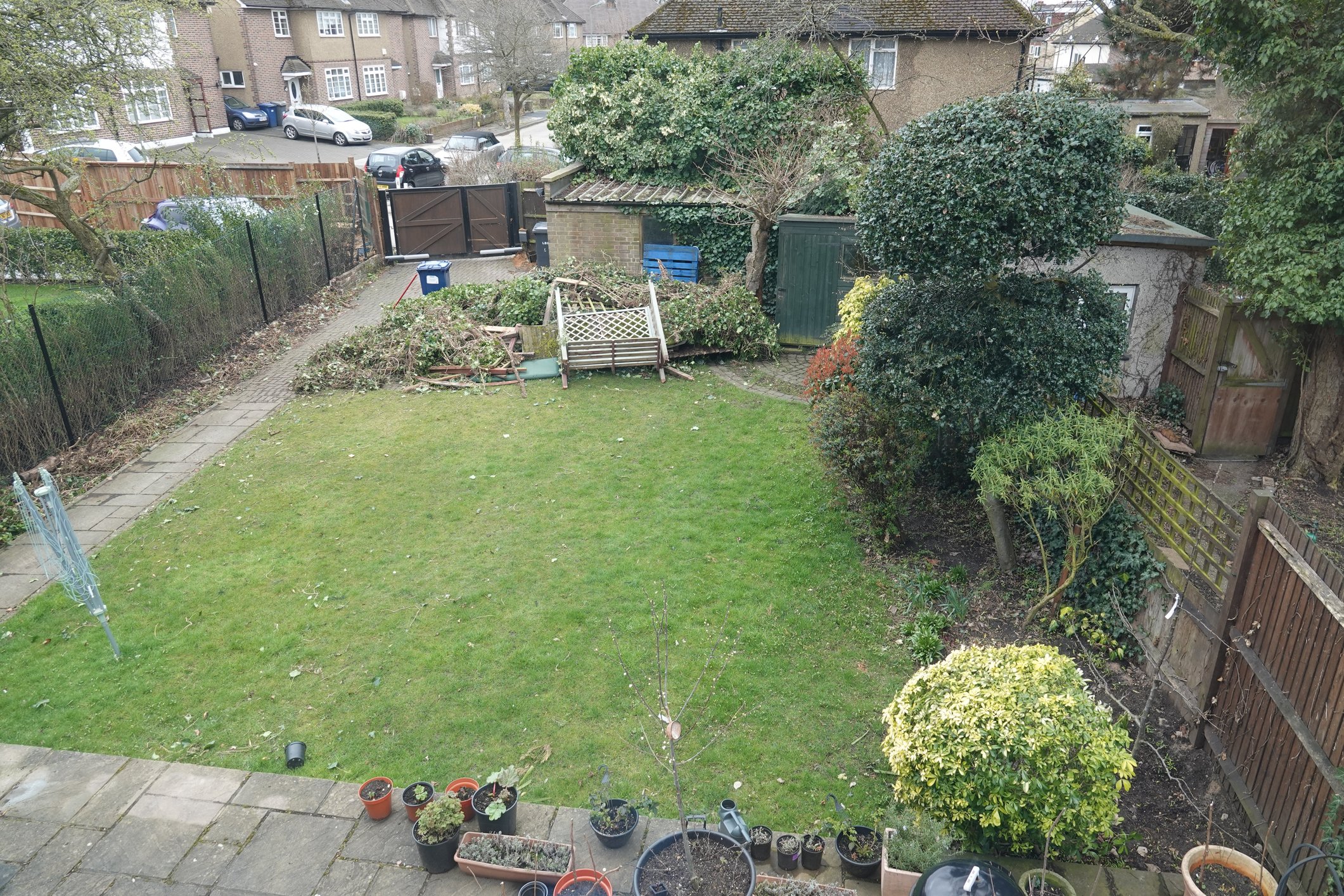 Front garden, right-hand border, hedge with a large gap, and rotting fence behind: 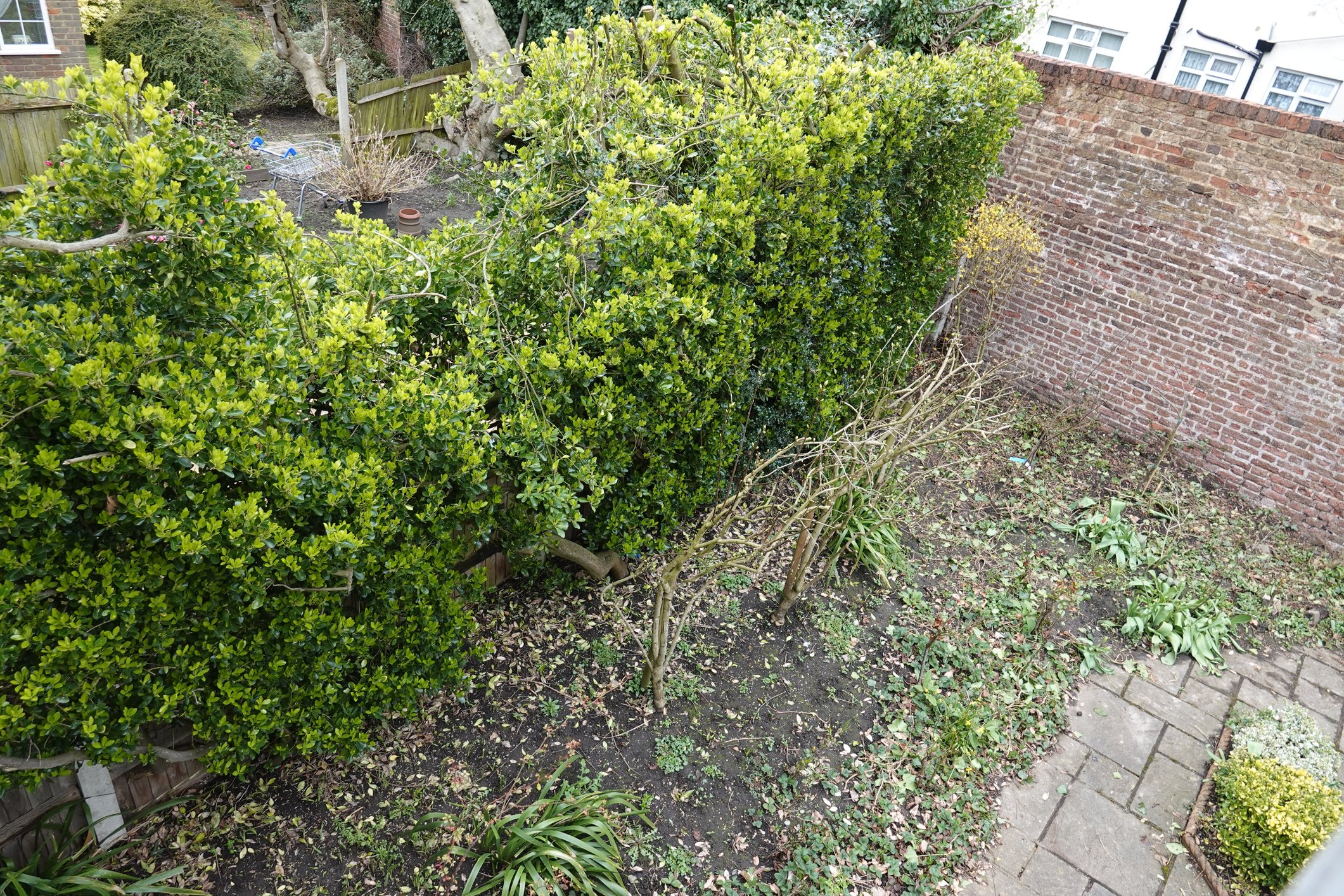 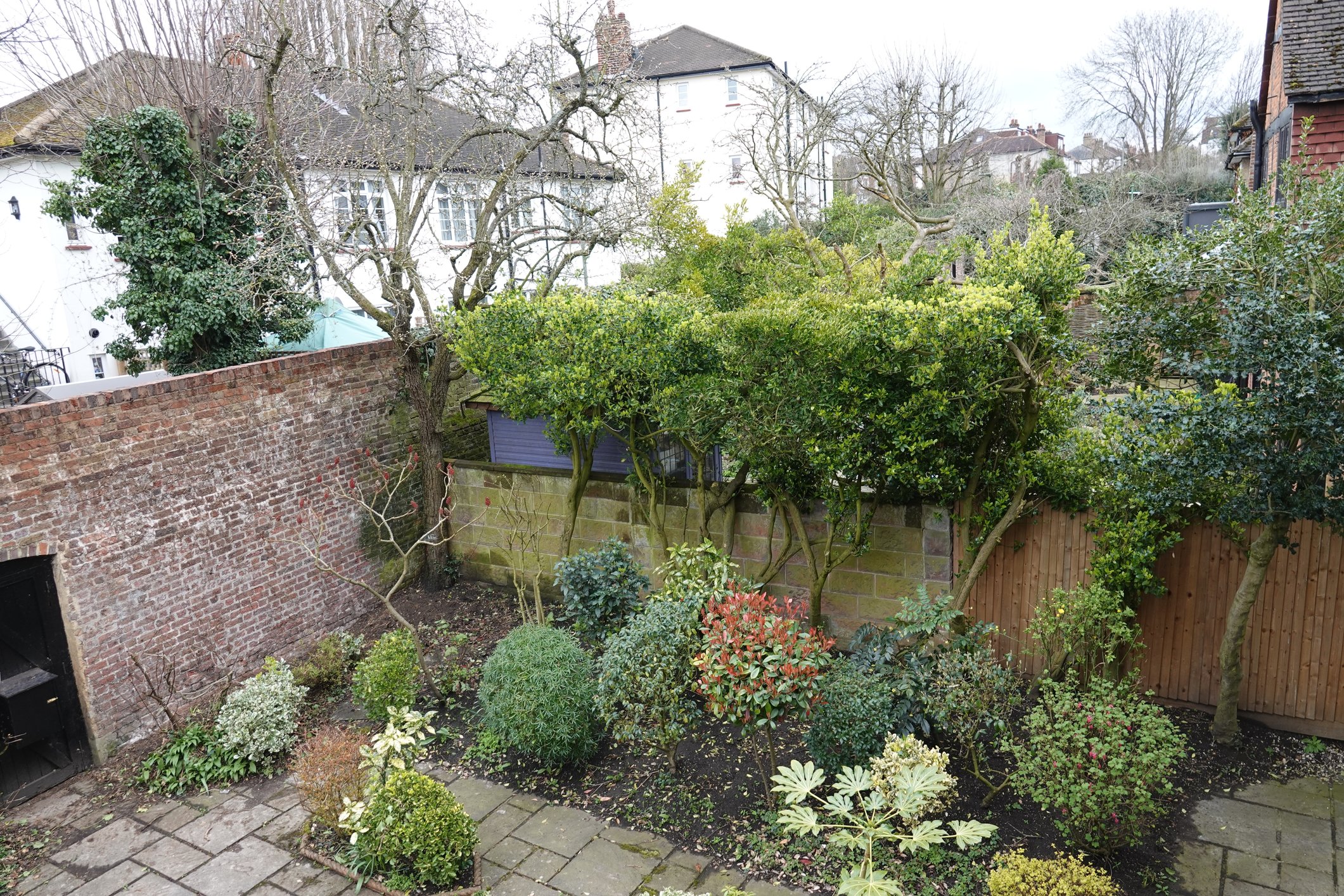 Front garden NNE facing, historic 3.3m high wall (the side you can see is SSW facing, and far enough to avoid shade of house). About half the garden is in the shade of the house this time of year (April): 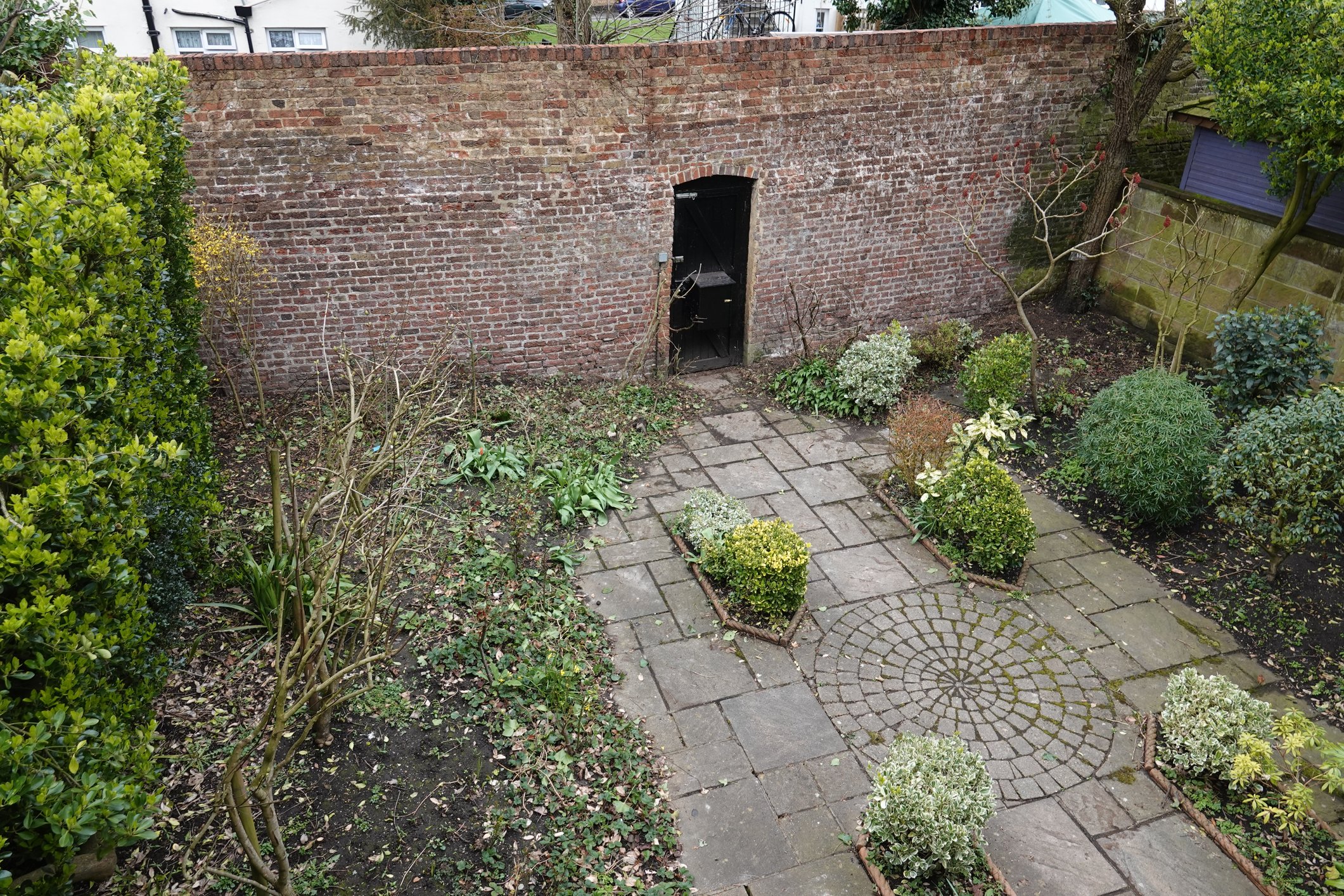